The pandemic is teaching able-bodied people what it’s like to be disabled. Not being able to get around like you used to, facing endless unemployment, being stuck in the house, finding ways to get food delivered, and speaking to family and friends only on the phone — not in person. 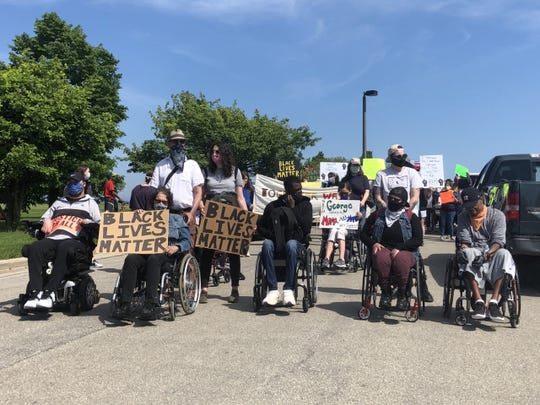 Joanie Marquardt commented at the July 8 Workers World Disability Rights Caucus meeting: “People are getting infected and becoming immediately disabled to some extent. If they survive, they remain somewhat disabled. The world population is getting a feel of what it is like to be restrained by a health care crisis. This is the best time to talk about disability and to raise consciousness on it because we all have just gotten a taste of it in the last few months.”

The caucus is presenting a webinar on “The ADA is not enough: Disabled People need socialism to end ableism, racism & all bigotry” on July 30 at 8 p.m. EDT. For more information, contact [email protected]

On March 12, 1990, over 1,000 disability rights activists from 30 states descended on the U.S. Capitol demanding passage of the Americans with Disabilities Act. After the rally, over 60 activists abandoned their wheelchairs and mobility devices and began crawling the 83 stone steps up to the U.S. Capitol building entrance, as people loudly chanted “What do we want? ADA! When do we want it? Now!”

The ADA was passed a few months later on July 26, codifying further than in previous U.S. history our right to access and other civil rights. Before COVID-19,  there were many parades to celebrate our ADA victory, and this month there will be virtual celebrations at Disability Unite (disabilityunite.org).

But the ADA has not been enough: Some 80 percent of NYC subway stations are inaccessible — still without elevators. Many restaurants and shops have stairs, but no ramps at their entrance.  Many voting places lack accessible equipment for blind folks, although they are paying taxes.

Half of people killed by police had a disability

If you are a disabled person of color, you have to be very careful how you react to the police.  Not following their commands in a split second could lead to your murder.

Disability rights journalist David M. Perry, whose son has Down syndrome, documented, in research for the Ruderman Family Foundation, that as many as half of all people killed by police had a disability. (tinyurl.com/y7hau3fu) A June 24 New Scientist article warned that U.S. police kill up to 6 times more African Americans than caucasian people.

It is no accident that many folks in the Disability Community support the Black Lives Matter movement and the national rebellion following the racist police murders of George Floyd and Breonna Taylor.

In addition to marking the passage of the ADA, July 26 is the anniversary of the storming of the Moncada barracks on July 26, 1953 — the spark that led to the Cuban revolution of 1959.

Jean Bowdish, a member of the Workers World Disability Rights Caucus, participated in the 3rd (1970), 20th (1989) and 50th (2019) Venceremos Brigades. Bowdish told WW:  “I have worn hearing aids for over 15 years. Getting hearing tests and hearing aids is a challenge in the U.S. Insurance and Medicare/Medicaid cover only a small portion of the cost of a pair of hearing aids, which can be $3,000 per hearing aid.

“When I was on the 50th anniversary Venceremos Brigade to Cuba in July 2019, I was part of the group that visited the Center for Neurosciences of Cuba (CNEURO). One of the advances being made by CNEURO is in hearing devices. Scans are taken of the ear canal so devices can be created to fit a specific ear. An additional benefit is that hearing aids in Cuba are at a very low cost or free if needed — around $1.50 in 2014.”

As a great leader of the Cuban revolution and a person with the disability of asthma, Ernesto Che Guevara once said, “If you tremble with indignation at every injustice, then you are a comrade of mine.”