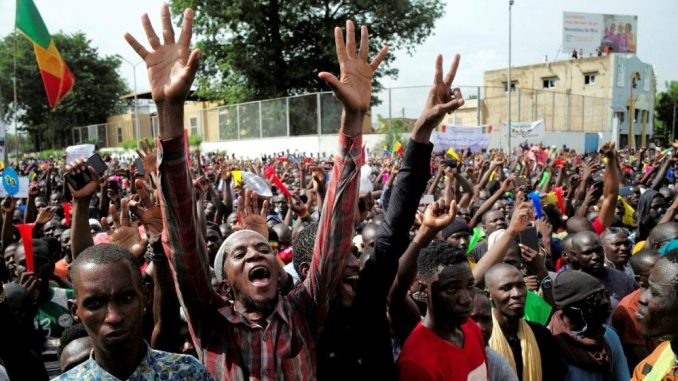 Tens of thousands of Malians in the capital Bamako came out in the streets July 10 for three days of protest demanding the resignation of Mali’s president Ibrahim Boubacar Keïta (IBK).

The government reported that 11 people died and 158 were wounded. The June 5 Movement: Rally of Patriotic Forces, one of the prime forces in the opposition and the protest, said casualties were much higher.

Protesters blocked Bamako’s streets with burning tires and piles of trash, erected barricades and shut down the capital city. Organizers sent small groups from the Monument of Independence, one of the gathering spots, to occupy the TV and radio station and legislative offices. Cops had to pry out the occupiers with tear gas, but not before offices were trashed and cars burned. Demonstrators blocked bridges over the Niger River. (Maliweb.net, July 13)

The reasons different groups give for demanding that President Keïta resign vary, but generally include: He is corrupt. He has not made the problem of hunger in Mali a priority. He manipulated the recent legislative elections.

The Economic Community of West African States (ECOWAS) sent a team to Bamako the third week of July to mediate between the opposition and the government. Headed by Nigeria’s former President Goodluck Jonathan, the team had made no progress by July 20. A number of countries neighboring Mali express concern that Mali’s troubles could be contagious.

Mali’s 20 million people inhabit a half-million square miles of territory in West Africa. While there has been a UN-sponsored peacekeeping mission in northern Mali since 2013, France also has 4,500 troops in Mali who aggressively prop up IBK’s government. France is the former colonial power and leading imperialist power in Mali, where French is the official language. Mali’s currency is tied to the Euro.

The French military deployment gets essential logistical support from the U.S. AFRICOM command and intelligence from the U.S. drone base in Agadez, Niger.

In early June, a group of French helicopter gunships engaged an armed group that opposes the French presence and the Malian government, in the area where Mali borders Niger and Burkina Faso. The French press sometimes calls these groups jihadists, sometime drug smugglers, sometimes Islamic militants. The groups have no apparent affiliation with political forces agitating in the western part of Mali around Bamako or ethnic militias in central Mali.

The armed insurgents managed to shoot down one of the French helicopters, but the pilots and gunner survived. Another helicopter landed under the insurgents’ fire and managed to rescue the three wounded French fliers by the skin of their teeth.

A month later the footage of this rescue, with video of the helicopter going down and interviews with the rescuers, was shown with great fanfare on France TV2 the day before Bastille Day, July 14 — the day when the French imperialist bourgeoisie celebrates its military.

On Bastille Day itself, Army Minister Florence Parly gave solemn assurances on France TV2 that France was going to keep its troops in Mali for “Operation Barkhane.” She said that despite the COVID-19 crisis, the French must celebrate their army and its victories.

The Sahel, which includes parts of the countries of Mauritania, Senegal, Mali, Niger, Burkina Faso and Chad, has had to confront pandemics like SARS and Ebola in the past few years, but COVID-19 has turned into a virus of hunger in the Sahel. The pandemic intensifies the disruptions caused by global warming and the low-level armed conflicts in central and northern Mali and in neighboring Burkina Faso and Niger.

Closure of the borders between these countries required by the conflicts has had some unintended consequences, both for the subsistence farmers and herders in these countries.

July through September is when most of the farmers plant crops in the Sahel. They buy their seed on the international market, which means — for landlocked countries — truck shipment across borders.

Herders, whose migration corridors follow the logic of geography, rather than the distorted schemes left over from the region’s colonial past, have seen important markets and major grazing areas closed. (Le Monde, July 15)