While executions are nothing unusual in Texas, the state outdid itself last week. It not only executed Billy Wardlow, but then its church liaison for the Texas Department of Criminal Justice used the viewing of the body by loved ones to verbally attack Wardlow’s fiancée and her friends.

Wardlow had been an 18-year-old kid when he accidentally killed a man during a scuffle for a gun. He was trying to steal a car to leave Texas and run away from a childhood filled with abuse and neglect. He regretted the death for the 25 years he spent in prison.

After all that time behind bars, Texas then murdered him July 8. 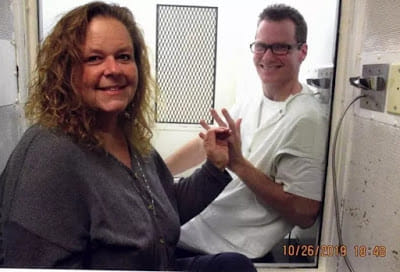 Following Texas executions, the funeral home hired by the prison system takes the bodies to Grace Baptist Church in Huntsville so families and loved ones can finally touch and talk to them one last time, without glass separating them.

On July 8, Gina Bradford, the prison system’s liaison for families whose loved ones have died while in prison, interrupted Danielle Allen, the fiancée of Wardlow, in the church as she was sobbing, touching his face and softly speaking her goodbyes to him. Wardlow had asked that photos and videos be taken of him after his execution and friends were quietly doing that.

In the video, one can hear Bradford say, “Okay, enough with the pictures, okay? Normally, we have been stopping y’all from coming inside the church because this is not the time or the place for that.” The two women taking pictures calmly told Bradford that Allen had asked them to take pictures as Wardlow had wanted.

But Bradford continued disrupting the quiet of the church by declaring, “Next time if we let you in, don’t wear your shirts okay? Or we will not let you in at all.” The shirts were yellow with the words “Abolish the Death Penalty” on the front and were signed “Texas Death Penalty Abolition Movement.”

Allen was ignoring the rude interruption as Bradford continued, “I don’t have to let you in here. I have taken my day, my time, so you could be here.”

That was the breaking point for Allen, who raised her voice for the first time. “Excuse me! Your day? Your day? I have just lost the love of my life and you’re talking about your day. Just shut up!”

“I’m letting you be with him. I don’t have to, but I am,” Bradford said, refusing to give her name when asked. Allen told her she would find out her name, adding, “She ruined my last minutes with Billy.”

Thanks to friends who recorded this traumatic treatment and thanks to people who posted it on social media, the video went viral. The family of an innocent death row prisoner, Rodney Reed, tweeted it, as did death penalty activist and spiritual advisor to people on death row, Sister Helen Prejean. Activists posted the video on Facebook. This continued all night long.

Before noon the following day, the TDCJ was forced to disavow Bradford’s behavior and posted on its Facebook page: “The woman in the video is not an employee of the TDCJ nor does she represent the views of the agency. Loved ones should have the opportunity to grieve. The agency has addressed the issue to ensure she is no longer involved in the viewing process and moving forward TDCJ chaplains will remain on site to ensure this does not happen in the future.”

TDCJ was quick to cover itself from the outrage of activists around the world. According to many of them, including this reporter’s experiences, the truth is that Bradford’s behavior had usually been rude and disrespectful. It will not be a solution for ministers who work for the system to be present at the church.

The only solution for grieving families is the total abolition of the racist, anti-poor death penalty.