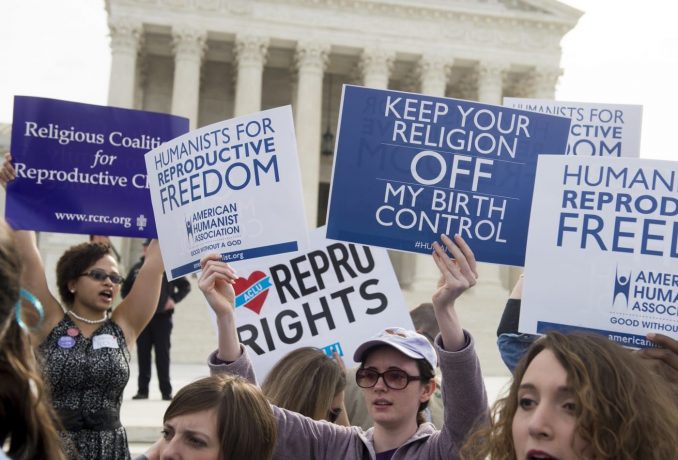 The one potentially affecting millions of women and gender nonconforming people of reproductive age (15-44) and their families involves the contraceptive mandate in the Affordable Care Act. This is the third time the court reviewed the issue in the last six years. (SCOTUS rulings on other religious topics will be covered in a future article.)

Setting the stage is the fact that the Health Resources and Services Administration, an agency of the U.S. Department of Health and Human Services controlled by the President, ruled under Obama that birth control was essential “preventive care.” According to HRSA, that meant it would be free, covered by the employer’s insurance without copays or cost-sharing.

The first case in 2014 was Burwell v. Hobby Lobby. The court ruled then that private employers could claim religious objections to paying for such insurance under the Affordable Care Act. But it stipulated that the Obama administration had to provide workers with access to such coverage, so it had state medical groups or insurers cover the cost. (Workers World, June 2014)

The second case, Zubik v. Burwell, heard in 2016, was a “religious-freedom challenge” to the birth control mandate by a group of religious nonprofits led by Little Sisters of the Poor Saints Peter and Paul Home. Similar to the Hobby Lobby accommodation, nonprofits were to notify insurers of their objection, and the state or insurer would cover the cost. (Workers World, June 2016)

But the Little Sisters and others claimed that due to the Religious Freedom Restoration Act such a provision placed a “substantial burden” on them for merely having to register their objection. Rather than issue a ruling, the Supreme Court threw the case back to appeal courts, where it lingered until now.

Determined to fulfill a misogynist campaign promise, the Trump administration changed the HRSA wording in 2017 so that any business, university or religious nonprofit could opt out of paying for birth control for employees or students by  signing a waiver objecting to contraception on religious or moral grounds. By adding “moral” grounds, the immoral bigot-in-chief invited all employers to cash in on the ill-defined windfall. It was immediately opposed by Pennsylvania and New Jersey, while Little Sisters et al. filed in favor of it.

Justice Clarence Thomas wrote the majority 7-2 opinion. (Justices Elena Kagan and Stephen Breyer joined the five conservatives in order to request an in-depth review of HRSA and RFRA mandates by the appeals court.) The opinion asserted that both mandates authorized Trump’s expansion of permissible exemptions. Furthermore, Thomas asserted that “It is Congress” in its wording of the Affordable Care Act, that has “failed to provide the protection for contraceptive coverage.” (Intercept, July 9)

Justice Samuel Alito took that reasoning a step further, posing: “If Congress thought that there was compelling need to make free contraceptives available for all women, why did it make no provision for women who do not receive a paycheck?” (Slate, July 8)

For the two dissenters, the Intercept quoted Justice Ruth Bader Ginsburg, who was joined by Justice Sonia Sotomayor: “In accommodating claims of religious freedom, this court has [in the past] taken a balanced approach, one that does not allow the religious beliefs of some to overwhelm the rights and interests of others who do not share those beliefs. … Today, for the first time, the court casts totally aside countervailing rights and interests in its zeal to secure religious rights to the nth degree.”

The Religious Coalition for Reproductive Choice condemned the court’s decision: “Using the cover of ‘religious freedom,’ this ruling makes bad economic and health care situations even worse. … This agenda has, for decades, targeted reproductive healthcare as one of many strategies to inflict control on Black, Indigenous and other people of color … to uphold white supremacist, Christian nationalist, classist, and patriarchal systems of oppression.”

“The vast majority of the 70 million Catholics in the United States long ago rejected the Catholic bishops’ authority,” wrote Catholics for Choice in a stinging reply to the court’s ruling. “Attacks on the birth control benefit jeopardize people’s health and safety, particularly the most vulnerable in our society, people of color, young women, those in rural areas and those with lower-incomes.

“Let’s be clear — real religious freedom must mean ensuring freedom of religion and freedom from religion.”

Countering the attack on health care

Citing government statistics, Ginsburg was quoted by the Intercept as writing: “Between 70,500 and 126,400 women would immediately lose access to no-cost contraceptive services. … This court leaves women workers to fend for themselves, to seek contraceptive coverage from sources other than their employer’s insurer, and absent another available source of funding, to pay for contraceptive services out of their own pockets.”

The RCRC noted that in one year, 2013, the ACA helped people save over $1 billion in out-of-pocket costs for birth control pills.

According to the National Women’s Law Center, the ruling jeopardizes access of 61.4 million women to no-cost birth control under the ACA. The NWLC asserts that birth control is also important as essential medication needed to address a variety of women’s health issues.

The Intercept also reported that four members of the Congressional Caucus for Women’s Issues responded to the attack on free birth control by announcing they would immediately file legislation to block the Trump exemptions from taking effect. In a joint statement Reps. Diana DeGettle, Judy Chu, Barbara Lee and Lois Frankel stated: “A decision about whether to use birth control is one that should be between a patient and their doctor. Giving an employer the ability to interject themselves in that decision — by limiting a patient’s access to free birth control — is unconscionable.”