July 13 — The Trump administration has ignored facts, science and the advice of experts when issuing an order for schools to open countrywide.  Pediatricians, teachers and other education workers who are on the front lines have said they want to reopen schools, but only under safe conditions. They say that Trump and Education Secretary Betsy DeVos place children, their families and educators’ health and lives in danger. 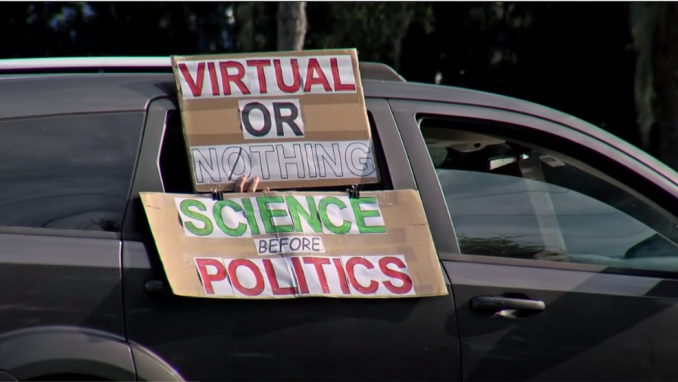 Trump’s July 8 tweet demanded schools reopen or they will lose federal funds. This tweet parrots the capitalist ruling class’s orders to restart the economy. Only workers at work can produce the surplus value (profits) that the bosses rob from them in the normal process of capitalism.

Some 27 million U.S. workers depend on schools to provide the child care they need to free them to work for the bosses. No other organized child care is available. Trump’s demand the schools reopen shows he wants this economic recovery to start before the November election, whatever the long-term risk for killing thousands of educators, parents and children.

Trump’s position reflects his usual priorities — winning the November presidential election while satisfying the U.S. ruling class. Regarding schools in this case, he fears that if the economy continues to stall, he will lose. For Trump, losing is the first step to the bottom of the cesspool.

Some 85% of teachers who responded to union surveys in both the Chicago and Los Angeles school districts expressed the view that they should not reopen schools without a well-thought-out plan to maximize safety. These unions are especially important because recent union struggles have sharpened their political activity and their contact with children and their caregivers.

“Our members have made it very clear that they are not willing to put the health — and the lives, quite frankly — of their students, or their students’ families, or their own in jeopardy under any circumstances, and especially now if the Trump administration is talking about using them as guinea pigs to help jumpstart the economy,” said Chicago Teachers President Jesse Sharkey.  (ctulocal1.org, July 9)

Because capitalist society uses public schools for more than educating the next generation of workers, however, the choice of whether and how to open them involves the needs of a broad section of the working class. Unraveling this issue reveals how capitalist society functions, with the COVID-19 pandemic shining a spotlight on the cracks.

It should be kept in mind that the education system, like the rest of capitalist society, operates in an unequal way based on class and income and reflects the special oppression of people of color and other oppressed sectors — those facing racism, sexism, homophobia, transphobia and ableism.

Besides educating youth and providing child care for 27 million workers, schools feed tens of millions of children who would otherwise face nutritional insecurity. Even before the pandemic, schools provided one free or subsidized meal a day for 30 million children and a second meal for nearly 15 million children. With tens of millions of people losing their jobs in the past four months, the number needing and eligible for meals can only have grown.

Schools also provide organized recreation, a place to make friends, some minimal public health care in a country where that service is almost nonexistent, and mentoring when funds and personnel are available.

Trump failed to mention that these are among the few capitalist countries where the daily number of new infections has declined and remains low enough to allow existing public health organizations to test regularly and do contact tracing. These countries, within the limitations of capitalist societies, have some form of universal health care and a public health apparatus, unlike in the U.S.

It is at least possible that these countries may contain any new outbreaks until medical protocols for minimizing the impact of the virus and/or vaccines are developed, though much about this disease/syndrome is still unknown.

In the U.S., where the national capitalist leadership is #1 in incompetence, bad will and anti-scientific ideology, infections are increasing rapidly, tests are inadequate, and school reopening is especially dangerous.

On July 10, the AAP walked back its position, joining the American Federation of Teachers, the National Education Association and the School Superintendents Association to issue a statement attacking Trump’s threat to withhold funds.

The statement read: “Local school leaders, public health experts, educators and parents must be at the center of decisions about how and when to reopen schools. … Reopening schools in a way that maximizes safety, learning, and the well-being of children, teachers, and staff will clearly require substantial new investments in our schools and campuses.” It demanded Congress provide the needed funds. (tinyurl.com/yd7uazbn)

The ruling class in general is pressuring worker-parents to get back to the job whether or not they have care for their children. They may be living on no income and savings that are evaporating — in a capitalist society that has no organized child care system aside from the public schools. The parents’ situation will grow even more dire if they are dependent on unemployment insurance, as the additional $600 supplement ends July 31.

And if they keep children at home — assuming they aren’t evicted — they have to worry about how to feed them.

When schools shut down in March, for example, in New York City’s gigantic system, educators cobbled together a distance-learning program teaching through the internet. Though it had obvious failures in equal access, that it functioned at all without extensive prior planning demonstrated the dedication of the educational staff.

At a minimum, however, the government will have to provide adequate access to those communities where inadequate internet broadband and access to devices made this type of learning difficult, if not impossible. These were often the same communities where the children’s caregivers were “essential workers” and thus unable to homeschool children.

With food and housing insecurity on one side and the threat of severe illness or death on the other, the coronavirus has turned its magnifying lens on the contradictions of capitalism. Yet the teachers, students and their families are on the same class side of this issue.

Ideally, a coalition representing all school employees, bus drivers, the students and their working-class families, along with public health experts and representatives of children with learning or other disabilities or any needing special services would together make decisions and execute them. A recent Workers World article by Makasi Motema describes such a popular organization.  (www.workers.org/2020/07/49903/)

U.S. capitalist society has the responsibility to provide adequate food, housing and education for all its population, including children with special needs. If the federal government can find $2 trillion to $3 trillion to bail out the capitalist economy, it can find the $200 billion to $500 billion needed to run safe, spacious and well-staffed schools — in person and/or at a distance during a pandemic.

If capitalist society is unable to do this, then it should step aside to allow organizations such as those representing teachers and other school workers and working-class parents to run a new kind of society, a socialist society, where production is organized to serve people’s needs, not to concentrate wealth in a handful of capitalists.