Some big companies with major operations in France have been using the impact of COVIC-19 on their business as an excuse to lay off thousands of workers, even though they have received major subsidies to maintain payrolls. 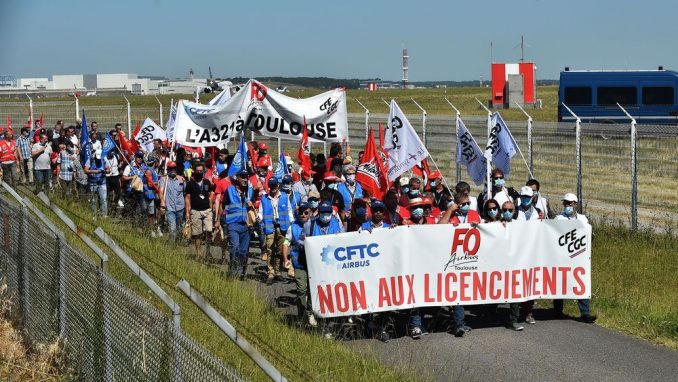 On July 8, the three unions representing workers at the Airbus facility near Toulouse — France’s Silicon Valley — called for a march from the Airbus facility to the local airport and back. An estimated 6,000 to 9,000 workers showed up for the march to the airport, where they occupied a runway, forcing some flights to divert.  Airbus is a pan-European company and the main competitor of Boeing in the multibillion-dollar aeronautics market. It is planning to lay off 5,000 workers in France by the middle of 2021.

The layoffs at Airbus will have a ripple effect on the whole economy in the region.  Workers at subcontractors, such as parts suppliers as well as service companies, will be devastated. Airbus order sheets are filled for the next 10 years, but 40% of the airlines, which are its direct customers, have postponed taking delivery of new planes. (FranceTVinfo, July 13)

The Finnish company Nokia, which supplies much of the telecommunications equipment in the European Union, has a major operation in France. It is threatening to lay off thousands of its employees. In response, the unions representing workers at a research center in the French region of Brittany leased a train to Paris, filled it and marched to the sound of bagpipes from the Paris train station to the Invalides, headquarters of France’s military. Many of the signs read, “Hired in March, let go in June.”

At the Invalides they listened to speeches from Fabien Roussel, national secretary of the French Communist Party, and Eric Coquerel, a deputy from another left party called La France Insoumise, as well as other political figures. Then they marched back through Paris to the train station, again to the sound of bagpipes.

A lot of union agitation is also happening at Sanofi, a major transnational pharmaceutical and vaccine company based in France.

Social tensions, exacerbated by public health measures required to combat the coronavirus plague, have led to increasing attacks on public service workers.  On July 5, in Bayonne, a small city in southwestern France, Philippe Monguillot, a bus driver who asked two passengers to put on masks now required on French mass transportation, was subject to a shockingly brutal attack.

The passengers grew so angry at this request that they pulled Monguillot off the bus, beat and kicked him in front of the other passengers and then fled before the cops came. He later died of his injuries.

On July 8, his family led a march of 6,000 people, dressed in white, from the bus stop where the attack had taken place to the police station investigating the crime. Bayonne is a city of 50,000 people. Buses in many French cities, including Bordeaux, Rennes, Nantes, Strasbourg and Mulhouse, stopped for a minute of silence when the march took off.

The minister of the interior, who is in charge of all the cops in France, and the minister of transportation came to a workers’ meeting at the bus yard where Monguillot worked and pledged justice would be done.

One of Monguillot’s colleagues, with tears in his eyes, told a FranceTV2 reporter that the driver “was a tiger in opposing injustice.” The workers are demanding the state provide more security to prevent future attacks.

France is not the only country where public service workers who request that people wear masks are being attacked. On July 5, in Brooklyn, N.Y.,  bus driver Anthony Reid, who is Black, was assaulted and suffered an eye injury after he asked a passenger to put on a mask.