In a huge victory for the growing movement against racism and national oppression, members of the Kanawha County Board of Education of Charleston, W.Va., voted 5-0 on July 6 to change the name of what used to be known as “Stonewall Jackson Middle School.” 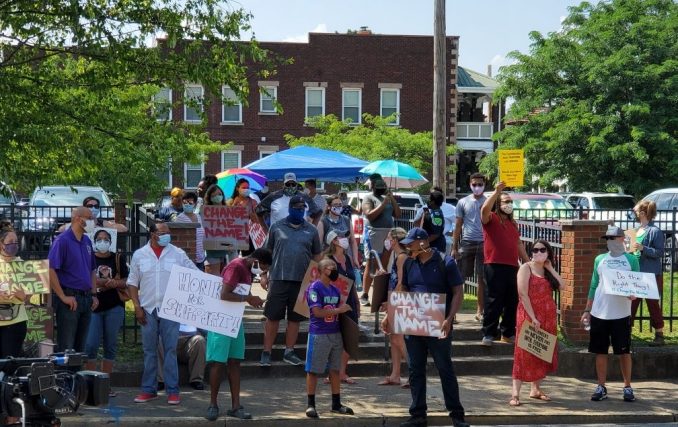 The junior high school has a Black student population of 44%, but it was shamefully named after a disgraced Confederate general, when it opened as a high school in 1940.

The struggle to remove the name started in early June, shortly after the lynching of George Floyd in Minneapolis.  Students and staff alike quickly organized and took action.  An online petition was created and circulated by students and community members.  Teachers at the school unanimously voted to change the name through their Faculty Senate, with support from the community.  Following the petition and Faculty Senate vote, people addressed their results to the Board of Education.

Students, teachers and community members started picketing the board office, even as the board was holding their meetings virtually, due to the pandemic.  In late June, students and community held a march from the Abundant Life Ministries building — a majority Black church that had been active in the struggle to change the name of the school — to the Kanawha County Board office, where it ended with several speakers.  On July 6, the board held a physically distanced, in-person meeting.  Several students gave passionate presentations to the board, as people picketed outside.

Progressive-minded people throughout the city and state celebrated on social media after the board voted to make the change.  Jay O’Neal, a history teacher at the school who helped organize his colleagues, enthusiastically expressed his thoughts to Workers World, “It’s been exciting to see everyone in the school and community, come together to make the name change happen.  I’m proud to have been part of that.” (July 6)

Many of the picketers proposed that the school be renamed after numerous African American heroes in history who are somehow historically connected to West Virginia.  One of the proposals is Katherine Johnson, a mathematician whose spirited story was portrayed in the 2016 movie, “Hidden Figures.” Johnson died earlier this year at the age of 101.

Another person who has been suggested is Carter G. Woodson, an important figure credited with founding what is now celebrated as Black History Month.  Woodson was an educator who taught throughout the state.

One of the people who attended the picket outside the board meeting told Workers World there were “several attempts to change the name before.” They added that  “this time was successful only because of the strong community support, in addition to the current, global rebellion against U.S. racism, led by Black, Brown and LGBTQ2S+ youth.”

The removal of the school name is also symbolic in that the Kanawha County Board of Education building was the battleground of the “textbook war” several decades ago.  In 1974, Kanawha County Board Member Alice Moore started a bigoted crusade against what she considered “forced multiculturalism” and “egalitarianism” after the English Language Arts Textbook Committee of Kanawha County recommended that 325 books be used in the school curriculum. Among the books were titles by George Jackson, Eldridge Cleaver, Alex Haley, Kate Millet and Allen Ginsberg.

Moore’s right-wing crusade was joined by white, evangelical zealots and the terrorist Ku Klux Klan. Meanwhile, progressive religious groups, unions and most of — but unfortunately not all — the self-proclaimed, local Marxist groups at the time supported the books.  Many of the white parents refused to send their children to school until the books were removed from the buildings and many backward coal miners also carried out “wildcat” strikes against the books.

The Black community of Charleston supported the books being introduced into the classrooms because the list contained several African American authors who may not have otherwise been read or studied in the schools.  It was also obvious that the attacks on the books were a direct attack on all oppressed people.  The Klan planted dynamite at one of the elementary schools, shot at school buses and threw stones through the windows of homes of parents who opposed the “book boycott.”  Fortunately, there are no recorded fatalities from those incidents.

Sadly, the textbook war is credited with giving birth to the arch reactionary Heritage Foundation, as well as inspiring white evangelicals to become active in national politics.  In some ways, the textbook war was similar to the struggle over  busing that happened in Boston in the early 1970s, where some progressive forces did not defend the aspirations of the Black community besieged by racists in South Boston.

As Workers World Party founder and chair Sam Marcy wrote regarding the struggle over busing in Boston in the pamphlet “Busing and Self-Determination,” “It is the oppressed people’s right to choose, and it is the obligation of Marxists in the oppressing nation to vigorously support and relentlessly defend that right.”

In contrast to what happened 46 years ago in Kanawha County, students, community members, workers and left activists united  — with very little opposition — to force the School Board to take considerate action on July 6.

Throughout the U.S. — as well as the world — nationally oppressed and gender-nonconforming youth are taking matters into their own hands by tearing down monuments and statues of oppression.  As Marxist-Leninists, it is our duty to unconditionally lend solidarity to the Black Lives Matter movement.  Every time a symbol or a name of an historic exploiter is removed from a public space, our class comes closer to creating a better world!