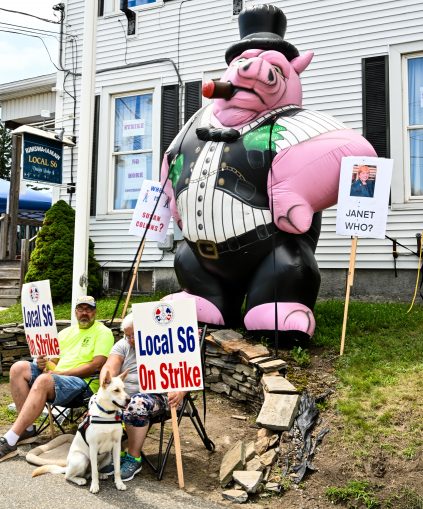 Over 4,300 production workers — represented by Machinists and Aerospace Workers (IAMAW) Local S6 — walked off the job at the Bath Iron Works shipyard June 23 after unsuccessful contract negotiations. Workers had made concessions in their last contract, but are reluctant to agree to attacks on seniority rights, increased health care costs and subcontracting which threatens current workers’ jobs.

Bath Iron Works is one of the U.S. Navy’s largest shipbuilders and a major employer in Maine, with a total of 6,800 workers. General Dynamics, the company that runs the BIW shipyard, raked in $3.34 billion in 2018, largely through contracts from the Navy. Now General Dynamics is trying to squeeze even more profits from the workers.

IAMAW International President Robert Martinez Jr., wrote in a letter to President Trump that the 2017 Tax Cuts and Jobs Act “reduced the company’s effective tax rate from 28.6 percent in 2017 down to 17.8 percent in 2018. With this windfall, General Dynamics greatly increased stock buybacks and dividend payments, giving nearly $2.9 billion to their stockholders in 2018 alone.”

After the company threatened to hire scabs to cross the picket line, the union released a quote from the poem “Ode to a Scab” by Jack London: “No man has a right to scab so long as there is a pool of water to drown his carcass in, or a rope long enough to hang his body with.”

Even though three union members have tested positive for the coronavirus, General Dynamics has cut off health insurance for the thousands of strikers and their families. Local 6S officials are asking that solidarity donations to their strike fund be sent to paypal.me/LocalLodgeS6.

The workers’ last strike in 2000 went 55 days before a new contract was won.