In the midst of a dangerous pandemic, the Black Organizing Project has won an unprecedented victory for the entire Oakland community. On June 24, the Oakland School Board voted unanimously to completely defund, dismantle and terminate their own Oakland School Police Department. This action came from a school district that up until a month ago refused to consider this possibility. The next day, BOP had a celebratory post-victory virtual press conference.

For 10 years, BOP has worked tirelessly to bring attention to the racist and unfair treatment faced by Black students in the Oakland Unified School District.

Jessica Black, BOP Organizing Director, gave some historical perspective when she spoke at a press conference before the June 24 vote. Speaking of their 10-year  campaign, Black said, “BOP had a dream that Black children could walk into schools and be valued as human beings. BOP had a dream that people would stand in solidarity with us. We have fought for that. We were too radical. We were the little Black group that has done extraordinary things.” 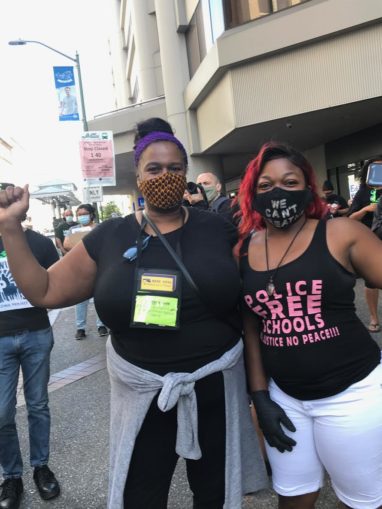 The beginning of the dream was won this past week. Leading up to the vote, BOP conducted an ambitious 10-day campaign of actions, including both virtual and in-person events. There were two marches in solidarity with Black and Brown youth led by BOP youth organizers in Oakland and a rally and car caravan by teachers and educators in front of the Oakland school district offices.

What the school board passed was called the George Floyd Resolution to Eliminate the Oakland School Police Department. It was a collaborative effort between BOP and District 5 Oakland School Director Rosie Torres. Torres has been the one board member who has consistently supported BOP in its campaign for police-free schools.

Black stated that it was the pandemic of racism and police murders that pushed BOP to fight harder for victory during COVID. She labeled policing in schools and the community a pandemic. She said, “Just because we are in a health pandemic does not mean that we will stop fighting to be seen as humans. We are faced with two pandemics in our community. During this time of COVID-19, we are still marching in these streets.”

BOP called upon allies in the community who came out in great numbers to support them. A rally dubbed “Educators for Black Sanctuary” on June 22 brought out hundreds of teachers, educators and school district workers who decorated the sidewalks in front of the school district building with demands for “police-free schools.”

Not only was the power of labor brought to bear, but the unity between the Oakland anti-racist community and the union representing the unarmed School Service Officers — who were part of the Oakland School Police Department — was firmly cemented. Their role will be renegotiated as part of the People’s Plan for  police-free schools.

Donneva Reid, Second Interim Vice President of SEIU Local 1021 in Oakland, spoke at the educators’ rally and later at the press conference before the vote supporting the George Floyd Resolution. She said, “We don’t want any more police. We want the funds to go to social services and building a better community and better education for our kids, and today we are here to support that.”

How did they win?

What brought about this tremendous victory? According to BOP organizers, a combination of factors made the difference.

At the June 25 victory press conference, BOP Executive Director Jackie Byers said the pressure brought to bear by BOP’s organizing was strategic: “Systems and institutions don’t self-correct. They are pushed by the organizations in the communities that demand these systems change. We saw school board members who were in opposition who moved over the last few months.” She noted that the school board members talked about the thousands of calls and emails they received from all over the country and even from Canada.

BOP Development and Communications Manager Jasmine Williams, who chaired the press conference, thanked all the allies in the community, including the teachers union. She said that BOP could not have won this victory without these community organizations and labor. Oakland Education Association President Keith Brown said that, given what is happening in this country with the police murder of George Floyd, it is more important that ever that teachers stand in solidarity with BOP’s vision.

Brown concluded, “We need to be honest that in the institution of education, many of our Black families have had negative experiences within our schools. As educators in Oakland, it is the time to acknowledge that … and examine our practices as educators.”

At an earlier press conference, BOP Organizing Director Black noted that similar campaigns around the country to defund or terminate police contracts were being won due to the strength of the national rebellion against police brutality and murder. Locally, the San Francisco Unified School District and the Peralta Community College District were forced to end their contracts with the police. In Portland, Ore., Mayor Ted Wheeler announced that “the entire school resource officer unit called the Youth Services Division — would be disbanded.” (Blogtown, Portland Mercury News, June 4)

Black, however, reminded everyone that Oakland’s victory is unique. “We want to effectively dismantle, completely dismantle, an entire school police department.” At the post-victory press conference, Black stated that this was only the beginning. “It’s very important that we have community at the table. …  While we are very excited to win the removal of the police department from OUSD, we are also  embracing this next level of struggle.”

The Black Organizing Project is bracing itself for a continuing struggle to keep the police out of the schools and to change the current climate and culture there. Desiree Mims, a BOP member leader, said it plainly: “This win is history, but we will not stop here. We owe it to Rahim Brown, who was murdered by Skyline School Police, we owe it to George Floyd whose untimely and unjust murder became the catalyst for the momentum we needed to go back up to the board again. This win is for our children. We ask that you keep the pressure on because this journey is only just beginning, and we will get free.”