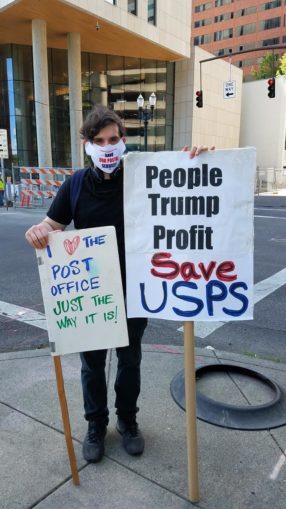 Demonstrators marched over the Hawthorn Bridge to the Waterfront Post Office, symbolizing the need to bridge the gap in federal funding needed to “Save Our Postal Service.”

The demonstration was organized by Community & Postal Workers United and included speakers from the American Postal Workers Union, the National Association of Letter Carriers, the Alliance of Retired Americans, Jobs with Justice, the Democratic Socialists of America, and the Oregon AFL-CIO, along with a post commander from the Veterans of Foreign Wars. Letters from the governor and the two U.S. Senators were read.

— Report and photo by Lyn Neeley