A new, historic phase in the struggle against white supremacy and capitalism has begun. Millions of workers and oppressed peoples have taken to the streets, the largest uprising against racist police terror and exploitation in decades. And yet there are still revolutionaries from the last major Black, Brown and Indigenous national liberation struggles of the 1960s and 70s who are still behind bars, like Leonard Peltier, Jalil Muntaqim, Dr. Mutulu Shakur, Ruchell Magee, Jamil Al-Amin and many more. 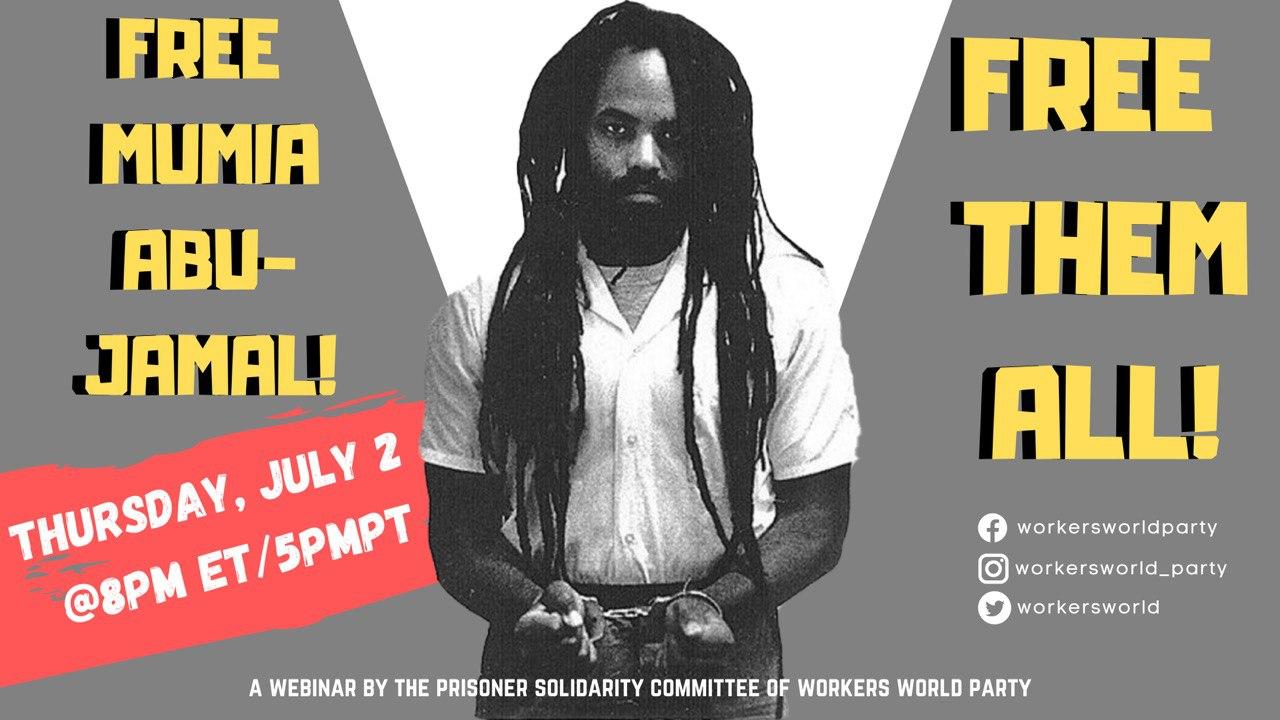 Mumia Abu-Jamal is one of those revolutionaries. Held in a Pennsylvania dungeon for nearly 40 years, Mumia is one of the most internationally renowned political prisoners in U.S. history. While still in his teens, he joined the Philadelphia chapter of the Black Panther Party. He distinguished himself as a savvy and fair-minded reporter and became the president of the Philadelphia Association of Black Journalists.

Abu-Jamal befriended and defended the stalwart revolutionaries of the MOVE Organization. For his reporting and activism, he drew the ire and contempt of the Fraternal Order of Police and arch-reactionary, cop-mayor Frank Rizzo, who publicly denounced Mumia and swore vengeance upon him. And in December of 1981, Mumia Abu-Jamal was shot by Philadelphia police and then framed for murder.

Within the story of Mumia Abu-Jamal’s frame-up are all the elements of the current struggle, decades later: police lies and police violence; a crooked and racist justice system that is structurally incapable of bringing killer cops to justice; and the mafia-like racket and dictatorship that police hold over political institutions.

Today’s hypermilitarized Philadelphia Police Department is the terrorist fantasy of Rizzo, police commissioner from 1968-71 and mayor until 1980, who boasted that his cops could “invade Cuba and win.” A line can be traced from the riotous tear-gas attacks on 52nd Street and the Vine Street Expressway earlier this month to the murderous assaults on the MOVE Organization in Powelton Village (1978) and on Osage Avenue (1985), to the dehumanizing arrests following police raids on various Black Panther offices. These are the forces that framed Mumia Abu-Jamal.

The uprising has brought about the long-overdue removal of Rizzo’s statue. But the Fraternal Order of Police and the capitalist state have been able to keep Mumia Abu-Jamal behind bars, despite an international campaign spanning decades that has saved Mumia from state execution and from murder by medical neglect.

As the Prisoner Solidarity Committee of Workers World Party wrote in a late-June statement, “There is only one way to end the police dictatorship in our cities. The prison gates must open, and Mumia Abu-Jamal — the most famous political prisoner in the world and a living symbol of the struggle against racist police repression and for the Black Liberation movement — must walk through to freedom. And it must happen now!”

“There can be no further real discussion in Philadelphia about reining in police racism until Mumia is free. If the system fails to do that, then the system is the enemy of those marching everywhere for justice.

“If that is not done, there is no way that this country can move forward from this moment toward a future without racist police terror.”

This is why we are holding a protest against police terror on July Fourth at 12 noon at the Philadelphia Municipal Service Building — where the Rizzo statue used to be. (tinyurl.com/y7gxlg8s)

Join us for a webinar Thursday, July 2 to hear from the dedicated organizers who need your help to win a major victory against the cops.  (tinyurl.com/yclbch6h)

Free Mumia! Free Them All! Abolish the Police!