Abolitionists are renewing their calls to abolish or at least defund campus police departments. This was first raised in Minneapolis, and now the demand is starting  in Austin and Dallas, Texas. Campus police departments are rarely less viciously racist than city police and have less predictable behavior, but they are often better funded. 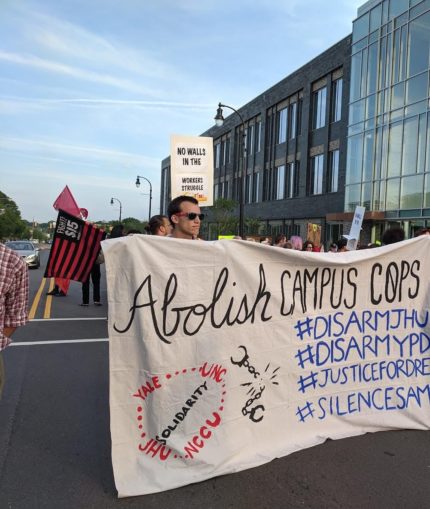 Campus cops have been in the spotlight in recent years. In Baltimore, site of some of the largest Black Lives Matter uprisings, student organizers staged a 35-day sit-in at Johns Hopkins University (#JHUsitin) opposing the formation of a private campus police force. It would operate as a de facto colonial force over neighborhoods surrounding the school and would coordinate with Immigration and Customs Enforcement to deport campus workers.

A Black queer student led the movement at the University of North Carolina- Chapel Hill to topple Confederate monuments and abolish the police. It won the removal of that monument, and the student government voted to bar cops on campus in the spring of 2019.

Wildcat strikers at the University of California-San Diego mobilized to defund campus police throughout the UC system, as officers from their own and other agencies collaborated to surveil and beat striking instructors. This was eerily similar to events a few months earlier at UNC-CH.

A coalition of community groups, including the Graduate Student Union, the Hyde Park Tenants Union and Good Kids Mad City have organized for years against the University of Chicago Police Department. This is a force so violent and racist it stands out, even in a city under the CPD’s punitive grasp.

Students and workers have both spearheaded struggles to free their campuses from police forces. Who can blame them? Police are dangerous enough on their own, but for campus workers, a private police force that reports directly to their bosses creates an additional layer of oppression, not unlike that experienced by city workers.

From the #StrikeDownSam action by instructors at UNC-CH to #COLA4ALL  strikers at UC-Santa Cruz, to the Graduate Student Union at the University of Chicago, which provides nearly all the instruction on campus, workers have exercised their power against these injustices. They have experienced political violence in return.

But workers continue to struggle alongside students and community members. Even in the most reactionary locales, such as Alamance County, N.C., workers are taking direct action against the police. This county has a great tradition of Black and multiracial, antiracist organizing. But it also has very strong, openly white-supremacist, repressive institutions.

Alamance County recently made national headlines for having the fastest growing coronavirus outbreak in the U.S. This was a few months after the county got major news coverage for being reinstated into ICE’s 287(g) deportation program. That came after the Justice Department had banned it from the ICE program in 2012 for being too openly racist even by federal government standards!

Elon University is one of the largest private employers in Alamance County and is the only one with its own police department. It is a predominantly white country club, whose board of trustees heavily overlaps with members of the Trump administration. Many of them own some of the country’s most exploitative businesses.

Just over a year ago, adjunct faculty members, whose labor the university exploits as its primary industry, voted by a large margin to unionize as Service Employees Southern Region Workers United Local 32 to protect themselves, their co-workers, students and the surrounding community. They wanted union protection for everyone exploited by the school.

On June 12, the international body of the Service Employees’ union called for defunding the campus police and for supporting all the demands in the platform of the Movement for Black Lives. Three days later, members of Local 32 pledged to redirect what they produce as workers — their research and educational capacities — to launch an abolitionist campaign targeting the campus, city and county law enforcement agencies.

This refocusing of the unionists’ work came a few days after the latest in a series of hate crimes directed against Black and Jewish community members was once again met with silence by self-styled “public safety” departments. Meanwhile, in the midst of the school’s shutdown caused by the viral pandemic, adjuncts were educating students directly without the university as the intermediary.

With classes suspended for the summer, and in-person classes likely suspended indefinitely, the union turned its work to answer renewed calls by Black feminist abolitionists to end the racist tradition of “AmeriKKKan” policing.

As at Elon, workers have mobilized around the country against campus police. This has been shown in sit-ins at police headquarters in Chicago and at demonstrations supporting urban uprisings in Baltimore and California.