Over a million workers on 60,000 ships, moving hither and yon through the world’s oceans, transport 80 percent of the world’s trade. Container ships carrying cell phones, computers and frozen meat; ore, oil and chemical transports — all the necessities of modern life — need crews to move them safely and expeditiously. 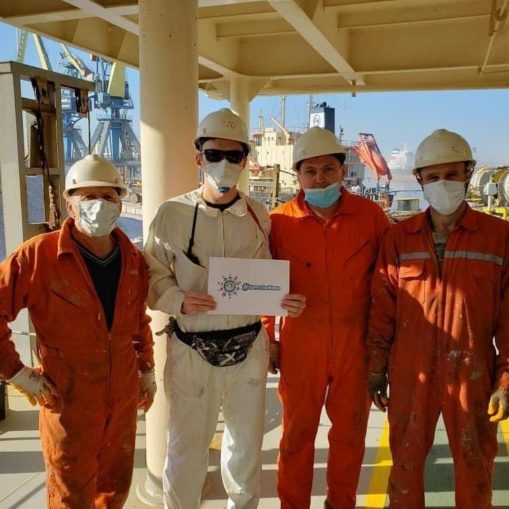 Unionized maritime workers hold a sign with the slogan ‘I supply the world.’  Credit: ITF Seafarers

Crews at all levels work on contracts that generally vary from two to 10 months.  Contracts can be extended by a month. After a worker’s contract is finished, they are guaranteed a free trip home by international agreement.

Monthly salaries range from $400 for trainees and $1,000 for junior seafarers to around $10,000 for captains. Some labor inspectors report that other companies pay as little as $250 for a month’s work and no overtime. Seafarers generally come from poor countries like the Philippines, India, Indonesia, Sri Lanka and also more developed countries like China, Ukraine and Russia.

The work can be very hard, demanding and dangerous. Le Monde interviewed a French seafarer who spent five months at sea, working seven days a week, on the ship’s machinery, in temperatures often over 110 F. He considered mutilating himself on the ship’s gear to get off the vessel. A friend talked him out of it. (June 19)

Countries and companies want their merchandise moved. The companies need to make profits. But while the merchandise can be unloaded, countries have their COVID-19 protocols in place, and will neither let the seafarers leave the boats or let other workers enter the country to take their place.

Both the secretary general of the United Nations and Pope Francis have issued statements about the “involuntary servitude” being imposed on seafarers.

The International Transport Workers’ Federation, a coalition of a wide variety of national maritime unions, has initiated an “Enough is Enough” campaign.

The ITF issued a June 21 statement saying that “when seafarers have finished their extended contracts, they are fatigued physically and/or mentally and feel that they are not fit to continue to safely perform their duties at the level required of a professional. The responsible action at this point is not to extend their contract and request repatriation.

“This is not an incitement to go on strike! Their contract has finished and, once a ship is safely in harbour, they have the right not to extend.”

The ITF is saying publicly that they will support a worker’s right to refuse an extension and stop working. If enough workers on a ship exercise this right, the ship will have to remain anchored, which is what would happen if the ITF did call a strike.