An earth-shattering rebellion against police violence and systemic racism just completed its fourth week, culminating with tens of thousands of protesters in the streets on Juneteenth (June 19) on a countrywide scale.

That is the historic day that the chains of enslaved people of African descent were finally broken from the wretched plantations in Texas in 1865, two and a half years after the Emancipation Proclamation was signed into law on Jan. 1, 1863.  While the struggle for total Black Liberation is far from being over, it has certainly taken center stage on a global scale like no other time since the 1960s.

This rebellion has already won important concessions from the powers that be and continues to sharply expose, on a class-wide basis, historical and present-day white supremacy in all forms. Police brutality is the immediate catalyst and most acute crisis, ignited by the public lynching of George Floyd by Minneapolis police on May 25.

Who would have thought it was conceivable that just a month ago corporate bosses like Nike, the NFL and other big corporations would be giving their workers a paid holiday on Juneteenth — which is not even a federal holiday? Juneteenth is a state holiday in 47 U.S. states, so could it become a federal holiday, sooner rather than later, due to the ever-changing political climate?

What is the impact of this rebellion on decades-long, embedded racist culture?  Since the U.S. government’s betrayal of the most revolutionary period for Black people — Radical Reconstruction in the 1860s and 70s — Black people have had to endure continued degrading, less-than-human treatment. This included demeaning representations in movies like “The Birth of a Nation” in 1915 and “Gone With the Wind” in 1939, along with generations of images on food products like Aunt Jemima Syrup and Pancake Mix, Uncle Ben’s Rice, Mrs. Butterworth’s Syrup and more.

Mega-companies such as PepsiCO and B&G Foods that promote these racist stereotypes recently announced that the images — derived from 19th century minstrel shows and 20th century Jim Crow segregation — will no longer be used.

But the question is: Why did it take a rebellion in the streets to force these cultural changes that should have been made decades ago?

Now, just as high school students around the country followed in the footsteps of former National Football League quarterback Colin Kaepernick in taking a knee to protest police brutality and systemic racism four years ago, many more are carrying out other forms of protests on a broader scale.

More and more Black student-athletes are speaking out against the ugly, racist remarks they have had to endure from their football coaches — including at football powerhouses Clemson, Iowa and Oklahoma State — and have pledged to take a knee when the sports season resumes.

The entire graduating class at Sam Houston High School in San Antonio, Texas, refused to stand when the national anthem was played. Liana Morales, an Afro-Latinx of Dominican descent, refused to sing the “Star-Spangled Banner” at her virtual high school graduation in New York City after the lynching of Floyd.  She explained, “With everything that’s happening, if I stand there and sing it, I’m being complicit to a system that has oppressed people of color.” (Wall Street Journal, June 22)  Instead she performed “Lift Ev’ry Voice and Sing,” widely recognized as the Black national anthem.

These two examples are just the tip of the iceberg of the various kinds of protests young people are taking against police violence and racism, in addition to their being out in the streets in vast numbers. 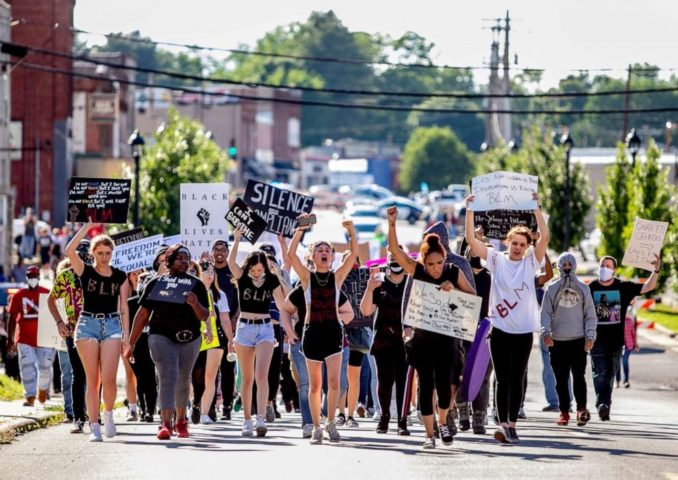 June 4 protest against police brutality in Anna, Ill., where African-American residents were forced to leave by racists almost a century ago.

Much of the spotlight has been on the large, historic protests against police brutality taking place in big cities like New York, Chicago, Los Angeles, Oakland, Denver and elsewhere — and rightfully so.

But protests in smaller, more isolated cities and towns, especially in the South, are just as politically significant, if not more so. Why?  Because many of these places have been strongholds for white supremacist, Ku Klux Klan and neo-Nazi views for decades — if not centuries.

In some places, for white protesters to bravely carry “Black Lives Matter” and “White silence = violence” placards has been nothing short of a revolutionary act as they show which side they are on. These unarmed protesters have gone face-to-face with armed, ultra-right militia — and they have refused to bow down to white supremacy.

Whether the protesters were ten or a couple of hundred in number, these anti-racist demonstrations are a psychological defeat for Trump’s racist worshippers everywhere. And this is happening as more and more police are becoming demoralized from the steadfast opposition and demands to “Defund, disarm, abolish!”

A tidal wave has erupted with the removal of pro-Confederacy and pro-colonial statues and symbols all over the country.  None of them are safe anymore from the wrath of this righteous uprising, whether the protesters deface them, pull them or burn them down on their own, or if they force city officials to remove them.  The same is true with Confederate flags, still embedded in some state flags or revered by reactionaries on college campuses like Ole Miss — but whose days are numbered. 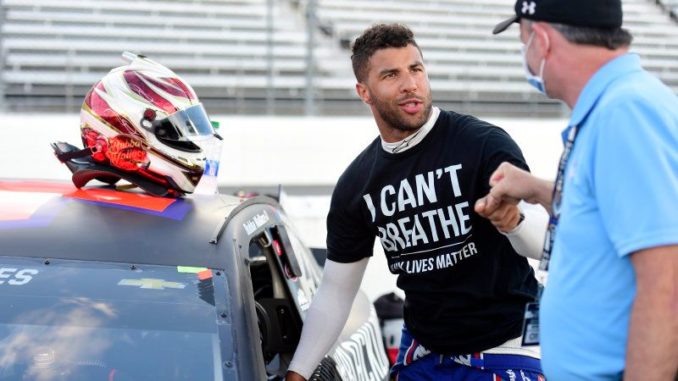 Probably the biggest story of all in dealing with the Confederate flag has been its removal from all events of the National Association for Stock Car Auto Racing. NASCAR is a 72-year-old institution that has flown Confederate flags officially and allowed its fans to bring the pro-slavery flag into the stands.

Bubba Wallace, the only full-time Black NASCAR driver, demanded that  NASCAR owners ban the flag from its races, which CEO Jim France Jr. agreed to.  Wallace proudly competes wearing his “I Can’t  Breathe” T-shirt and drives a car that displays the “#Black Lives Matter” slogan.

Now NASCAR officials have announced that a noose was found in the Wallace competitor’s stall on June 21, the first official racing day ever without Confederate flags at the Superspeedway in Talladega, Ala.  A noose historically promotes the lynching of Black people. Wallace described this as “a despicable act of racism and hatred [that] leaves me incredibly saddened and serves as a painful reminder of how much further we have to go as a society.” (Washington Post, June 22)

NASCAR has promised an official investigation, saying only someone who had security clearance could have carried out this cowardly act. Also on June 21 a “Defund NASCAR” plane with a Confederate flag attached to it was flown over the same race.

Wallace’s fellow white drivers and other well-known athletes have responded with #IStandwithBubba on Twitter and before the race, expressing their anti-racist solidarity with him against this hate crime.

The rebellion against racism will continue to raise this critical question in a crucial way: Which side are you on in the overall struggle? Not only against white supremacy, but also against a capitalist system founded on racist exploitation.