Led by oppressed youth, a working-class revolt has erupted, initially over the police lynching of George Floyd. It needs and deserves the unconditional solidarity of organized labor. Unfortunately, what top labor officials have delivered is something much less. 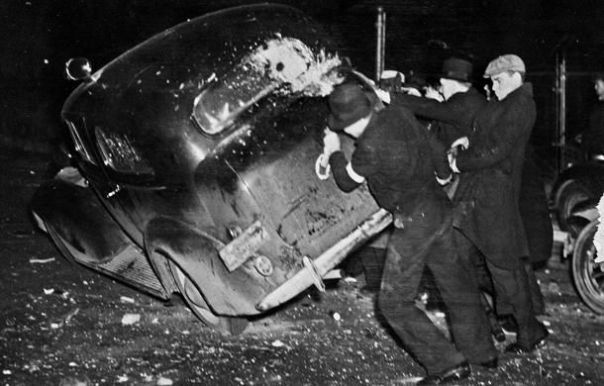 Consider a recent statement signed by New York City leaders of the Service Employees (SEIU), American Federation of State, County, Municipal Employees, United Auto Workers, Communication Workers (CWA), Professional Staff Congress and the New York State Nurses Association. Overall, the statement is laudable. But these generally progressive union leaders felt compelled to include a caveat that “we do not, and never will, condone violence against police nor property.” (seiu32bj.org)

By separating out “violent” protesters from others who are “peaceful,” these unionists have fallen into a trap set by the capitalist media to divide the movement.

They admit that the so-called violence has been directed only at police and property. Repeatedly, it has been the police who initiated violence with their attacks on antiracist demonstrators. But those who engaged in self-defense and inflicted damage on hated instruments of oppression — police buildings and vehicles — were the ones castigated as “violent.”

To fall for violence-baiting is to embark on a collision course with the long, militant history of organized labor. Since their inception in the late 18th century, U.S. unions have had to engage in class warfare — not always peaceful — with both the owners of private property and the police whose job is to defend it.

Anyone who has studied labor history is familiar with the famous Flint sit-down strike. For 44 days — Dec. 30, 1936, to Feb. 11, 1937 — General Motors workers occupied key company plants in Flint, Mich. They marched out of the plants triumphantly after GM agreed to recognize the United Auto Workers union.

Any illusions about police impartiality were shattered on Jan. 11, 1937. Until then the union’s Women’s Auxiliary had been able to deliver food to the strikers inside. But on that day, plant guards blocked the deliveries to GM’s Fisher Body Two plant. Flint police began to surround the building.

Supporters picketing outside then swarmed the gate, while strikers inside forced the gate open. Police retaliated by firing tear gas and vomit-inducing gas (from GM’s private stockpile) into the plant. A striker’s wife, Genora Johnson, took the microphone on the sound car and called on the women to charge through the police barricades — which they did.

The strikers inside turned on fire hoses and showered the cops with ice-cold water, along with a barrage of two-pound hinges. Outside, pickets overturned police cars. This became known as the “Battle of Bulls’ Run” because of how fast the police ran away.

Would today’s union leaders condemn this heroic action as “violence against police” or a crime against property?

Although the state suffered a defeat, police brutality continued against the union, not only in Flint but in Saginaw and Bay City. Police looked the other way while vigilantes terrorized union supporters in Anderson, Ind.

Donald Trump would have approved of the Indiana governor’s decision to declare martial law and ban public gatherings.

Police never a friend of labor

While the UAW’s battles with Flint’s police are well known, they were hardly unique.

In the 19th century police routinely attacked strikes. Unionists, falsely charged in killings of police, faced the gallows. The five Haymarket martyrs, now honored every year on May Day, were executed in 1887 for the death of a cop even though it was proved that they were not involved in it. The same fate befell 19 Pennsylvania mine union organizers between 1877 and 1879. The last two were hanged just minutes before a reprieve was issued by Pennsylvania’s governor.

Throughout labor history, one finds innumerable accounts of cops engaging in anti-union violence. Police viciously attacked unarmed pickets during the 1994 Staley strike in Decatur, Ill., as well as the 1995 Detroit newspaper strike, to name a few examples. They arrested and harassed UAW members during last year’s strike against GM.

These uniformed goons have been, and always will be, the enemy of the working class and oppressed. They will side with the bosses whenever we organize and strike.

It is time for organized labor to remember its history, break with phony police “unions” and defend the resistance in the streets.