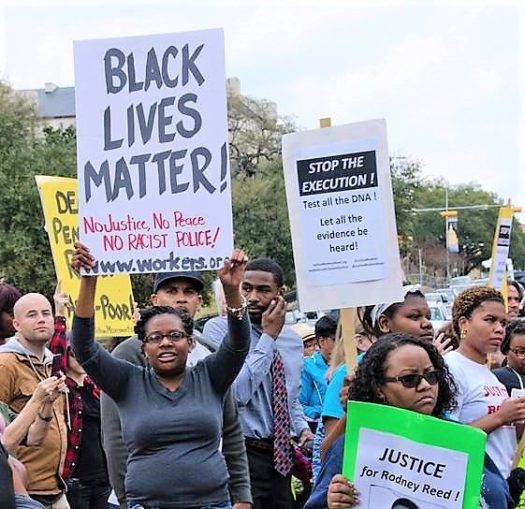 In 1998 Reed was wrongfully sent to prison to await execution after a Bastrop County jury used DNA evidence to convict him of the rape and murder of Stacey Stites. Reed is African American and Stites is white. Because they were having a consensual affair when she was found dead in 1996, Reed’s DNA was found in Stites’s body.

In a dramatic decision last Nov. 18, the Texas Court of Criminal Appeals, the highest criminal court in the state, indefinitely stayed Reed’s scheduled Nov. 20 execution. The CCA ordered the trial court to hear all the new evidence that has been discovered by Reed’s attorneys with the Innocent Project in New York City.

A full two weeks have been set aside for the hearing, which will be held Sept.  14-25 in the Bastrop trial court.

On the lawn of the Bastrop County Courthouse where Reed was wrongfully convicted, there are two monuments honoring the confederacy. They were both defaced in early June. An obelisk monument that the Daughters of the Confederacy erected in 1910 had BLM painted on all four sides and “Free Rodney Reed” on two. A headstone honoring Joseph D. Sayers, a major in the Confederate Army, who became Texas’s 22nd governor, was also christened with “BLM.”

According to Reed’s brother, Rodrick Reed, the Bastrop mayor called his family in to discuss the monuments before one of Reed’s previous execution dates on March 5, 2015. “No action was ever taken to take down the monuments and that was the last conversation we had with the mayor,” Reed’s brother told Workers World.

Reed’s case has received tremendous publicity, not only throughout Texas but from supporters countrywide. Television stars such as Oprah and Dr. Phil have covered the case. Super-stars Kim Kardashian West and Rihanna have called on the governor to intervene and asked the courts to hear new evidence.

In Reed’s original trial, the timeline of Stites’s kidnapping and death was incorrectly presented. At the September hearing, Rodrick Reed has said, “We will have nine world renown medical examiners who have done independent autopsies present evidence that will prove that there is no way that my brother could have committed this crime.

“Since all the publicity last fall and then the indefinite stay of execution, we now have hope. We are extremely optimistic. Everything is coming together, and as the whole world will be watching, evidence will prove Rodney’s innocence. This is the beginning of the end and we expect the court to either grant a new trial or let Rodney go.”