On May 30, after sleeping in after a long work shift, I decided to make my way down to City Hall for the protests planned in the wake of George Floyd’s murder. Making my way down to the parkway and to the art museum, I was astonished by the turnout. Tens of thousands of people from every political spectrum to the left of the GOP turned out to protest. It was one of the most amazing experiences I’ve ever seen. 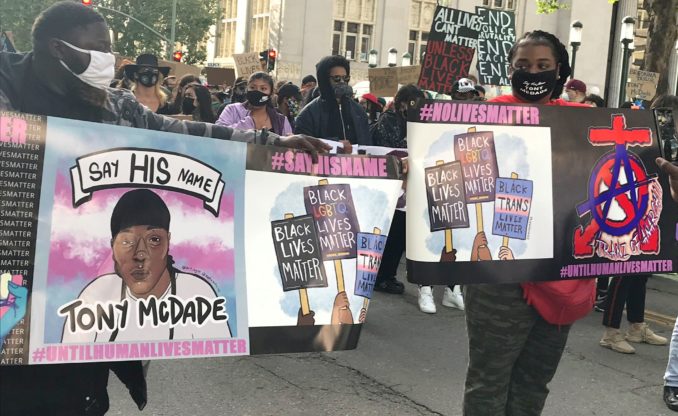 Protesters in Oakland on June 5.

For over two hours, protesters braved the heat, the escalating brutality of Philly’s  “finest” and COVID-19 to take a stand against the injustice that occurred in Minneapolis earlier in the week. I saw everything from tear gas being shot in the air to cop cars engulfed in flames.

While I was enthused and exhilarated by the powerful show of solidarity, as I took the bus home, there was something in me that was unsatisfied with the day, but I just couldn’t figure out what it was. At the time, I chalked it up to exhaustion and heat. After some hours of rest, I was able to recollect several images and sounds from the protest, and after a while, that disappointment turned to irritation.

First thing that got me stirred up was the seemingly performative nature of many of the people who came out to the protest. I expected there to be protesters from a variety of leftists tendencies, Marxists, Anarchists, even some Social Democrats. What I found eyebrow-raising was the amount of centrists who showed up.

Carrying meaningless signs such as “Vote blue no matter who” and “This is not America,” the liberals would prefer to individualize the tragedy in Minneapolis as indicative of Trump’s fascism rather that a symptom of a system which undergirds white supremacy and has harmed Black people for centuries.

Where were these “resistance” members when Ferguson happened? Where was this outrage when Eric Garner uttered the same words George Floyd did as he lay dying?  Where was this allyship when Colin Kapernick knelt to protest the same injustices they suddenly noticed?

Does it have to do with the fact that 2020 is an election year, and police brutality is a hot topic the blue team [Democratic National Committee] can exploit to elect Joe Biden, the author of the 1994 crime bill that laid the foundation for many of the horrific instances of police violence we see today?  If (or when) Biden gets elected into office, will many of these liberal protesters maintain the same interest in the injustices facing Black people?

Will they wake up and realize that the United States is an oppressive settler-colonial state founded on racism and genocide, and that it is impossible to reform an inherently violent system. I highly doubt it, but stranger things have happened (speaking from experience).

At the May 30 protests, I saw a sea of posters and signs demanding justice for George Floyd. While it is important to keep his name alive, it is also important to bear in mind that there are marginalized members within the Black community who are also victimized by police brutality. I only saw a smattering of posters with the hashtag #sayhername in remembrance in Breonna Taylor, victim of a brutal break-in carried out by the police.

To add insult to injury, some protesters appropriated the slogan that was meant to bring awareness to the lack of attention that Black female victims of police violence receive inside and outside the Black community. The hashtag #sayhisname appeared under drawings of George Floyd.

The Black Lives Matter movement was started by three queer Black women and to see the continued erasure of Black women from the movement didn’t sit well with me. Worse, I didn’t see anyone remember Tony McDade’s name, a Black trans man who was killed by police in Tallahassee, Fla., on May 27. That is further proof that transphobia is the only form of bigotry that is normalized. Black women and Black LGBTQ2S+ people have been the foundation of civil rights, feminism and LGBTQ2S+ liberation, and to see them tacked on as a footnote is an injustice that needs to change.

The concern for Black people and other people of color cannot end at the U.S. border. Protests against the war in Iran didn’t draw a fraction of the crowd that the George Floyd protests received. The Western-backed assassination of Libya’s Muammar Gaddafi was met with jubilance by some liberals; the coup against Eva Morales in Bolivia was met with callous indifference.

Venezuelan President Nicolás Maduro’s ongoing battle with U.S. puppet Juan Guaidó is met with arrogant paternalism. The U.S. imperialist hegemony’s role in the destabilization of socialist countries has endangered the lives of people of color all over the world.

Black people in African countries and elsewhere continue to suffer under the boot of neocolonialism, with Western countries exploiting Africa for its resources, enslaving children for literal pennies, and bombing and droning innocent families. What’s worse, so called “radicals” in the West continue to buy the lies and the propaganda Western capitalist governments manufacture in order to justify the horror they inflict on countries in the Global South. If Black Lives Matter then we have to care about Black lives all over the world.

The protests on May 30 are signs of progress. But for lasting change to truly happen, we must care about fighting racism and imperialism every minute and every second, and not just every four years. Also all Black lives have to matter, not just those of U.S. cishet [cisgender heterosexual] Black men. This might seem like nitpicking to some, but it is imperative to keep all this in mind to guarantee liberation for all Black people.