The Philadelphia Police Department, the fourth largest in the U.S., is one of the oldest municipal police agencies, founded in 1854. Its history has been marked by patterns of police brutality, intimidation, coercion and disregard for constitutional rights. 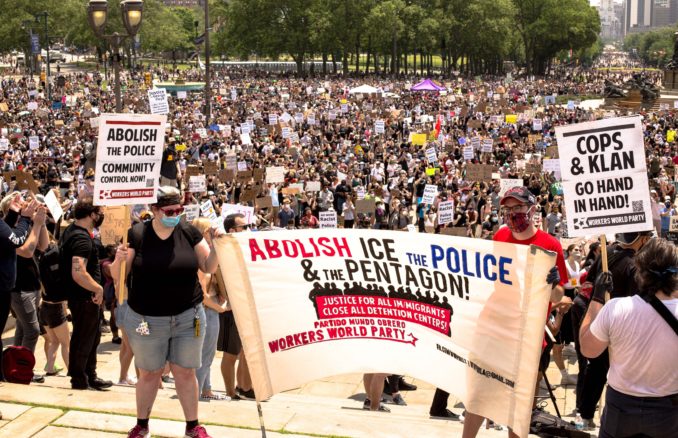 Recently, a statue of former Police Commissioner Frank Rizzo (1967-71), whose tenure is synonymous with racist police brutality, was finally removed. While welcomed, simply removing his statue changes nothing fundamental. It is only a first step.

Philadelphia Mayor James Kenney had ordered the removal of the hated statue in the middle of the night on June 3, robbing activists, who for years had fought for its removal, the pleasure of taking it down themselves. Back in 2017, Philadelphia REAL Justice had launched a campaign called “Rizzo Down.”

The removal came days after thousands of peaceful marchers filled the Benjamin Franklin Parkway protesting the police murder of George Floyd. They were violently attacked by local and state police using tear gas, pepper spray and rubber bullets. On June 10, it was reported that Kenney on May 31 had authorized the use of “less than lethal munitions” to respond to protests in the city.

During major protests in Center City on May 30, the most serious weapon used by police against protesters had been tear gas and limited pepper spray.  Yet the following day, in predominantly Black neighborhoods, police used tear gas, pepper spray and rubber bullets extensively against protesters and residents.

The Philadelphia Police Department has been the target of numerous investigations by the FBI and the U.S. Department of Justice. The U.S. Attorney’s Office in Philadelphia investigated Rizzo as far back as 1977.

A federal investigation conducted in the early 1980s resulted in the conviction of 31 Philadelphia police officers, including several involved in the arrest and conviction of Black journalist and political prisoner Mumia Abu-Jamal, who is still behind bars. The most recent DOJ investigation in 2015 ended with pages of recommendations and the appointment of yet another commission to carry out recommended reforms.

District Attorney Larry Krasner was elected as a reform candidate. In January 2018, shortly after taking office, he released a list of 29 cops whose names appeared on a “do not call” list for district attorneys to avoid calling as trial witnesses because their alleged misconduct made their testimony suspect.  Not one has been dismissed from the PPD.

In 2019, the Plain View Project outed more than 330 Philadelphia police for racist, homophobic and violent Facebook posts. The police commissioner at the time, Richard Ross, was due to dismiss several of these officers. Instead, it was Ross who was suddenly forced to resign under allegations of sexual misconduct. All police cited by the Plain View Project’s investigation remain on the force. Philadelphia officials then dismissed many of the allegations.

While the victims of police brutality in Philadelphia are too numerous to count, the number of police who were convicted as a result — and served any jail time — can be counted on the fingers of one hand.

In 1985, Philadelphia police, with the backing of then Mayor Wilson Goode,  dropped a bomb on the MOVE family house in West Philadelphia, murdering 11 men, women and children.  To date, not one of these cops or city officials have been held accountable for this racist crime — despite the fact that there is no statute of limitations on murder.

Fourteen City Council members sent Mayor Kenney a list of police “reform” demands on June 9.  They address long-standing problems, including disproportionate funding for police at the expense of vital community services and ending stop-and-frisk.  While proposing fully funded independent police oversight, they stopped short of calling for such a body to have the right to subpoena, fire or charge police.

Under community pressure, the city appears to be backing down on plans to build a $22 million police station in an historically Black neighborhood in North Philly. Yet despite the good intentions of some progressive council members, their reforms are just another attempt to save a police department that is beyond redemption.

The oppressed communities have moved on.

Twelve Black organizations and individuals released a platform of 13 demands on June 5 under the banner: We Want Freedom — End the War Against Black Philadelphians NOW!

The preface reads: “During this time of rebellion against police terrorism and state violence, we, the radical Black organizing community in Philadelphia, make the following immediately actionable demands upon the City of Philadelphia to abolish — by which we mean to permanently and holistically eliminate — the structures of policing and related state violence endangering our communities. Until our demands are met, we will be in the streets demanding justice for the Black community.”

Their demands include: no Police Department budget increase; no criminalization of Black resistance; immediate and permanent remove of all symbols of state violence; end military occupations of the Black community; end all carceral systems; immediate release of Mumia Abu-Jamal and all Black political prisoners; abolish the Fraternal Order of Police; disband all private police departments; and economic justice now.

The full list of demands and signers is available on Facebook at We Want Freedom for Black Philly.