These edited remarks were made at a June 11 webinar sponsored by Workers World Party:“Why we must abolish the police.”

What a historical, earth-shattering shift just three months has made! Who would have thought the main debate in the country and the world would be whether the police should be defunded, dismantled or even abolished, due to not one but two pandemics interconnecting with each other — resting on the ever-crumbling foundation of capitalism and its permanent crisis since 2008?

The COVID-19 pandemic, which accelerated in early March, kept millions of people indoors, wearing masks and social distancing, while killing over 100,000. Now there is a grim estimate that another 100,000 people in the U.S could perish before September. 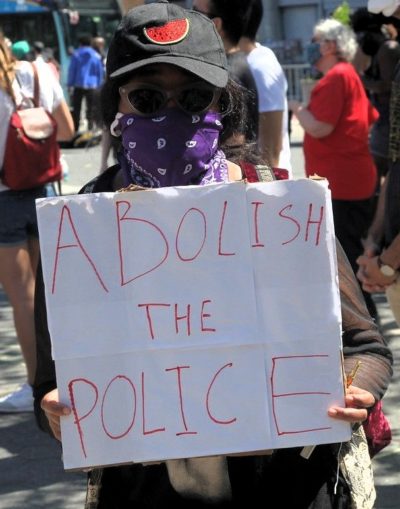 COVID exposed how capitalism was not able to meet people’s most basic needs like health care, income, food, housing and more. Billions of dollars in emergency bailouts went to the corporations at the expense of the suffering and pain of the masses, including Black and other oppressed peoples who are dying at alarming numbers, disproportionate to whites in their overall representation in the population.

And then, only weeks later, came another pandemic — another terrible outbreak of racism, the May 25 public torture and lynching of George Floyd by cops in Minneapolis, sparking a rebellion that still continues. The country was already sitting on a potential powder keg with the vigilante lynchings of Ahmaud Arbery in Brunswick, Ga.; Breonna Taylor, shot eight times while sleeping in Louisville, Ky.; Tony McDade, a Black trans man in Tallahassee, Fla., and more.

Floyd’s murder lit the fuse of the powder keg that exploded worldwide and uncovered the ongoing war that Black and other oppressed peoples have suffered from for decades — police terror.

The masses have been risking their health and the brutality of police to resist in the streets day and night — and say, “Enough is enough” about unpunished police lynchings.

‘A grassroots groundswell rebellion that goes beyond reforms’

What makes this rebellion so unique is its multinational character, led by angry young people, which is changing the political landscape forever on a global scale.  Every sector of society has been impacted with protests too numerous to mention.

However, this is more than a rebellion against police terror. It is also a rebellion against white supremacy. Look at the pro-slavery, pro-cop and pro-colonial monuments and statues that have been burnt, torn down, defaced or beheaded — monuments that glorified butchers from Christopher Columbus to Belgium’s King Leopold to Confederate Gen. Robert E. Lee and Philadelphia Mayor Frank Rizzo.

As someone whose roots are in the segregated South, this was so uplifting for me to see.

The 72-year-old NASCAR (National Association for Stock Car Auto Racing) — with deep roots in the white segregationist South — announced only yesterday a ban on Confederate flags at its events, unheard of three months ago.

When top Pentagon officials announced the possibility of removing Confederate generals’ names from 10 military bases, Trump denounced that. Not surprising since his base is composed of KKK members, neofascists and white supremacists — many of whom are cops or cop sympathizers, as we saw in Charlottesville, Va.,  in 2017. And Trump’s first campaign rally was to be held in Tulsa, Okla., site of a racist white vigilante massacre of hundreds of Black people 99 years ago. Four years ago it was the scene of the police murder of Terence Crutcher. The white police officer was never charged.

You know that the ruling class’s profits are threatened when they send out messages pledging to support “Black Lives Matter” — even the union-busting, trillion-dollar corporation Amazon! This ploy is all about trying to co-opt the mass movement.

Local, state and federal legislators are scrambling to come up with police bandaid “reforms” to try to quell the protests. But right now there is a grassroots groundswell that goes beyond reforms — reforms that will not fundamentally change the untenable relations between the police and the masses, especially communities of color.

Marx and Lenin analyzed how to abolish the police

From a Marxist perspective, the capitalist system depends on the police and Immigration and Customs Enforcement, as well as mass incarceration, the courts, prisons and biased laws, to maintain class dominance so billionaires can hold onto profits and to keep the masses powerless, defenseless and isolated.

Here’s a quote from V.I. Lenin’s “State and Revolution,” written over a century ago, that still resonates today: “According to Marx, the state is an organ of class rule, an organ for the oppression of one class by another.  The state is, therefore, by no means a power forced on society from without.  Rather, it is a product of society at a certain stage of development; it is the admission that this society has become entangled in an insoluble contradiction with itself, that it has split into irreconcilable antagonisms which it is powerless to dispel.

“But in order that these antagonisms, these classes with conflicting economic interests, might not consume themselves and society in fruitless struggle, it became necessary to have a power, seemingly standing above society, that would alleviate the conflict and keep it within the bounds of ‘order’; and this power, arisen out of society but placing itself above it, and alienating itself more and more from it, is the state.”

This speaks to what is going on today, because not only the police, but the military are armed to the teeth, to repress the rebellion of the people who threaten fragile capitalist peace and stability for Wall Street bosses and bankers.

This quote explains succinctly why we say, “Abolish the police!” This is not about good cops and bad cops. The police cannot be reformed because, historically, there can be no reconciliation between them and the masses. The police are an armed force created not to protect and serve the people but to protect and serve the private property of the rich.

But this task of abolition cannot be completely and ultimately achieved unless the economic system the police and state “protects and serves” is also abolished. You can’t carry out one abolition without the other.

Working-class power can change everything

Only the working class, the class that produces everything and owns nothing, can achieve this, with the guidance of a revolutionary program of united, organized revolutionary forces.  At this juncture, a majority of the masses may say “Defund the police” because they want some relief from the pain they witness and experience on a daily basis. But even if the rebellion wins this concession, defunding the police is just the first important step forward.

The direct intervention of the masses goes through various phases, with spontaneity being only one phase. Another phase may be some necessary assessment of next steps to move forward, in order to sustain momentum, until ultimately there is a national independent, revolutionary, developed program for real socialism — and not the social democracy that the Democrats hope to steer the masses toward with Biden as their 2020 candidate.

Workers World Party is ready to play a vanguard role in this struggle. First, in being with the masses in solidarity with their transitional demands for community control. And at the same time, in bringing a down-to-earth Marxist program that exposes the root causes of white supremacy, the role of state terror and also shows how the fight against capitalism will break down barriers and build the class unity to meet all basic human needs.

From everything we have seen over the past three months and before, the masses are ready for real social change. They are ready for revolutionary change which is monumental.  If those who are reading these words are also ready to make history, and you are looking for a revolutionary, socialist party that has been preparing for over 60 years for what we see today, please join our ranks with your ideas, energy and skills to make us stronger for our class, the movement and the struggle.