People poured through U.S. streets the first week of June, as if answering Martin Luther King Jr.’s cry: “Let justice roll down like waters and righteousness like a mighty stream.”

Those torrents of people are carrying out a mighty change through the U.S., and a prime example is pulling down the racist statues erected in the late 19th and early 20th centuries as propaganda for the “Lost Cause” of slavery. Outrage over the death of George Floyd has re-ignited determination to end the “honoring” of racism with physical symbols. 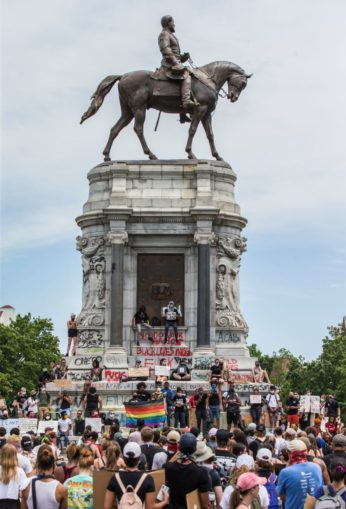 Around the U.S. — but most importantly in the South — monuments to white supremacy are falling under the weight of protests sparked by anger at George Floyd’s murder.

In Richmond, Va., the first capital of the Confederacy, protesters on May 31 surrounded and defaced the statue of Gen. Robert E. Lee, a rallying point for racists. The statue has sat since 1890 on affluent Monument Row where other Confederate leaders are also memorialized.

Unwilling to wait for Northam, protesters in Richmond used ropes on June 6 to topple the statue of another Confederate general in the heart of the Virginia Commonwealth University campus. 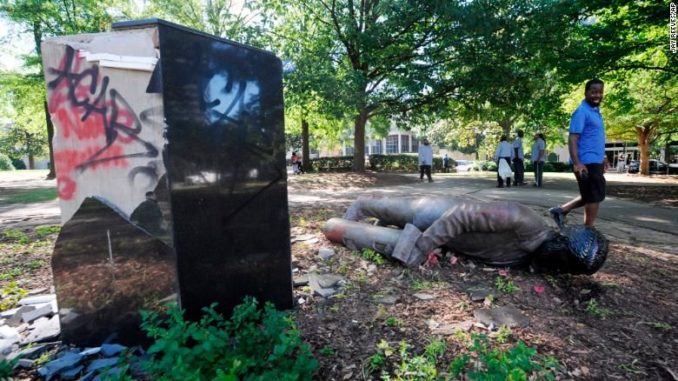 In Birmingham, Ala., on May 31, protesters pulled down the Confederate soldier statue from atop the Soldiers and Sailors Monument erected in 1905. The next morning a city-ordered crane began to haul away the memorial’s last remains.

In Montgomery, Ala., the last capital of the Confederacy, while other protesters gathered a few miles away on June 1, four people tore down a Lee statue erected in front of Robert E. Lee High School. On June 5, the city of Mobile, Ala., a port city, suddenly removed the statue of Confederate Admiral Rafael E. Semmes after days of protests about the death of George Floyd.

The mayor of Indianapolis, Ind., announced plans to remove a Confederate soldiers monument erected as a grave marker in 1912 and relocated in 1928 because public officials active in the Ku Klux Klan wanted it to be more visible. In the 1920s Indiana’s governor, more than half the state legislature and an estimated 30 percent of all “native-born” white men in Indiana were KKK members.

The campaign in the U.S. to bring down the physical emblems of slavery and racism intensified in 2017 after white supremacists and neo-Nazis violently rallied in Charlottesville, Va., on Aug. 11 and 12, killing one anti-racist protester and injuring scores. The racists’ pretext for invading the city was to protect a Lee statue.

A unified left force pushed the far-right back in Charlottesville, and two days later, on Aug. 14, a left coalition in Durham, N.C., with active leadership by Workers World Party, pulled down a Confederate statue outside the old Durham County Courthouse.

George Floyd was born in Fayetteville, N.C., and one of his sisters still lives in nearby Raeford, N.C., where his body was brought for a memorial. Raeford is a country town with a population of less than 5,000 people — but thousands more came there on June 6 to honor Floyd. When the hearse arrived bearing his coffin, chants began in the crowd, “Black Power!” and “No justice, no peace!”

On May 30, in Fayetteville, N.C., protesters encircled the Market House, a historic building at the center of downtown. From 1790 to 1865, enslaved Black people were sold at that site about every two months. Local protesters, well aware of this history, burned a U.S. flag at the building and then set fire to the Market House itself.

Pratt, a white, anti-racist activist born and raised in Alabama, organized for many years in Fayetteville, N.C.