June 7 — As the uprisings against police brutality throughout the last week have shown, Buffalo, N.Y.’s elected officials can no longer hold together the conflicts embedded within it.

During the first weekend of rebellion beginning May 30, riot police teargassed and shot rubber bullets at crowds, as over 1,000 people gathered across Buffalo. By midweek, they switched tactics. On Wednesday, June 3, police kneeled alongside protesters in Niagara Square. This gesture, under the guise of “solidarity,” barely veiled its real objective of trying to appease protesters into bending to their will. A short time later, the imposed 8 p.m. curfew came into effect. 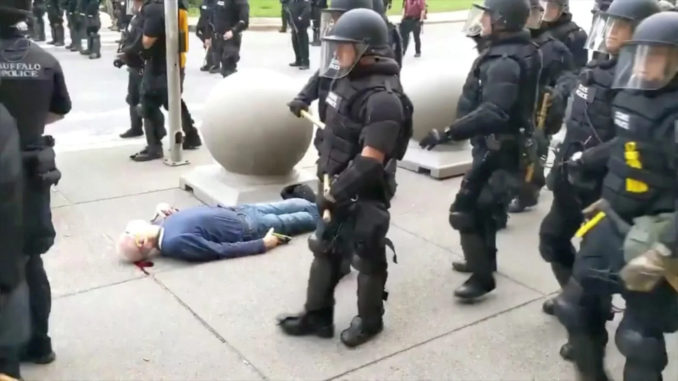 Still, demonstrations continued to grow in both size and strength. On June 4, after a handful of protesters were kettled and arrested downtown, demonstrators avoided arrest in an organized defiance of the curfew by marching into a nearby multinational community. However once the curfew hit, riot police took the streets with brute force. Caught in a now-viral video, police shoved 75-year-old Martin Gugino backward, causing his head to slam against the sidewalk.

Until the video emerged, the police department publicly stated, and media repeated, that Gugino had “tripped and fallen.”

This viral video circled the world, as people everywhere were horrified and condemned the brutality of cops, who they saw marching right past the unconscious protester. One of the officers who previously knelt on Wednesday, John Losi, prevented another officer from rendering Gugino any aid as he lay bleeding on the sidewalk. The farce of his previous solidarity gesture couldn’t be clearer.

The following day the demonstrations doubled in size. The city was forced, by the disgust and anger being expressed, to suspend and then bring charges against the two cops who assaulted Gugino. Gugino is not only a longtime activist, he went to Cuba with the 2018 Ché Brigade (Canada’s volunteer work brigade in solidarity with Cuba).

In support of those two police officers, all 57 active members of the riot police, the Emergency Response Team, resigned from that squad. And when the two cops appeared in court for their arraignment, many hundreds of Buffalo police completely filled the street outside in support of the two, showing exactly whom they intend to “protect and serve” going forward.

Buffalo is one of the most segregated cities in the U.S., with Main Street, which runs the length of the city, cutting it in half. About 85 percent of the city’s Black residents live on the East Side of this divide, often experiencing over policing and a blind eye from city officials.

These demonstrations have been multiracial and have bridged some of the gap between residents of Buffalo’s East and West sides — now standing in solidarity to demand defunding the police and an end to police violence. In the days following Gugino’s assault, huge, energetic spirited demonstrations continued to defy the curfew. There was a greatly lessened police presence.

Over 650,000 people signed a petition calling for firing the two officers. On Sunday afternoon, the Mayor withdrew the 8 p.m. curfew. The people of Buffalo showed that we never needed the police to keep us safe and that they are in fact the danger we face!