“When civility leads to death, revolting is the only logical reaction. The cries for peace will rain down, and when they do, they will land on deaf ears, because your violence has brought this resistance. We have the right to fight back! Rest in Power George Floyd.”  Colin Kaepernick on Twitter, May 28

The words and deeds of Colin Kaepernick, the Black former San Francisco 49ers quarterback, was both revered and ostracized when he publicly took a knee in a peaceful protest against police brutality and racism at the beginning of the 2016-17 National Football League season.  The protest happened just a few months after the brutal police killings of two Black men, Alton Sterling in Baton Rouge, La., and Philando Castile in St. Paul, Minn.  Both murders were captured on videotape.

Kaepernick’s action took place during the playing of the national anthem before every game.  It sparked national protests involving other players and supporters in all sports from grade school to professional.  Not since Muhammad Ali refused to fight in the Vietnam War in 1967 — and was denied the right to box for almost four years — has an athlete electrified a major sector of society, Kaepernick did by just taking a knee in solidarity with the Black Lives Matter movement.

Kaepernick’s action cost him his career when billionaire and multimillionaire NFL owners conspired to keep him out of the league, despite the fact that he let every team know that he still wanted to play ball.

Now, almost four years later — in light of the May 25 public lynching of George Floyd in Minneapolis by four police officers, who tortured and then asphyxiated him with a knee held to his throat for almost nine minutes — millions of protesters throughout the 50 states are ignoring social distancing during the  pandemic and are taking a knee in unity in the streets. They are demanding “Justice for George Floyd” and other victims of police terror.

Protesters include high-profile soccer players in Germany’s Bundesliga football or soccer league.  Four of those players faced sanctions from the German soccer federation for carrying out protests during play to demand justice for George Floyd, either by taking a knee or wearing black armbands. But the league was forced to back down.

The entire Liverpool soccer team took a knee around a circle.  The Premier League, part of the English football league system, stated that no player will be penalized for publicly demanding justice for George Floyd.

This current uprising against police terror has truly transcended every sector of U.S. society, regardless of nationality, generation, gender, gender expression and ability.  This is very true with sports.  Whenever a mass movement in the U.S. has taken center stage, athletes, especially African Americans, have made their voices heard on the issues of racism, war and other injustices.

African-American athletes are once again speaking out loudly and clearly against police brutality.  These are mainly young, talented men, women and gender nonconforming people who understand so well that they could be the next George Floyd, Philando Castile, Breonna Taylor, Tony McDade or any of the other people of color who have lost their lives due to deadly police violence.  Michael Bennett, Thabo Sefolosha and Sterling Brown were on the receiving end of police attacks in Las Vegas, New York City and Milwaukee, respectively, in the recent past. 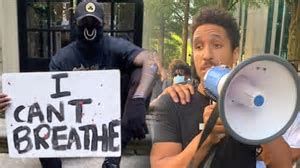 Jaylen Brown and Malcolm Brogdon on the mic at Atlanta protest.

Brogdon, who spoke at an Atlanta protest, refused to denounce “looters” in a CNN interview on June 3.  Instead, he paraphrased the words of the late prolific Black  author and activist James Baldwin:  “To be a Negro in this country and to be relatively conscious is to be in a rage almost all the time.”

Seth Towns, a former Ohio State basketball player, was detained at a Boston demonstration 24 hours after he received his “virtual” diploma from Harvard University.

Coco Gauff, the 16-year-old African-American U.S. tennis player, stated on youtube that what happened to George Floyd is not isolated and how when she was eight-year-old, she remembered the vigilante murder of Trayvon Martin in 2012 and subsequent police killings since then.

Thirty members of the National Basketball Coaches Association, whose composition is 90 percent white, recently formed the Racial Injustice and Reform Committee to help address racism in their NBA cities.  Their founding statement reads in part:  “Witnessing the murder of George Floyd in cold blood and in broad daylight has traumatized our nation, but the reality is that African Americans are targeted and victimized on a daily basis.

“As NBA coaches, we cannot treat this as an isolated incident of outrage. We are committed to working in our NBA cities with local leaders, officials and law enforcement agencies to create positive change in our communities. We have the power and platform to affect change, and we will use it.” (espn.com, May 31)

One of the most outspoken members of the NBCA is the legendary coach of the San Antonio Spurs, Gregg Popovich (Pop).  He, along with Golden State Warriors Coach Steve Kerr and former Detroit Pistons Coach Stan Van Gundy, all white, have taken strong, progressive stances against white supremacy.  This is especially so when it comes to the racist, misogynist Trump, who viciously attacked Kaepernick and referred to NFL players who took a knee in solidarity as “SOBs” in 2016.

Dave Zirin, The Nation’s left-wing sports columnist, received a late-night phone call from Pop after the police lynching of Floyd.  He told Zirin: “The thing that strikes me is that we all see this police violence and racism, and we’ve seen it all before, but nothing changes. That’s why these protests have been so explosive.  But without leadership and an understanding of what the problem is, there will never be change. And white Americans have avoided reckoning with this problem forever, because it’s been our privilege to be able to avoid it. That also has to change.”

Popovich went on to say:  “It’s so clear what needs to be done. We need a president to come out and say simply that black lives matter. Just say those three words. But he won’t, and he can’t.  The system has to change. I’ll do whatever I can do to help, because that’s what leaders do.” (thenation.com, June 1)

Prominent white athletes, like NFL players J.J. Watt and Tom Brady, have called for justice for Floyd.  Carson Wentz, Super Bowl champion and Philadelphia Eagles quarterback, posted a statement on Twitter that reads in part:  “Been thinking about the George Floyd situation and thinking of the words to say [and] coming up empty.  All I know is that the institutional racism in this country breaks my heart and needs to stop. Can’t even fathom what the black community has to endure on a daily basis.” (May 28)

Retired Major Baseball League player Dale Murphy issued a statement on Twitter after his son, Shawn, nearly lost an eye when he was injured by a rubber bullet shot by a Denver police officer on May 31:  “As terrible as this experience has been, we know that it’s practically nothing compared to the systemic racism and violence against Black life that he was protesting in the first place. Black communities across America have been terrorized for centuries by excessive police force.

Murphy continued: “If you’re a beneficiary of systemic racism, then you will not be able to dismantle it at no cost to yourself. You will have to put yourself at risk. It might not always result in being physically attacked, but it will require you to make yourself vulnerable.” (May 31)

The political tone of some statements and actions may be moderate, but in a society built on the foundation of white supremacy, many Black athletes and coaches have expressed appreciation for these white athletes and coaches for finally stepping out of the shadows to speak out against racism and police violence.  This is a big step forward in bridging the gap between sports and politics, inspired by one football player taking a knee for social justice. 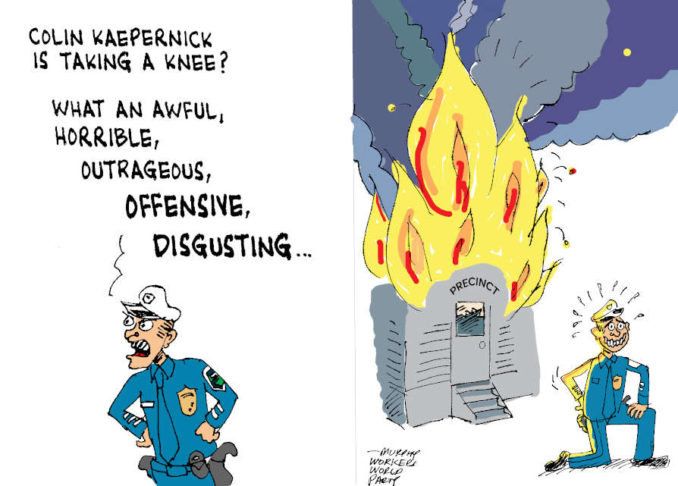