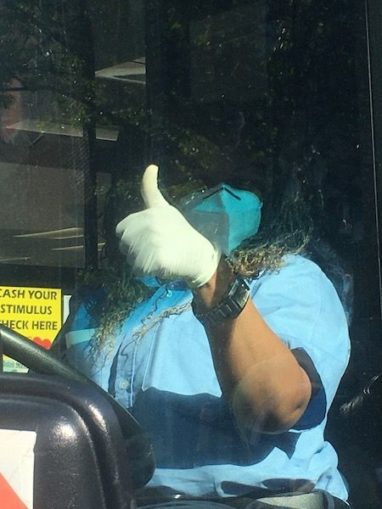 There has been a groundswell of worker solidarity with protests against the racist police killing of George Floyd in Minneapolis on May 25.

First, reports came in from Minneapolis that some bus drivers had refused to cooperate with cops in using public buses to transport people arrested during protests there. Bus driver Adam Bruch told Payday Report: “As a transit worker and union member, I refuse to transport my class and radical youth [to jail]. An injury to one is an injury to all. The police murdered George Floyd and the protest … is completely justified and should continue until their demands are met.” (May 30)

Soon the Minneapolis Transit Service canceled service completely. “Many [drivers are] unwilling to do anything for the police and put themselves in harm’s way for the police that created this mess to begin with,” added Burch.

Bus drivers in New York City, represented by Transport Workers Union Local 100 in the Amalgamated Transit Union, also did not cooperate with the police. A video of a bus driver refusing to transport people arrested during protests in front of Brooklyn’s Barclays Center went viral Friday night, May 26.

J.P. Patafio, vice president of Local 100, was quoted in VICE as saying:  “We didn’t do it during … Occupy Wall Street. … I told the Manhattan Transit Authority our workers won’t be used to drive cops around. That’s in solidarity with Minneapolis bus drivers. Our members do not work for the NYPD. We transport working families of NYC.” (May 29)

International President of the Amalgamated Transit Union John Costa issued a statement condemning Floyd’s death: “Our members — bus drivers — have the right to refuse work they consider dangerous or unsafe during the pandemic; so do Minneapolis bus drivers — our members — have the right to refuse the dangerous duty of transporting police to protests and arrested demonstrators away from these communities where many of these drivers live. This is a misuse of public transit.

“If any good is to come of this, we in the labor movement and the nation must unite to stop the systemic cycle of injustice, racism and hatred that plagues our country.” (May 28)

Statements condemning the murder of George Floyd and calling for justice were also issued by Richard Trumpka, president of the AFL-CIO; Mary Kaye Henry, president of the Service Employees (SEIU); and many national and local unions, including National Nurses United.

Some unions immediately responded to the racist outrage of Floyd’s murder by calling for all so-called law enforcement unions — city and county police, Immigration and Customs Enforcement, Customs and Border Protection, and Department of Corrections officers —  to be disaffiliated from the AFL-CIO, its state federations and all other unions.

“There can be no worker solidarity between survivors and perpetrators of police violence,” stated United Auto Workers Local 2322, representing student workers at the University of Massachusetts Amherst. For other union statements supporting disaffiliation, see #JusticeForGeorge Floyd on Facebook.

Jobs With Justice Executive Director Erica Smiley spoke out on May 29:

“While Jobs With Justice supports all workers who wish to form a union and have a voice on the job, the death of George Floyd at the hands of police is yet another example of a local police union that spends more time nurturing a culture of white supremacy and violence than democratizing the workplace. Police officers should not be above the law, and should not be able to negotiate conditions that put them above the law.”

A May 29 article in The New Republic, titled “No More Cop Unions,” states that if the AFL-CIO “wants to prove that it’s seriously committed to racial justice and true worker solidarity, the AFL-CIO must permanently disaffiliate from the International Union of Police Associations and sever its ties with any and all other police associations.”

Booker Hodges, a former Minnesota police officer who wrote a 2018 blog post on Police One, pointed out that over the years many union members have protested against police officers, criticized police unions for defending members’ abuse of power and called for no binding arbitration for police officers.

“If and when reforms are introduced in the wake of an abuse of police powers. … the bottom line here is all too plain: The police do not want reform; they want the freedom to operate with impunity,” asserted author Kim Kelly in the TNR article.

Citing the labor song “Which Side Are You On?” Kelly concluded: “As we once more … ask ourselves that question, the only acceptable response is crystal-clear: that we’re on the side of the workers, not their abusers and oppressors.”

Meanwhile, workers’ struggle against the coronavirus continues. The ATU issued a statement May 27 that over 100 TWU members have died of COVID-19, while more than 50 ATU members have died. While “states reopen, more people are boarding our buses and trains. Transit agencies and governments need to work with our Union to listen to what we learned since this outbreak began. Critical changes need to be made now to protect transit workers and riders, so more lives won’t be lost.”

ATU drivers in Connecticut held a rally May 20 in Bridgeport demanding improved safety, especially more masks and gloves. “We have people who are scared to go to work because they’re afraid of dying,” Veronica Chavers of ATU Local 443 in Stamford told WTNH. At least one Connecticut bus driver has already died.

The Washington Post ran a detailed article May 31 revealing that more than 100 workers in the $800 billion grocery industry have died from the pandemic. Food and Commercial Workers (UFCW) Local 400 is demanding their members have access to all benefits and protections of other essential workers, such as access to testing, treatment and personal protective equipment.

The unofficial tally of worker actions and strikes in Payday Report has grown to 230 since March 1, including a group of coffee baristas in Philadelphia and the fast-food workers who went on strike in Oakland, Calif., after they were asked to wear dog diapers as masks.

Primary sources are Payday Report, May 28-30, which led to other sources. Information from social media via Labor Against Racist Terror contributed to this article.