June 1 — A militant, youth-led uprising, ignited by police terror, has swept across the United States like wildfire, and is now entering its second week. Even Trump’s proudly declaring himself the “law-and-order” president by threatening the presence of federal troops in many cities — and the present catastrophic COVID-19 pandemic, resulting in over 102,000 U.S. deaths and rising — have not been able to contain this uprising sparked by a horrific videotaped police murder exposed on May 25 for the whole world to see.

For almost nine minutes, George Floyd, a 46-year-old Black man, was tortured and then lynched by Minneapolis police as he lay face-down and handcuffed in the street. One police officer pressed his knee to Floyd’s throat while two police officers pinned him down on his stomach. Before Floyd completely lost consciousness, he was yelling “I can’t breathe” and calling for his late mother. Floyd was initially detained after being accused of using a counterfeit $20 bill. 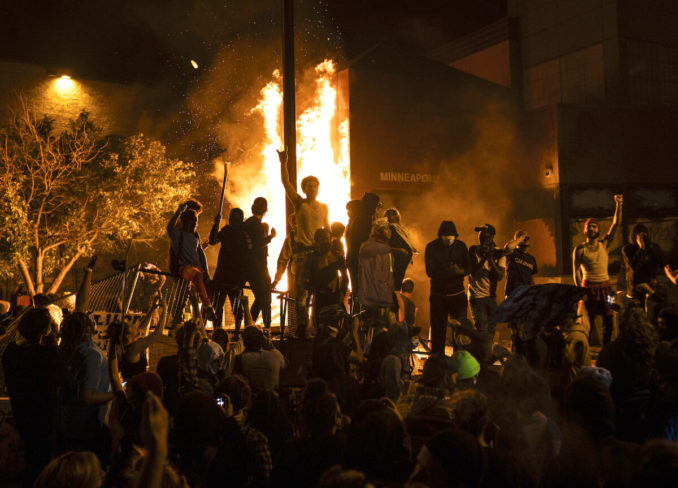 Protesters cheer as the Third Police Precinct burns behind them on May 28, 2020 in Minneapolis, Minnesota.

Even though the police officers — Derek Chauvin, Thomas Lane, J. Alexander Kueng and Tou Thao — were fired after the incident, none of them were immediately arrested and charged with Floyd’s death. It took four days after the lynching for John Harrington, commissioner of the Minnesota Department of Public Safety, to announce that Chauvin was arrested and charged with third-degree murder and second-degree manslaughter. The other officers still have not been arrested or charged.

An independent autopsy on June 1, paid for by the Floyd family, found that police were responsible for his death by “medical asphyxia” when he was deprived of oxygen to the brain for almost five minutes. He died at the scene, not at the hospital. This autopsy’s findings contradict the initial findings released by the Hennepin County medical examiner, which claimed that preexisting conditions caused Floyd’s death, not homicide by cops.

On May 26 protests began to erupt in Minneapolis and other cities demanding justice for Floyd and arrests of the officers. In an audacious act on May 28, youth torched the Minneapolis Police Department’s Third Precinct Headquarters, where the four officers had worked.

Dozens of curfews declared in many cities — backed up by the presence of local and state police and the National Guard — have not deterred young people from exercising their right to stay in the streets to let their outraged voices be heard, even if they had to take arrests for “civil disobedience,” if necessary. Thousands of people have been arrested for breaking curfew over six days of political outrage, expressed by burning cop cars and shutting down bridges and interstates.

Even reporters from mainstream media like CNN and MSNBC have either been detained or indiscriminately hit with rubber bullets and pepper spray, along with protesters. Isolated incidences of young people, including children, being tased, pepper-sprayed and knocked down by riot police were caught on videotape and shown on social media.

Young protesters have used guerrilla-like tactics to evade police, who are armed to the teeth with batons, rubber bullets, chemical irritants and even tanks. The youth have had only rocks, water bottles, bricks and even skateboards to defend themselves with.

Young people are fed up with not only what happened to Floyd, but with police killings of Philando Castile, Jamar Clark and other Black people in Minnesota.

In fact this uprising — which has spread to at least 130 large and small U.S. cities — has helped to expose the cases of other Black people who recently lost their lives to police violence. These include Breonna Taylor, the 26-year-old EMT worker who was shot eight times in her bed on March 13 by Louisville, Ky. police; Tony McDade, a trans man shot to death on May 27 in Tallahassee, Fla.; and David McAtee, a popular vendor fatally shot today, also by Louisville police — just to name a few.

The protests have linked these individual cases to all forms of police violence in Black and Brown communities, including disproportionate cases of harassment, arrests and shootings. Eighteen complaints had been filed against Chauvin for misconduct; only two were heard.

Systemic racism has also been a big focus of the protests. Protesters cited an incident when Christian Cooper, a Black man birdwatching in New York’s Central Park on May 25, was approached by Amy Cooper, a white woman. She called 911 to tell the police “ there’s an African-American man threatening my life,” which endangered him. And demonstrators raised the name of Ahmaud Arbery, an unarmed jogger who was shot to death on Feb. 23 by white supremacists near Brunswick, Ga. It took police two months to arrest them and the third person who recorded the video of the shooting.

White supremacist, pro-Confederate symbols have not escaped the wrath of the protesters, who have toppled or defamed Confederate monuments in Birmingham, Ala.; Nashville, Tenn.; Richmond, Va.; and Charleston, S.C. The United Daughters of the Confederacy Memorial Building in Richmond and the Market House, the site of a slave auction in Fayetteville, N.C., were torched.

Trump has been called the “number one white supremacist” — and rightfully so. His tweets have referred to the protesters with the racist connotation of “thugs.” He has stated that when the “looting” starts, the “shooting” starts. He has declared the “antifa” movement (aka anti-fascists) a “terrorist” organization, and he has called governors “jerks” if they don’t “dominate” and arrest protesters. By their very presence, the police incite violence, not the protesters.

Trump made a veiled threat to call out his neofascist base to confront the protesters before he backed off on that threat. Thousands of protesters confronted Secret Service agents and local police in Lafayette Park in Washington, D.C., across from the White House on June 1. For several nights firecrackers exploding were loud enough for those in the White House to hear.

There is no telling how long this uprising will last, whether it will be days or weeks or longer. There is one absolute: This rebellion is unprecedented for not only being composed of predominantly young people, but it is multinational with Black, Latinx, Indigenous, Asian and white protesters joining together. They refuse to be silent when it comes to being in solidarity with the Black Lives Matter movement and for condemning all forms of police violence.

This uprising, much like the pandemic, has impacted every sector of U.S. society.

Prominent amateur and professional sports figures have spoken out against racism, and in some cases, attended demonstrations along with entertainers.

Protesters have taken a knee in the streets in solidarity with former National Football League quarterback Colin Kaepernick, who first took a knee in 2016 in opposition to police brutality.

This uprising has also had a ripple effect around the globe, with solidarity actions in cities in Africa and the Middle East, Australia, Belgium, Brazil, Britain, Germany, Iran, Ireland, Italy, New Zealand and elsewhere.

Liberal bourgeois and reactionary politicians and their media mouthpieces are attempting to drive a wedge between participants in the uprising, labeling many Black protesters “peaceful” and many white protesters “anarchists.”

These apologists for the ruling class are fearful of how far and how deep this rebellion could go in rupturing the fragile capitalist system, already reeling from the coronavirus pandemic and the ongoing economic crisis.

This rebellion needs political solidarity, not isolation! That is reason enough to demand: No police state! No military dictatorship! Amnesty for all arrestees! Withdraw the police and National Guard! No justice! No peace!