On June 1, while taking photos at a Justice for George Floyd march in Philadelphia, Joe Piette, whose photographs appear frequently in the pages of Workers World was intentionally targeted by police.

This is one of many reports of journalists, including photographers and camera crews covering the George Floyd protests, being purposely targeted and injured by police, often with rubber bullets. 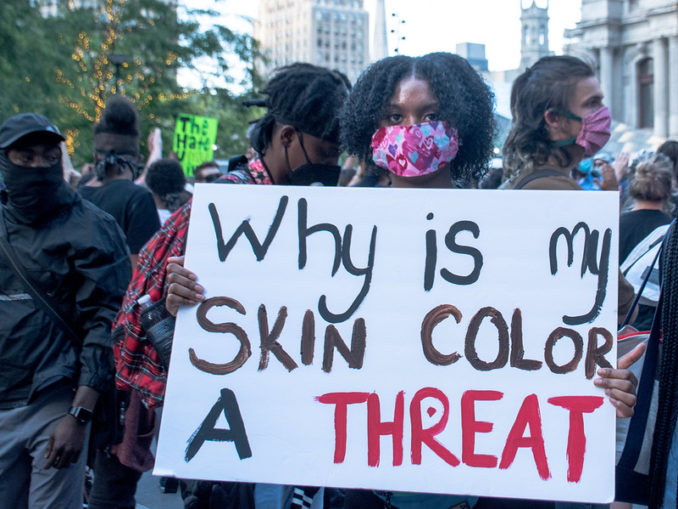 Photo taken by Joe Piette in Philadelphia May 30.

On June 1, Washington, D.C., police, attempting to clear peaceful protesters from in front of the White House, assaulted Australian journalists Amelia Brace and cameraman Tim Myers. On May 29, photojournalist Linda Tirado was left blind in one eye after being hit by a rubber bullet in Minneapolis. Journalists from CBS News, Reuters and MSNBC were also targeted with rubber bullets in Minneapolis.

Piette told Workers World:  “As cops were shooting tear gas and rubber bullets at nonviolent protesters, a cop shot a rubber bullet at me, destroying my camera and injuring my hand.

“As a retired U.S. Postal Service letter carrier, I’ve donated my photo skills to many progressive community organizations free of charge over the last decade. My photos of the June 1 protest, plus thousands of other photos of community events, can be viewed at tinyurl.com/yd9jqps8/.

“In these times of turmoil involving a pandemic, economic disaster and government repression, photographing the justified responses of people organizing against racism, poverty, police violence and incarceration has never been more important.

“I can’t afford to buy another camera so I asked all the people who have viewed and liked my work over the years to help me buy a replacement.  My gofundme goal was reached in just hours.  What I don’t need for the camera will be donated to the Philadelphia Bail Fund.”   (tinyurl.com/yd9jqps8/)