Union workers and community members organized a car caravan protest in front of Neuse Correctional Institute in Goldsboro, N.C., on May 12 to demand the freedom of all prisoners. This was in response to the fifth COVID-19 related death of a prisoner in state prisons the week prior. At Neuse itself, nearly 500 prisoners have tested positive for COVID-19 and three have died, making it one of the hardest hit prisons in the nation. 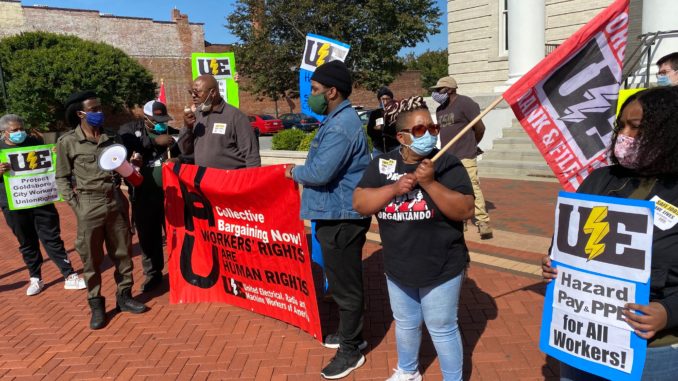 In a press release the North Carolina Public Service Workers Union, United Electrical Workers Local 150, stated: “The blatant denial of basic human rights by prison officials and their lack of response leaves inmates paying the ultimate price. Many were sentenced for nonviolent crimes, not a death penalty. Prisons and detention centers are not the answer to the challenges facing our society and pose a significant health risk to both incarcerated individuals and workers during this pandemic.”

Along with the union, this action was supported by the statewide N.C. United for Survival & Beyond Coalition and Pitt County Coalition Against Racism.

City workers have been raising their concerns with management and the city administration since late March. After not hearing sufficient response, workers took their concerns directly to City Manager Tim Salmon. After demonstrators crowded into the lobby of the city administration building and waited about 15 minutes, and after Salmon was prodded by Council Members Taj Pollack, Antonio Williams and Brandi Matthews, the city manager finally came downstairs to greet the crowd.

Looking disturbed, Salmon hastily took the letter, signed by employees and their allies. Bryce Carter, a city of Greensboro Streets Department worker and president of UE Local 150, and union Vice President Sekia Royall, a food service assistant at O’Berry Neuro-Medical Treatment Center in Goldsboro, attended the rally with other UE 150 members to back the city workers’ campaign for “Safe Jobs Save Lives” and support their right to unionize.

After receiving the letter, Salmon dismissed the crowd, telling them there was no appointment and attempted to dodge questions from the media. It was clear he had no substantial concern for city employees’ safety.

Sixteen workers in the Goldsboro PWD wore stickers reading, “Safe Jobs Save Lives” to work on April 7 and signed a letter, along with 30 community supporters, addressed to City Manager Salmon. To this date, there has been no official response — other than management attempting to intimidate city workers for exercising their constitutional rights.

Workers delivered a followup letter on April 21 to Public Works Director Rick Fletcher, outlining their concerns for safety and violations of their constitutional rights to freedom of association, including joining a union.

“Other essential businesses have provided PPE and hazardous pay. I would like the city of Goldsboro to take the lead on this matter,” stated Anya Dawson, Operator 4 in the PWD in front of the May 4 City Council meeting. “We come in contact with blood-born pathogens and leachate on a daily basis, along with animal and human feces. We inhale fumes and come in contact with things that could expose us to COVID-19. We deserve these basic protections.”

Essential city workers in many municipalities across the state have demanded and minimally received PPE and hazard pay. Municipal chapters of UE Local 150 in Charlotte, Durham, Raleigh and Greensboro have received that in addition to extra cleaning supplies, staggered shifts and smaller crew sizes to help with social distancing.

“As a state worker I understand the burden and privilege to be called an essential worker in this time,”stated Vice President Royall. “We are fully behind the city workers’ demands for more PPE and hazard pay.”

City of Goldsboro workers are continuing to build their organizing committee so they can fight and win the much deserved safety, rights, raises — and even save lives.