An earlier version of this article appeared in Labor Notes May 15.

The Trump administration, COVID-19 and U.S. Senate reluctance to provide needed funding have put the U.S. Postal Service in dire economic straits. To make matters worse, newly appointed Postmaster General Louis DeJoy comes with 35 years’ experience in labor analytics — the art of eliminating as many jobs as possible — and other antiworker practices. 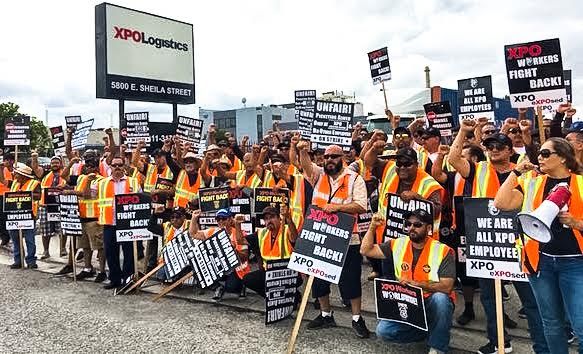 Workers striking in 2018 against XPO, the new postal head’s former company, with a long record of ‘anti-union animus.’

Criticism of the new postmaster has centered on his $2 million in contributions to the Trump campaign and other Republican causes since 2016 and his fundraising responsibilities for the 2020 Republican National Convention in Charlotte, N.C. His former company, New Breed Logistics, had a terrible labor record, rife with sexual harassment, discrimination, speedup, workplace injuries, excessive use of temps, misclassifying workers as independent contractors and inadequate sick leave during the current pandemic.

DeJoy, whose term begins June 15, is only the fifth postmaster general since 1971 to not come from within the U.S. Postal Service bureaucracy. His experience in supply chain logistics was clearly a factor in his appointment.

DeJoy’s New Breed Logistics, before it merged with XPO Logistics, was a contractor to the USPS for more than 25 years, “supplying the organization with logistics support for multiple processing facilities,” the USPS announcement revealed.

Currently XPO does extensive business with the Postal Service ($57 million in 2017), potentially putting DeJoy in the position of overseeing decisions that affect his personal financial interests. He served terms as XPO’s CEO and a board member before retiring in 2018. The company continues to rent warehouse space from him, and he and his wife own between $25 million and $50 million in XPO stock.

The funding that the postal board of governors is asking from Congress includes $25 billion for “modernization.” What might DeJoy’s version of modernization look like? Take a look at the website of XPO: “Our focus is on robotics, autonomous vehicles, automated sortation systems, drones and other cutting-edge technologies that speed goods through the supply chain. Once startup is complete, our managers use XPO Smart™ labor analytics to optimize productivity.”

In other words, the company specializes in the science of weeding out any worker who’s not superproductive and supercompliant, with no regard to seniority or a worker’s humanity. We can expect DeJoy to bring this same mentality to running the postal service.

Postal workers have experienced “modernization” before. Like in other industries, every wave of technological innovation since the 1980s has made work more difficult, while eliminating jobs, deskilling positions and increasing the number of lower-paid temporary workers.

Now during the pandemic, all postal workers are considered essential. All are exposed to COVID-19 dangers, but temp workers get much lower pay and benefits!

While DeJoy was CEO, New Breed acted with “anti-union animus,” the National Labor Relations Board ruled in 1994. That’s when New Breed avoided hiring Longshore and Warehouse Union (ILWU) members after securing a contract to run a U.S. Army terminal in Compton, Calif.

In 2008, DeJoy and Boeing provoked a 57-day strike of 27,000 Machinists (IAM), who fought back against plans to outsource 5,000 union jobs in parts delivery and facilities maintenance to nonunion New Breed Logistics. The longest strike in Boeing history ended with a compromise deal that prevented the loss of 5,000 jobs but allowed New Breed to deliver parts to Boeing factories.

In 2013, a Tennessee jury awarded $1.5 million to three New Breed temp warehouse workers in a sexual harassment and retaliation lawsuit. The workers had been fired for complaining about a manager’s “unwelcome sexual touching and lewd, obscene and vulgar sexual remarks.” The employee handbook, which had sexual harassment protocols, was purposefully kept out of the hands of temps — who made up 80 percent of the workforce.

In 2014, the New York Times reported, four women working for New Breed in a Memphis warehouse suffered miscarriages after supervisors refused their requests for light duty during their pregnancies. Workers hoped that conditions would improve when XPO took over, but instead things got even worse — workers were now expected to pack 120 boxes per hour instead of 60 and were punished for too-long bathroom breaks. In 2017, a woman died of cardiac arrest on the warehouse floor, and workers around her were told to keep working. In 2018, two more women miscarried.

Since 2000, XPO and its subsidiaries have racked up 16 wage-and-hour violations, with fines totaling $35 million. They have also been dinged six times for employment discrimination, five times for labor relations, eight times for aviation safety, and 22 times for health and safety violations. The state of California has repeatedly awarded back wages to XPO truck drivers who were misclassified as independent contractors.

Truck drivers, warehouse workers and intermodal drivers at hundreds of XPO facilities worldwide held a day of protests on May 30, 2019, against abuses and wage theft. U.S. efforts were coordinated by the Teamsters, who organized a handful of XPO units. “As someone who drives from Tijuana, Mexico to San Diego every single day to work more than 12 hours,” said driver Jose ‘Chema’ Rodriguez, “it’s ludicrous that I’m still unable to afford to live in the United States because of the compensation and benefits XPO has denied me by misclassifying me as an ‘independent contractor.’”

When the pandemic hit, the New York Times reported that XPO offered to “lend” workers up to 100 hours of time off — but they would have to repay the time. A Miami truck driver told the paper that even if he got coronavirus, he would have to keep driving his 18-wheeler. On April 4, workers walked out of an XPO warehouse in Palmyra, N.J., over COVID-19 concerns, after three workers became infected. (Video of walkout: tinyurl.com/yd2wefxk)

Already the pandemic has caused the deaths of more than 60 postal workers, and as of May 24, more than 97,000 people have died in the U.S., disproportionately people of color and the elderly. Over 17,000 postal workers have been sickened or have had to self-quarantine.

The pandemic has created a massive funding crisis for the postal service, but the struggle to save the postal service is taking place under a presidential administration that is openly hostile to its existence. The threat to postal jobs and benefits also comes at a time of historic unemployment, with more than 38 million unemployment claims since late March. Perhaps one-third of the U.S. workforce has become jobless; many may never get their jobs back.

The 38 percent turnover rate among noncareer employees at USPS in 2018-19 will likely decrease. Workers in these second-tier, permatemp positions (mail handler assistants, postal support employees, city carrier assistants and rural carrier associates) may be unwilling to quit — despite inflexible schedules, arrogant supervisors, the physical demands of the work and working too many or too few hours. People will be desperate to feed and house their families.

If workers can’t afford to walk away from the job, they might be more willing to fight for their rights on the job — much like workers during the great postal strike of 1970. The postal workforce at that time included many veterans newly returned from the Vietnam War, who came back angry — veterans were extremely against the war — and Black workers were inspired by the Black liberation movement. The rebellious spirit of the times led to defiant action within the post office. After the last few years of teacher strikes, Black Lives Matter protests and the #MeToo movement, it appears such a spirit is percolating again.

Piette began as a postal clerk, became a letter carrier and retired in 2011 after 30 years in the USPS.