May 9 — During March and April, U.S. and European media spewed out shocking images from Guayaquil, the biggest city in Ecuador and capital of the province of Guayas on the Pacific Coast. No one in the port city of 2.9 million is untouched by the death of a loved one, a friend, a co-worker or a neighbor. 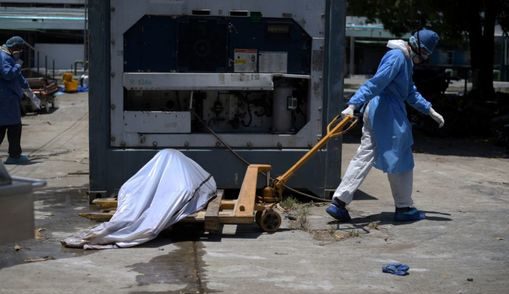 Health care worker transports a dead body outside of a hospital in Guayaquil, Ecuador, on April 3 during COVID-19 pandemic.

By mid-March, this financial center of Ecuador was collapsing under the weight of an exponential increase in the number of dead and dying citizens. Morgues and funeral parlors were filled to capacity.  Hospitals were turning away all who were sick, no matter their illness. Cadavers piling up in hospital corridors were thrown into containers. Bodies were cremated on street corners. Prisoners mutinied and began hunger strikes in several prisons.

What’s behind this crisis is that during the past three years, the neoliberal regime of President Lenín Moreno privatized the public health system and systematically dismantled it. The system follows the U.S. “just in time,” profit-before-people industry model. Privatization has drastically reduced the number of intensive care units, hospital beds per person and the system’s overall capacity to handle a crisis.

Both the movement led by former President Rafael Correa and the Indigenous-based organizations have criticized the Moreno regime for its mishandling of the COVID-19 crisis.

The New York Times falsely reported: “Ecuador took early aggressive measures to stop the coronavirus.” Yet a government update revealed that when the first COVID-19 case was confirmed on Feb. 29, there were already seven sick people in Guayas.

Following the soccer matches the first week of March, when thousands also packed the beaches, infected numbers rose rapidly into the hundreds, according to Primicias.

The virus had entered the country when many from Ecuador’s upper classes, who had been infected in Europe during business or vacation trips, returned to Guayaquil. The government failed to screen and quarantine international travelers at the Quito and Guayaquil airports. Elites then spread the contagious disease in superrich Samborondón, located 15 minutes from the Guayaquil airport, and infected their servants and informal workers.

Already on Jan. 30 WHO Director-General Dr. Tedros Adhanom Ghebreyesus warned the world to prepare for a pandemic. Yet two big weddings were celebrated in wealthy Samborondón the weekend of March 14-15. Scores of Guayaquil’s workers served the wealthy guests and carried the virus home to their poor communities.

Guayaquil’s nightmare stemmed from the government’s unconscionable failure to prepare for a crisis and its criminal lack of political will to create an emergency fund, which would empower the government to act decisively in the midst of the chaos. President Moreno, who many here consider “the worst president in history,” ignored World Health Organization warnings for weeks on end, earlier this year.

(A senior policy analyst at the Center for Economic and Policy Research and former foreign minister Guillame Long published an April 16 article that provides a wealth of background information: tinyurl.com/y8z3sl6c/.)

According to data the Civil Registry published May 1, more than 13,500 people died in Guayas, over and above the projected average for the months of March and April. Police discovered five containers loaded with 237 bodies in the parking lot of Los Ceibos Hospital on May 2. Only 106 could be identified.

Ignoring the dangers to workers and the population, the chambers of commerce are pushing hard to reopen Guayaquil for business.

The government imposed a quarantine on March 18 and closed the two international airports in Guayaquil and Quito, Ecuador’s capital. Then, one day after the lockdown started, right-wing Mayor of Guayaquil Cynthia Viteri ordered city vehicles to park on the runway of Olmedo International Airport to prevent the landing of a plane scheduled to return tourists to Europe. This order violated international law.

According to revised government data, there were then already 1,628 people infected in Ecuador (111 confirmed) and 1,215 people with symptoms of coronavirus in Guayas (81 confirmed). Only the confirmed numbers based on testing are posted on the Johns Hopkins world chart.

Using the revised update, the New York Times concluded that deaths were 15 times higher than reported. Ecuador’s inability to test and accurately report mortality has promoted confusion and shattered the already low public confidence in the government. (April 23)

In contrast, comprehensive preventive medicine — as practiced in Cuba, for example — is impossible in Latin American countries ruled by pro-market, pro-rich neoliberals. Only the rich can afford quality sick-care coverage in Ecuador. Currently, most people with possible coronavirus symptoms fear going to a public hospital and being contaminated.

In Bolivarian Venezuela, community organizers know each home in every neighborhood and rural district. Every family is registered in a database. This registration facilitates contact in a crisis by teams of health care workers. Ecuador has no such system.

Letter of warning to government

On April 28, concerned about preparations to reopen the economy on May 4, scores of Ecuadorian organizations for health, epidemiology, human rights, scientists and public servants signed a letter of warning that they sent to President Moreno and Minister of Government Romo. (Published in Spanish at dialoguemos.ec, April 29)

The letter states in part: “Conditions for a return to productive activities don’t exist. Due to lack of testing and unreliability of data, the State neither has the ability to confirm all suspicious-probable cases, nor to follow up on them and their contacts. We are unable to handle serious numbers of new cases. Safe working conditions are not guaranteed for health workers. If we cannot ensure safe working conditions for health workers, how do we propose to provide protection for the rest of the workers?

“Confinement and crisis have exposed the historical social inequities between economic power groups (who have continued to grow richer in this pandemic) and social groups which survive in overcrowding, precarious employment, lacking social and economic services and goods (including the most essential common good, water), and of course without access to the right to health.

“Instead of guaranteeing basic social and economic conditions and rights that make it possible for measures of social isolation to be effective for everyone, state action has resorted to criminalization, repression and abuses by the public forces against the most impoverished groups.”

The big businesses and the chambers of commerce are behind the back-to-work plan that has been rejected by most of the country, forcing the government to back off.