In a “war against workers,” President Lenín Moreno’s regime is exploiting the pandemic crisis to advance the same International Monetary Fund austerity package that provoked the great uprising in Ecuador the first week of October 2019. 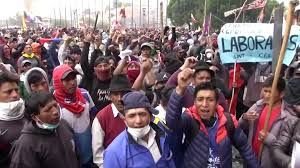 On March 21, Minister of Health Dr. Catalina Andramuño resigned, criticizing the government when she could no longer comfortably defend Moreno’s obscene layoffs and budget cuts.

Radio Alba Ciudad announced on April 19 that 72 doctors had died (which contradicted Ministry of Public Health data) and quoted Andramuño’s replacement: “Minister Juan Carlos Zevallos said that most of the doctors and nurses with Covid-19 did not necessarily catch it inside the hospitals. It was ‘community contagion’ or health personnel brought it into these settings.”

That insensitivity is nothing short of outrageous. Government officials are the biggest source of fake news.

The underlying economic catastrophe is analyzed in a series of articles by economist Jonathon Báez on alainet.org: “It is urgent to inject liquidity and prevent at all costs the outflow of capital. It is essential that the state powers allow the financing capacities of the Central Bank of Ecuador to be used by the State [the CBE is shackled by the bankers and the IMF], that the electronic money mechanism be recovered by the CBE, a payment mechanism that [Moreno] handed over to the private banks and that at present would [enable the masses] to pay for goods and services, without the need for handling physical money, which is a source of [coronavirus] contagion.”

Báez asked, “How many lives would have been saved if resources had been available? How many doctors would not have been infected in their work to save lives if they were equipped with the necessary resources?” (alainet.org, April 16)

Báez said that Moreno’s government slashed Ecuador’s national public health investment by 36 percent and fired more than 3,000 doctors and nurses in 2019. Right-wing Minister of Finance Richard Martinez paid $341 million, including interest, on March 24 to a few millionaire creditors “close to the government” in the midst of the pandemic.

The Ministry of Public Health reported that, as of May 3, at least 3,469 health workers have been infected. Twenty-four confirmed deaths include 19 doctors, two nurses, one obstetrician, one dentist and a psychologist, with three other probable deaths. Ecuadorians no longer believe their government, which cannot hide the possibility that 90 health workers and in fact many more than 10,000 citizens have died from the coronavirus.

Since the state of emergency was imposed, 1,300 health workers (including hundreds of the fired doctors and nurses) have been given temporary contracts to work under the most dangerous frontline conditions.

During October’s popular uprising, the regime spread fake news that Cuban and Venezuelan agents were destabilizing the country. This ploy paved the way for Minister of Government Maria Paula Romo to fire 382 irreplaceable medical specialists in the Cuban Medical Brigade last November.

Ecuadorian author and poet Jaime Galarza Zavala wrote in his blog that the Moreno government’s hate-filled reactionary agenda lay behind its incompetence. “The regime did nothing! Absolutely nothing! It did not acquire the necessary medicines and equipment, nor did it organize the hospitals or prepare health contingents.”

Galarza added, “Lenín Moreno reigns but does not govern. He is happy to be wheeled onto the red carpet of the Washington White House and, at his best, to read the ‘bad handwriting’ of an official communiqué written by some mediocre person.”

The central government left every province and every city and community to cope with the coronavirus crisis unaided. In many cases the armed forces and police invaded Indigenous communes and used extreme violence to enforce curfews. Military police cut the hair of Indigenous young men to humiliate them.

The greatest danger was that armed forces would contaminate the communes. In response Indigenous leaders organized the people to block access roads which impeded delivery of their agricultural products to the cities where they were normally sold.

Leonidas Iza Salazar, president of the Indigenous and Peasant Movement of Cotopaxi, was interviewed in the city of Loja in the south of Ecuador on March 23 by Radio Periférik. (rebelion.org) “The health crisis affects all peasants, Indigenous peoples and Afro-Ecuadorians,” said Iza. He urged Ecuadorians to honor “the principles of solidarity, reciprocity, ‘randi randi’ [the Quechuan phrase is translated “to give and receive”], because we all need each other.

“Indigenous and peasant communities do not have coverage from the public health system. That is why we have strengthened our internal ancestral health system; we have our ancestral doctors. However, diseases like the coronavirus are complicated.”

Iza warned that “a single outbreak in our communities could cause a collective panic, since our practices in all activities are developed collectively. We cannot move our products from the countryside to the big cities now. Our people don’t only work in the countryside, but also in the cities like Quito, Guayaquil and Cuenca. There is no medical testing so that our members can go back to the communities.

“We are asking the central government to set up an emergency health fund. There are families who live from day-to-day, from informal trade, from daily sales, from piecework. None of the national government’s policies are designed for this sector.

“The government should buy directly from the peasants, and transfer the products free of charge to [the informal and poor] sectors of the population. Guarantee the direct transfer of our products to the cities to ensure that production in the countryside would not stop due to low prices. We have already lowered our prices, but the middle men have not. And that is exactly where speculation is born.

“We cannot allow the National Government to only guarantee the profits of the large food companies and prevent us small farmers from taking our products to the city.”

Another Indigenous movement, the Confederation of Indigenous Nationalities (CONAIE), negotiated with the central government to end the October 2019 uprising. On May Day this year, CONAIE proclaimed that what was needed is to unify “the demands of the Indigenous movement, the trade union movement, the popular organizations, the women’s movement and the people in general.” The May Day manifesto demanded that the rich be made to pay for the economic catastrophe they have created, not the people.

Multinational mining and oil operations continue during the pandemic, adding to class conflict and threatening communities of Indigenous peoples with extinction. The rupture of three oil pipelines caused by a sinkhole on April 7, in the northern Amazon, impacts 150 isolated Amazonian communities whose well-being depends on the rivers.