This editorial first appeared on workers.org on May 18, 2018.

We celebrate on May 19 the birthdays of two world-bending revolutionaries, Ho Chi Minh and Malcolm X. 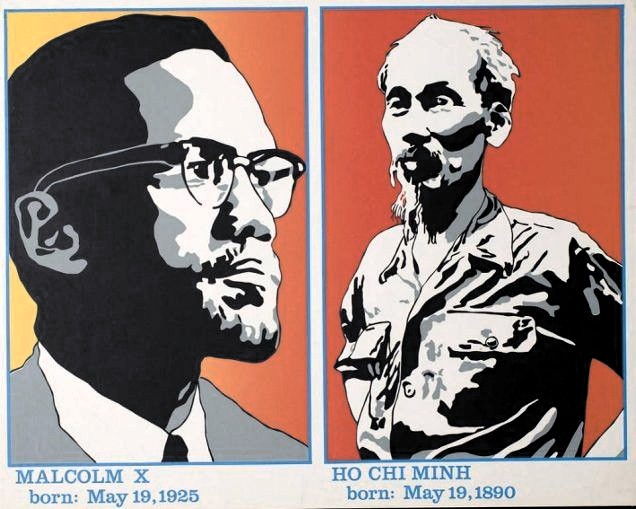 Born in 1890 in central Vietnam, Ho Chi Minh was the Marxist-Leninist communist who forged and led a people’s movement and army that defeated the invading imperialist might of both France and the United States and ultimately liberated Vietnam from colonialism.

Born in 1925 in the U.S., Malcolm X was the African-American leader who raised to global attention the concepts of Black nationalism, Black self-defense and the right of self-determination of Black peoples. Malcolm X also made a major contribution to the global movement for Pan-Africanism.

Neither met the other, yet their deeds and words intertwine, and together they continue to inspire us toward revolution.

At this moment, as the U.S. ruling class fans the deadly fires of racist hatred, Malcolm X and Ho Chi Minh unite to give a profound lesson in building international solidarity with oppressed people and nations.

In 1924 — the year before Malcolm X was born — at the Fifth Congress of the Communist International in Moscow, Ho Chi Minh made a presentation during a session on the “National and colonial question.” He emphasized the importance of support for the Black liberation struggle in the U.S., saying in part: “It is well-known that the Black race is the most oppressed and the most exploited of the human family. It is well-known that the spread of capitalism and the discovery of the New World had as an immediate result the rebirth of slavery. … What everyone does not perhaps know is that after sixty-five years of so-called emancipation, [Black people in the U.S.] still endure atrocious moral and material sufferings.” (tinyurl.com/n5nlck6)

Forty years later, in 1964, Malcolm X, El-Hajj Malik El-Shabazz, put the Black liberation struggle in a worldwide context, saying: “It is incorrect to classify the revolt of [Black people] as simply a racial conflict of Black against white, or as a purely [U.S.] American problem. Rather, we are today seeing a global rebellion of the oppressed against the oppressor, the exploited against the exploiter.” (Malcolm X Speaks)

And he acknowledged the centrality of the national liberation war led by Ho Chi Minh to that global rebellion, saying: ”Viet Nam is the struggle of all third-world nations — the struggle against imperialism, colonialism and neo-colonialism.” (1972 interview with Yuri Kochiyama, tinyurl.com/k93cq2n)

The voices of both these revolutionaries ring out with the clarion call of SOLIDARITY as the path to a future of justice and liberation.

They remind us that we of the multinational, multigendered, global working class have a common oppressor in imperialist capitalism.

We can resist its racism, its anti-woman and anti-LGBTQ bigotry, its anti-immigrant hatred.

We can — and must — rise up in resistance.