What motivates some people to dominate and/or destroy, based on their illusory sense of superiority, even when it is against their own interests? Who are these people who profess to be acting in the name of “freedom and individual liberty,” while gathering together and refusing to wear protective masks in the midst of a pandemic, potentially infecting others? 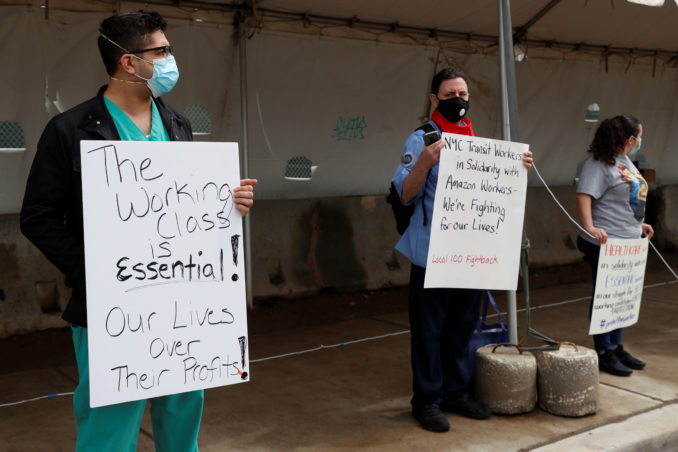 NURSES in scrubs and masks joined Amazon workers to protest against the lack of coronavirus protection for frontline employees as part of a retail giant mega-strike.

They indignantly protest loudly and menace health care workers who urge them to desist. They are influenced by the president and other right-wing demagogues, who incite them to take to the streets to oppose lifesaving shutdowns during the COVID-19 pandemic, while they promote racism and terror.

Despite the dangerous epidemic, class relations assert themselves: Bosses fire “frontline” health care workers for demanding personal protective equipment so they can perform lifesaving services in hospitals. Prison guards neglect and abuse prisoners who have little protection against COVID-19, while they are also susceptible to it. (See “On Prison Guards” by Mumia Abu-Jamal posted May 5 at workers.org.)

What motivates a person to act against their own interests, even their survival, to harm others? The most important basis for how one sees the world is formed in one’s earliest human interactions. That first sense of one’s place in the world can expand, depending on how much broader contact is allowed with new people. One learns to cooperate with peers and to value others’ needs.

But prohibitions and restrictions on the development of relatedness, stemming from early experiences with significant people, can stunt that growth and prevent a person from respecting others’ needs. These restrictions take the form of barely noticed negative assumptions about others, becoming prominent at times of crisis or an opportunity for change. This can be true with bigoted thinking, which is learned, and can become more entrenched in a crisis. Or it can be unlearned.

To loosen restrictive thinking requires challenging and critically viewing unnoticed assumptions.  The individual can then reject previous assumptions or hold onto them and reject the person who challenged them. The outcome depends on a person’s degree of connectedness to other people and how powerful the original prohibitions were and still are.

Some people who only see their personal circumstances can be educated to gain an understanding of the wider world. If they can rid themselves of old thinking and can change, learning to connect with others and develop solidarity, then they can progress.

Yet Socialist Cuba has reported 1,754 cases and 74 deaths (7 deaths per million people). It has sent medical workers to over 20 countries to share their medical and community health expertise to fight the virus. China, where the disease hit first, has no new deaths. Vietnam has 288 cases and no deaths.

The U.S. media’s response to Cuba’s offers of assistance to other countries is to attack those accepting Cuba’s aid. They explain away the relative success in socialist countries like China, Cuba and Vietnam in overcoming the pandemic by attributing it to so-called “authoritarianism” and “obedience” of their populations in accepting quarantines.

These distortions, promoted by big business, serve to maintain the illusion that the U.S. and other capitalist countries are “free,” that workers exercise their freedom by ignoring the dangers of infection, rejecting protective measures and returning to work during the pandemic.

But a growing number of workers of all nationalities and genders are resisting return-to-work orders and protesting, demanding a safe workplace, PPE and hazard pay.  As the death toll mounts, some people are rejecting their old assumptions and waking up to the reality of the crisis, understanding they share a common situation with those around them.

When they resist, they see themselves in a new way. They are scared, but they may feel more effective and part of humanity. Those who hold onto their fixed positions, in a world that is crumbling around them, fear the abyss and grip their self-image even tighter.

But what makes real change, which has a vast influence on society, is the united struggle of the multinational, multigender working class, the rejection of all bigotry and the building of solidarity. With that comes the growth of class consciousness.  Then an anticapitalist, pro-socialist perspective can develop.

Harris is a clinical psychologist in New York City. Kathy Durkin contributed to this article.