Here is a slightly edited transcript of Amber-Rose Howard’s talk during the April 9 Workers World Party webinar. Howard is the executive director of CURB, Californians United for a Responsible Budget. Experiencing a felony conviction as a young adult propelled Howard into a lifetime commitment of organizing against the prison-industrial complex and building up the power of Black people and all others impacted by state violence. 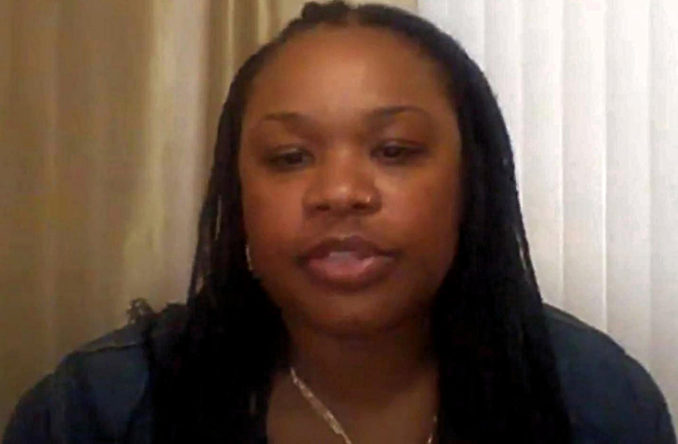 Thank you for having me on. I really appreciate your listening ears. I work with a coalition of over 80 organizations that was founded in 2003 whose mission is to reduce the number of people in prisons and jails, reduce the number of prisons and jails in the state, and then capture budget savings and shift those resources into community-based alternatives to incarceration and community resources that actually build safe and healthy communities. We envision a world without prisons. And so this is our way of moving toward that goal.

We don’t believe that anybody belongs in a cage. And I think we have to hold true to that sort of abolitionist framework. Because when we start to say that some people belong in the cage, then that makes room for many people to be put in cages, and that’s why we have an incarceration crisis on our hands right now. California spends over $16 billion on the corrections budget, and it grows every single year. We have about 35 prisons in the state, including lots of other prisonlike institutions, including for youth and including contracts with private companies.

It is important to understand that we need to look at this from a public health lens. We see lots of organizations, lots of groups all across the state, all across the country even, calling for the release of people. Many people are focused on only releasing people that have short time left to serve, only releasing people who have low-level offenses which are nonserious, nonviolent, nonsexual. We’re calling for those distinctions to not be a part of the equation. We want to make sure that we’re putting forward demands that would allow folks who are elderly and medically vulnerable to be released, regardless of their conviction type. Again, this is a public health issue.

When we’re only calling for the release of people who are in the category of those low-level offenses, I think what we’re doing is forgetting to recognize that people have spent decades inside transforming themselves. Just as those of us who are not incarcerated spend time transforming ourselves. People on the inside do that as well.

We also want to make sure that we’re calling for vast clemencies and releases at this time. You know, our governor has made a plan to release about 3,500 people from California state prisons, and those releases will come from accelerated parole dates, so that’s folks who were going to be paroled in the next 30 to 90 days already.

So we’re calling for our governor to include those folks — to stop setting forward and perpetuating that false dichotomy of who’s deserving and undeserving to be protected. Our governor put forward a moratorium on the death penalty last year, and we don’t see a difference and when you’re leaving folks inside right now, who deserve to be released, that’s no different from sentencing them to death. People will die.

There’s over 60 staff members in the California Department of Corrections who tested positive. There’s over 30 people who are imprisoned who have tested positive, including people in the women’s prison. Chino Institution for Women is right now on lockdown. And we know that they don’t have resources to protect themselves. They don’t even have resources to, you know, keep their living spaces clean as we’ve already heard.

That’s the case for many folks who were in prison.  I think that we have to really focus on making sure that we’re including people with all conviction types when we’re thinking about releasing elders and releasing people who are medically vulnerable, and we need clemencies now.

We have a campaign that we have partnered with RAPP (Release Aging People in Prison) and the Parole Preparation Project in New York, along with the CCWP (California Coalition for Women Prisoners) here in California, where we’re calling for clemency coast to coast. Governor Newsome and Cuomo out in New York set themselves forward as very, very progressive governors — they have not proven that. Lives are in their hands and they have the opportunity to save lives. So we’re making sure that we’re calling for and speaking up for folks who are being overlooked in this moment and trying to protect our elders.

We have been doing call-ins, emails to our governors, and we have a Twitter campaign that we’re running to sort of lift up that work. We’re doing another Twitter storm tomorrow. So we’ll be sending out materials to folks tonight to be able to join us in calling for clemency coast to coast. You know the only answer is vast releases.

People who are incarcerated will not benefit from any other kind of response except for release. And so I think another question that folks ask when we talk about releasing folks is — Where will people go? Well, you know, people have families — people’s families are ready and able and willing to accept them back home.

And so if we don’t have vast releases, we will see people die. So that’s the work that CURB is focused on right now in response to this crisis, and I’ll share our demand letter in the chat so that folks have access to that. It’s on CCWP’s website, and it talks all about our DROP LWOP campaign where we’re calling for the end of “life without parole” sentencing in the state of California, and we’re calling for the commutation of every person who is right now serving time for life without parole.

Why a sweeping call for release?

Moderator Makasi Motema read a question from the chat: Why is a sweeping call for release more effective than making prison conditions better and protecting inmates from the spread of the virus? What about folks who do not have a place to go? Or the places they can go are not adequate for protecting them from the virus?

Howard: I’d love to address that question. I think, first of all, folks have to realize that in a place like California — and I’m sure the same thing is true for many other states — we are at a federal-mandated cap and our prison population is at 137.5 percent. It is impossible to give people enough space to social distance. And we have seen that it’s impossible for people to get the resources they need in order to keep themselves clean and to keep their living spaces clean. The only answer is release.

Again, when we think about where people will go we cannot underestimate the number of people who already have family members supporting them while they’re incarcerated, who are willing and ready and able to accept them back home and into their communities once they are released. And when we think about the fact that California spends over $16 billion on their prison budget, we can shift that money so that it goes to community-based organizations that have already been working for decades, so that they can expand their capacity to take care of folks.

There are empty houses, they are vacant places that can be taken over by groups who are very well equipped to take care of folks when they come home. That can be used to expand the capacity. So you know the answer of where will people go? Well, they’ll come here; they were living in the community before they were incarcerated. And so there are places in the community where they can return to. We cannot underestimate that. Thank you.