Over 100 cars, driven by people from all over Ohio, circled the state’s Department of Rehabilitation and Correction in Columbus, the capital, on April 24.  From there, the car caravan went to the Statehouse to protest the dangerous conditions in state prisons. Marion and Pickaway correctional institutions have made national news as the country’s top two “hotspots.” Each has a COVID-19 infection rate of 80 percent among prisoners.  That’s over 3,500 cases between the two prisons! 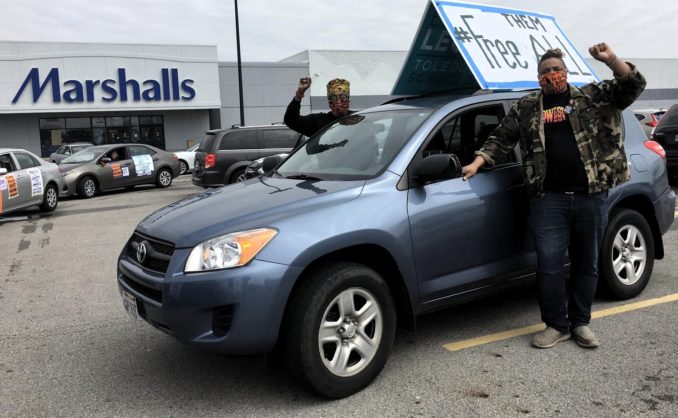 Ohio activists gather to encircle Department of Rehabilitation and Corrections, then the Statehouse with a car caravan, April 24. Credit: WW Photo: Susan Schnur

The Ohio Prisoners Justice League and Ohio Organizing Collaborative, caravan organizers, are demanding that Gov. Mike DeWine release 20,000 prisoners — 40 percent of those in state custody — before May 1. That number would encompass those whose sentences are almost over, those imprisoned for “nonviolent” offenses, elderly inmates and those with health conditions that make them more vulnerable to infection.

After reaching the Statehouse, a group of about 50 people staged a socially distant die-out on the lawn. A family with children held signs pleading for their father’s life.  The slogan “20K by May” was chanted, written on signs and car windows, and worn on T-shirts and cloth face masks. Some signs read: “Prisoners’ Lives Matter!” Extremely popular was the slogan, which is the running theme of many prison protests: “Free them all!”

Seventeen prisoners have died from the virus in Ohio’s state prison system, which has an overcrowding rate of 130 percent. Another six prisoners died in the state’s only federal prison in Elkton. Without a massive and immediate prisoner release, the death toll will rise exponentially — imposing a death sentence on an untold number of prisoners.

Ohio has the sixth-largest prison system in the U.S., with 28 adult and three juvenile institutions holding about 50,000 prisoners. African Americans, only 13 percent of the state population, comprise 45 percent of the prison population. Mass incarceration is indeed “the new Jim Crow.”

Gov. DeWine has proposed to release a mere 100 prisoners, including rich white-collar criminals, such as Thomas Noe, convicted of laundering money for the 2004 George W. Bush presidential campaign and being involved in the corruption scandal known as “Coingate.”