“These anti-choice governors have created a health crisis within a health crisis,” Julie Burkhart told the April 16 Los Angeles Times. She is the founder and CEO of Trust Women, which runs nonprofit health care clinics in Wichita, Kan., and Oklahoma City, Okla. 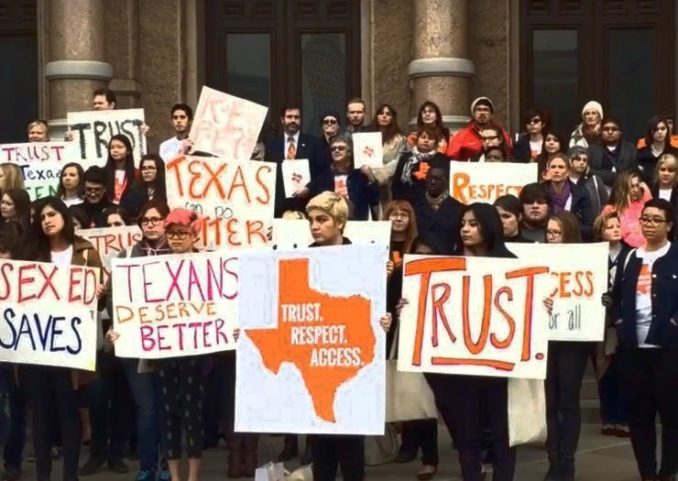 In Texas, the Trust. Respect. Access. coalition was formed by 14 organizations in 2019  to push back against the anti-abortion ordinances by working with local activists to speak out.

Burkhart was referring to governors in eight Southern and Midwestern states — Texas, Oklahoma, Tennessee, Alabama, Mississippi, Louisiana, Ohio and Iowa — who took it upon themselves to use the COVID-19 pandemic as a chance to ban abortions. They contend that since abortions are “elective” procedures and not “essential” medical care, scarce personal protective equipment should not be used to provide them.

In addition, a total of 18 states, including Kentucky, Utah, West Virginia, Alaska, Arkansas and Indiana, signed a friend of the court brief supporting the Texas ban.

The bans were swiftly opposed by the Center for Reproductive Rights, along with the American Civil Liberties Union, the Planned Parenthood Federation and the Lawyering Project, among others. National medical organizations weighed in as well, attesting that abortion is time-sensitive, necessary care for women and gender nonconforming people as part of comprehensive reproductive medical care.

The abortion bans have been aptly labeled “political opportunism.” Nancy Northup, president and CEO of CRR, commented: “These emergency abortion bans are an abuse of power and part of an ongoing effort to use sham justifications to shut down clinics and make an end run around Roe v. Wade.” (Roe v. Wade is the Supreme Court decision that legalized abortion in 1973.)

Northrup added: “These same states have tried to ban abortion access for years; no one should be fooled that this is warranted by the current crisis. We will use every legal means to ensure that abortion care remains available during this critical time.”

After legal skirmishes, most appeal courts put the bans on indefinite hold by granting temporary restraining orders. Although the far-right 5th Circuit Court of Appeals backed Texas Gov. Greg Abbott’s executive order a second time on April 20, Abbott backed down completely on April 22 after his anti-choice bias was overruled by a left-leaning judge.

Joan Lamunyon Sanford, executive director of New Mexico Religious Coalition for Reproductive Choice, told the Los Angeles Times that the number of women traveling from Texas doubled by mid-April. She added, “Two weeks ago a 19-year-old arrived on a Greyhound bus from Louisiana, more than 900 miles away.”

But many workers have been unable to travel to use clinic services, particularly Black, Brown and Indigenous people in low-paying “essential” jobs who couldn’t afford to miss several days work — or couldn’t scratch together enough money to pay for child care, gasoline, food and motel in addition to the cost of a procedure.

The Los Angeles Times interviewed Dr. Angela Marchin in Aurora, Colo., who said, “The pandemic is making these decisions even more complicated for people.” She cited a mother of two whose morning-after pill had failed; she was seeking a clinical abortion because two previous pregnancies had injured abdominal muscles and required surgery costing $10,000.

Social distancing to stop the spread of COVID-19 has required clinics to space out appointments, reducing available time for patients. Preliminary interviews with patients are now conducted via Skype or by phone. Dr. Erin King, who runs the Hope Clinic for Women in Granite City, Ill., stated that only one patient at a time is in the building. Patients only see one or two staff members for a limited time, whether to get medication, have an ultrasound or the actual procedure, followed by recovery. “There’s just less availability for patients,” she said. (Rewire.News,  April 21)

“A lot of our patients have lost their jobs and aren’t working right now or have children home from school. It’s very difficult for them to get to us … from a travel standpoint, from a childcare standpoint and from a financial standpoint.” Dr. King noted that many patients are applying for funding from local abortion funds, part of the National Network for Abortion Funds (abortionfunds.org).

“We’re also decreasing the price for patients,” King added. “We just want them to be able to be seen and not have to worry financially because the unemployment rate is astronomical. It’s hit communities around us very hard.”

What hasn’t ended is that many clinics are still being relentlessly, physically hounded by anti-abortion zealots, many of whom do not observe social distancing and menace patients by standing close to entrances and blatantly coughing on them. The National Abortion Federation has started a fund to help clinics hire outside security guards to stop aggressive “Right-to-Life” haters. (Rewire.News, April 15)

Limiting access to abortion is one of the many life-altering, life-threatening effects of COVID-19. As right-wing forces push their agenda while the pandemic rages, this is a powerful reminder that the demand for universal, comprehensive, free health care for all must always include the reproductive justice goal of accessible, safe abortion.