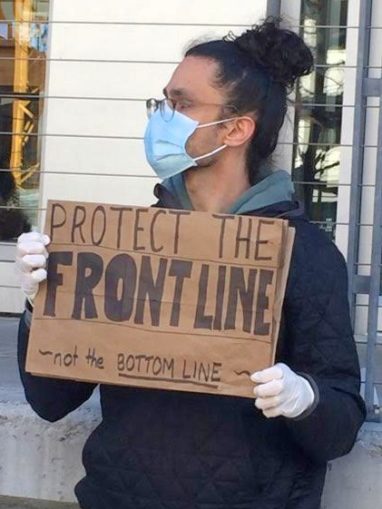 Calling out Amazon’s owner Jeff Bezos, the world’s richest billionaire, one worker said, “It’s criminal that the richest corporation in the history of our planet is refusing to pay its workers more than $2 dollars per hour for hazard pay and is not providing its employees with adequate protective equipment. This is not enough! Amazon can afford it!” (tinyurl.com/rpjjjls/) Amazon owns Whole Foods.

Lisa Wilson, who works as a cashier at Shaw’s in the working-class neighborhood of Hyde Park, shared using a bullhorn, “I feel scared. I feel like I’m going to get sick. I feel like it’s inevitable. But at the same time, not working is not an option. With my insurance, if I get sick, it’s going to be hard. The idea that I have to put my life on the line is crazy.”

Demonstrations by grocery workers, fighting for their very lives, have begun to extract critical worker protections and compensation from the grocery bosses, including the right to employer-provided protective gear. A new statewide guideline in Massachusetts allows no more than 40 percent of maximum store occupancy and adds to earlier mandates for single-lane shopping and social distancing protocols in grocery stores at all times. Some grocers are also bending to demands for improved hazard pay, raising recent wage increases above the $2 an hour pittance that Amazon’s Whole Foods has insultingly offered.

Over 40 grocery workers have died from COVID-19. The first in Massachusetts was Vitalina Williams, who died April 4 at 59. She worked two part-time cashier jobs: at Market Basket in Salem and Walmart in Lynn. Williams migrated to the U.S. in the 1990s from a poor Mayan community in Tecpán, Guatemala, to support her mother and nine siblings back home and to better her own life economically.

Williams is survived by her husband of 22 years, Dave Williams, who also worked at Market Basket. “She was not the love of my life.  She was my life,” he said.

Any gains won by grocery workers are gains for us all!