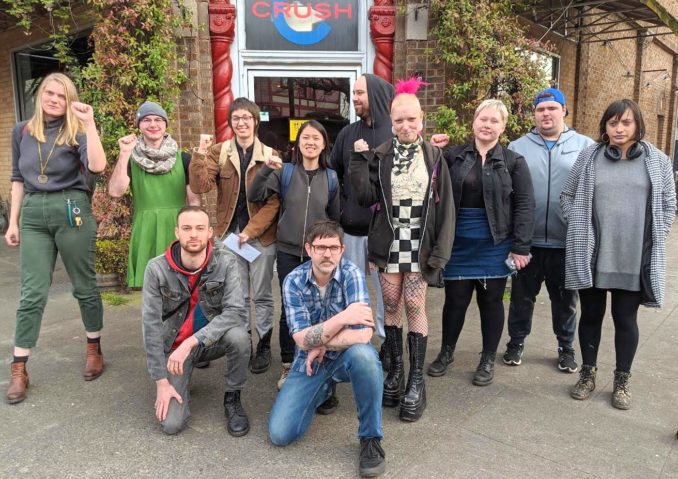 Crush Bar Workers Collective after their March 17 victory in Portland.

The day before the LGBTQ2+ bar was occupied, Hannah Gioia, Crush worker and representative for the bar and cafe workers’ union, the Crush Bar Workers Collective, said, “Yesterday we all were informed via text or phone call or from the Crush Facebook page that the bar was shutting down and all employees would be laid off. When pressed for accrued sick time pay, half-time pay for our scheduled hours one week out, and guarantee rehires when the bar reopens, the owner said, ‘No, no and no.’ ”

“We do not predict that we can wait out a government agency’s abilities to process this charge. We need resources now. Getting laid off is already devastating, but during a public health crisis, it’s catastrophic. We are out of options, and we expect this owner to do what is legally required and what is right by us.” (tinyurl.com/sglefck)

The next day the workers demanded and got another meeting with Clarke. When their demands were refused, they sat down. Shortly, Clarke called the police.

Crush Bar worker and CBWC organizer, Emily Bennett, told Workers World, “John Clarke advertises these places as safe places for queer people. But when queer workers organize and make demands on him for what is rightfully due us, he calls the cops.”

But within 24 hours of the occupation, the union won sick leave pay for the workers.

According to Bennett, “The Portland queer community has been very supportive, offering the workers aid at Crush Bar Workers Collective Hardship Fund at gofundme.com.”

Lewis is a retired food service worker and member of UFCW Local 400.