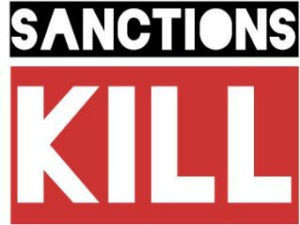 From the U.S. Peace Council on April 9.

The global spread of COVID-19 has exposed the illegal and immoral practice of imposing unilateral coercive measures (economic sanctions) by the United States government against more than thirty nations. The economic war against those nations had already resulted in unimaginable suffering of the people in the targeted nations even before the COVID-19 pandemic.

With the devastation from the global pandemic, the targeted countries — especially Venezuela, Cuba, Iran, Syria and Zimbabwe — are finding it prohibitively difficult to protect and save the lives of their citizens in the face of the ongoing global emergency.

These sanctions constitute crimes against humanity.

Instead of helping these countries fight the devastating effects of the COVID-19 pandemic, the government of the United States is using the public distraction caused by the pandemic to intensify its military actions against the targeted nations. The U.S. is increasing its threats against Iran and Syria by engaging in a silent buildup of military forces in Iraq again, and it has dispatched its Naval warships to the shores of Venezuela, demanding the total surrender of the Venezuelan government to the United States.

Only a global wave of popular protest can stop these antihuman policies and actions.

We are dealing with a global emergency and must act quickly.  Sanctions kill!

Please sign on to our call in several languages: tinyurl.com/tryld8r/.