As of March 30, the World Health Organization reports that thus far there are upwards of 635,000 confirmed cases of coronavirus and over of 36,000 confirmed deaths, worldwide. These numbers likely reflect underreporting.

Although current socioeconomic systems seek to push the most vulnerable people further into the margins, this era has seen great solidarity and rejection of capitalist, colonial and imperial responses to the COVID-19 crises.

People are stepping up to help one another — to help ourselves.

Prisons, even on a good day, are deadly and provide conditions for the swift spread of any disease. Conditions in Italy, one of the countries hardest hit by the virus, have sparked a wave of prison uprisings. Prisoners in Salerno were the first to rise up in early March, followed by inmates at Poggioreale in Naples on March 8. Roughly 900 prisoners ripped out electrical cables and water pipes, tearing up four entire sections of Poggioreale. (msn.com, March 9)

That same day saw uprisings in prisons in Alexandria, Foggia, Frosinone, Modena, Palermo, Pavia and Vercelli. By March 9, that spirit had spread and there was unrest in 22 other prisons, including major facilities such as Rebibbia in Rome and San Vittore in Milan. At least 6,000 inmates revolted around Italy, citing abysmal overcrowding and unsanitary conditions, and the lack of visits from family and friends to help keep prisoners connected to the outside world. (Corriere della Sera, March 10) 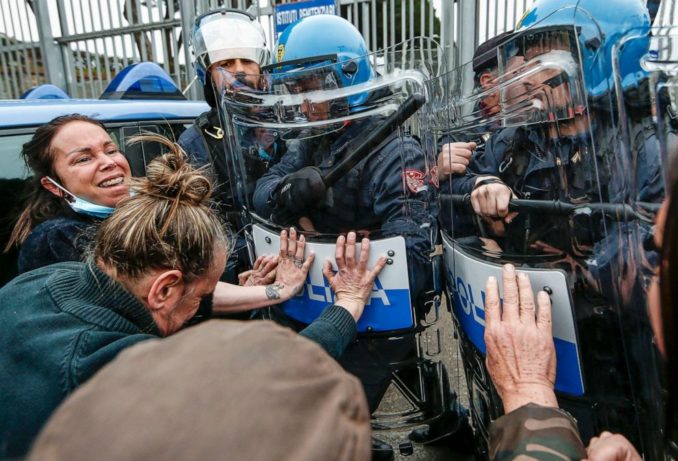 In Rio de Janeiro, quarantined Brazilians protested far-right President Jair Bolsonaro from their windows and balconies with their voices and pots and pans. Bolsonaro had been seen March 15 encouraging and mingling with his supporters despite medical advice to stay indoors after being exposed to coronavirus during a trip to the United States. (He has since tested positive.) (theguardian.com, March 25)

Since taking office in January 2019, Bolsonaro has carried out attacks on Indigenous and Afro-Brazilian people, human rights, the arts and the Amazon Rainforest. The balcony protests are happening even in richer neighborhoods that voted in favor of Bolsonaro. Many take this as a sign of shifting class consciousness.

Hawaii saw car convoy protests on March 22. Many signs demanded that tourists who came to quarantine on the island fly home. Dozens of tourists brought the virus with them, and many more, in panic, bought much needed supplies. “Hawaii is no. 1 in the U.S. for most multigenerational families living under the one roof. We are so vulnerable to rapid spread,” tweeted Khara Jabola-Carolus on March 16.  (Hawaii News Now)

Hawaii, like many other tourist-heavy areas, even saw a massive influx of rental properties return to the market because of the profits to be made off tourists using AirBnB. Rather than focus on the health of its Indigenous populations in the midst of this pandemic, Janice Okubo, a spokesperson for the Hawaii Department of Health, worries that a “stigma [is] developing against visitors in Hawaii.”

On March 24 at 8 p.m. Indian Prime Minister Narendra Modi announced a total lockdown for three weeks to go into effect that midnight. Many were unable to prepare for the coming weeks due to the timing of the announcement and the closing of shops. The country’s roughly 100 million transient migrant workers face increasing food scarcity. (theatlantic.com, March 25)

One of Europe’s largest informal migrant camps in Moria, Greece, has 20,000 people living in an area designed to house no more than 3,000 on an island that has six intensive care beds. Volunteers there are aware of the conditions ripe for spread of the disease and are working to raise awareness and improve hygiene. They were able to establish new food lines to prevent people from having to stand in long queues. (theguardian.com, March 21)

At Vathy Camp in Samos, the Movement on the Ground, a Dutch nongovernmental organization, hung hand sanitizer dispensers from trees. Mah-roof Sahffi of Kitrinos Healthcare says 80 percent of her consultations are for respiratory infections, from migrants needing to spend so much time around the fires they use to keep themselves warm. Sahffi worries these complications leave the migrants at higher risk for contracting COVID-19.

French President Emmanuel Macron announced school and university closures, cancelations of major sporting events, curtailing of public transit and closure of tourist attractions on March 12. Yet Macron had decided to go ahead with upcoming March 15 elections while also limiting public gatherings to less than 100 people. Yellow Vest protesters defied Macron’s restrictions in Paris on March 14, marking 70 consecutive Saturdays in the streets. They have had many criticisms of Macron’s government, including his push for pension “reform.” (France 24.com, Reuters.com, March 16))

United Nations ambassadors from China, Cuba, the Democratic People’s Republic of Korea, Iran, Nicaragua, Syria and Venezuela banded together in solidarity to urge U.N. Secretary-General António Guterres to lift the sanctions imposed on these countries and others. Sanctions kill those affected and are a detriment to the entire planet’s health.  (foreignpolicy.com, March 24)

On March 24, U.N. High Commissioner for Human Rights, Michelle Bachelet, urged humanitarian exemptions to sanctions be authorized for essential medical equipment and supplies. “The populations in these countries are in no way responsible for the policies being targeted by sanctions, and to varying degrees have already been living in a precarious situation for prolonged periods.”

This has always been true of the people impacted by mostly U.S.-imposed sanctions in over a third of the world, not just in the face of a virus that respects no borders. Cruelty has always been the point of sanctions, as even Bachelet admitted.

Despite harsh sanctions, China and Cuba have been sending doctors, medicine and supplies across the world in the face of this pandemic. They consistently demonstrate international solidarity with oppressed people.

While conditions during this pandemic remain dire and will continue to worsen, people’s resolve to help one another survive remains strong. Mutual aid groups provide for and protect the vulnerable, including the elderly, incarcerated, undocumented and unhoused.

As Big Door Brigade, the Seattle-based activist collective, explains, “Mutual aid is when people get together to meet each other’s basic survival needs with a shared understanding that the systems we live under are not going to meet our needs. …  Mutual aid projects are a form of political participation in which people take responsibility for caring for one another and changing political conditions, not just through symbolic acts or putting pressure on their representatives in government, but by actually building new social relations that are more survivable.” (bigdoorbrigade.com, March 16)

Mutual aid aims at solidarity, not charity. Charity is the social service delivery strategy in the U.S. where aid from the rich comes in the form of crumbs with strings attached. Charity often blames the poor and vulnerable for their conditions, while upholding the systems that put them there in the first place.

Janelle Walter of Tacoma Mutual Aid Collective explains, “Mutual aid is community. Relying on each other builds trust and capacity. It removes the need for paternalistic approaches to aid, like we see with nonprofits and other state programs.” Building trust and capacity to solve problems and meet immediate needs are some of the most important social relations we need to get ourselves through this moment and prepare us for the coming crises ahead. (mutualaidhub.org)

Some of the most prominent examples of mutual aid in United States history were introduced by the Black Panther Party — from free breakfast programs to health programs that included acupuncture treatment for drug addictions. Sex workers have built extensive mutual aid networks and often contribute directly to those around them.

Direct, material aid and analysis around shared conditions, combined with mass resistance in whatever forms conditions allow, are things that create a movement. This moment — and every moment — calls on each of us to look to our neighbors and provide what we can, where we can.