If the Gallup poll is correct, according to the Wall Street Journal and CNN, President Trump currently has a 49 percent approval rating, as of this writing. This matches the highest approval rating he has ever had.

Any decent or thinking person must be astounded by this fact. 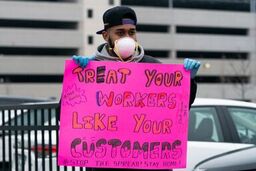 Trump has not only misunderstood COVID-19, he has completely mishandled the coronavirus crisis. His failure to implement critical policies, to rapidly get ventilators and PPE (personal protective equipment) to workers, and to stall on social distancing has resulted in not only dangerous working conditions, but the potential for the death of millions.

His latest call for people to return to work by mid-April was putting the lives of millions of workers in harm’s way. Fortunately, other heads prevailed, and the stay-at-home policy stands in place.

What clearly guides Trump is not science or concern for the well-being of the masses. It is the bottom line for the capitalist class and his position in government.

The COVID-19 pandemic has changed reality as we know it. Nothing will ever be the same.

Where the working class goes from here and how it can organize to defend its interests under the cloud of this pandemic, however, remains as critical as ever.

That is why understanding the reactionary, white supremacist, right-wing character of the zealots at the helm in the White House is critical.

It is important because this health crisis demands that those in power be mightily challenged on how they are handling this epic virus. It is important because workers must once again be reminded, like they were during the Great Depression, that it is we who have the real power in society. It is the working class and the oppressed, and only us, who are the real agents of change.

And change is desperately needed because four more years of these zealots is an extreme danger not only to the U.S. working class, but humanity itself.

If the predictions that 100,000 to 200,000 people could die from COVID-19 are right, the blood from the deaths of each one of these people is on the hands of the zealots in the White House.

From the beginning of the Trump administration, he has surrounded himself with the most reactionary bureaucrats and right-wing conservatives he could find. From Steve Bannon to Mike Pompeo, it is a veritable who’s who of enemies of the workers and the oppressed.

They align with the politics of right-wing billionaires like the Koch brothers who have for a long time developed behind-the-scenes reactionary policies of every kind, including busting unions and public education. In politics, they have made it so that it is donors who have the real power, not elected officials.

All these vile creatures in and out of the White House have shared a worldview in common: white supremacy, xenophobia, imperialist domination and complete loyalty to capitalism. They will do anything to maintain their power, including veering to fascism if needed in order to maintain their hold over the system.

Yet it is these elements who are steering the course on COVID-19.

But that is the opposite of what is happening in Washington.

Who does New York Gov. Andrew Cuomo have to call about ventilators for the people of New York?

He has to call the “Slumlord Millionaire,” Jared Kushner, the very one who greedily bought rent-stabilized buildings and then terrorized residents until they moved out. His company, Kushner Companies would then “flip” the buildings and sell them for a huge profit.  (Mother Jones, March 27)

Gentrification of working-class neighborhoods has just about become an existential crisis. Entire communities around the world no longer have access to affordable housing. Jared Kushner is one of those to blame.

Does anyone really think he gives a damn about the thousands of Black and Brown people in Elmhurst Hospital in Queens N.Y., who are suffering from the virus?

The right-wing of this country is emboldened because they have a zealot in the White House. That is why almost 20,000 vigilantes marched in Virginia earlier this year under the pretext of gun rights. It was really an armed show against the left and the working class. It was a KKK rally in another form.

Dr. Anthony S. Fauci, the director of the National Institute of Allergy and Infectious Diseases, has become someone who is trusted when he speaks about the virus. He seems to know what he is doing and to have concern for human beings.

Yet Fauci is now receiving death threats and is the victim of a hostile social media campaign for challenging and appearing to one-ump Trump. (NY Times, March 28)

The right-wing is that foolish. They would defy science; they would defy common sense in order to bolster the zealot-in-chief. Many, such as the reactionary pastors in Louisiana, who called on their congregation to come out in defiance of social distancing, thoughtlessly put themselves and their milieu in danger.

But science matters. Facts matter. And for Trump to misinform, lie, deceive, inflame puts every single person in danger.

A call to arms

Vice President Pence is one of those who is part of the White House COVID-19 team.

Pence is against same sex marriage and a dangerous homophobe who has supported “conversion therapy.” (NY Times, November 2016) He is also a climate change denier. (Climatewire, July 2016)

According to the March 3 Guardian, while he was the governor of Indiana he “botched” the response to the biggest public health crisis the state had seen around the HIV crisis.

With the exception of Dr. Fauci, the White House COVID-19 team is a veritable who’s who of antiscience, gentrifiers, antigay, anti-abortion, mysoginist white supremacists.

Is it any wonder nurses are striking for PPE?

There is a great risk that these zealots will take advantage of the COVID-19 pandemic to tighten their hold on the capitalist system and impose policies that can turn back any progress the workers have made.

Already, when all attention should be placed on saving humanity, the Trump administration had the top Iranian general killed when he was visiting Iraq and falsely accused the president of Venezuela Nicolás Maduro of drug running. Vox reported on March 25: “The Supreme Court handed down a unanimous decision that bodes ill for the future of civil rights and they have rolled back any slight gains that were made to curtail climate change and the list goes on and on.”

It would be no surprise if the Trump administration used the pandemic as an excuse to cancel the presidential elections.

And while revolutionary communists rarely believe that the ballot box is a source of fundamental change, the question must be raised: Should the left go all out to get behind a Medicare-for-all president despite what the primaries or the Electoral College say?

Bernie Sanders is no Fidel Castro or Hugo Chávez.

Fidel and Chávez completely broke with the imperialist system.  They were for revolutionary socialism where workers controlled the means of production.  That’s not Bernie. He is a soft socialist who still believes that capitalism can somehow be reformed.

During the vote for the historic $2.2 trillion emergency relief act, to defend gig workers and other excluded workers, Sanders did threaten to hold up the bill. He called it what it is — a corporate bailout fund.

If COVID-19 has upended reality as we know it, then the masses of people can and must upend the political system as we know it and demand a government that will help solve the crisis, not exacerbate it. The pandemic has changed the rules, and it must be the working class who now make the rules.

In the meantime, workers do not have to depend on any politician to fight for their right to live. We can look to the Amazon and Whole Food Market workers and the rent strikers, the health care workers, the activists organizing car caravans to prisons to demand #FreeThemAll to let the zealots in the White House know that we will not take this crisis passively or apathetically.

In the seeds of this kind of resistance is the future where the coronavirus pandemic became the opening of not a dismal chapter for humanity, but one where the sun shone through to light the way to worldwide revolutionary socialism.