The following WW interview was conducted by WW Managing Editor Monica Moorehead via Facebook Messenger on April 2 with a Palestinian activist in Gaza, Muhammad Khalid Qudaih.

The U.S.-backed Zionist siege of Gaza has been in place for almost 13 years. Pippa Bartolotti, former leader of the Green Party of Wales, stated in a Feb. 9 article about the Israeli blockade on Gaza: “The World Bank estimated in 2015 that [Gaza’s gross domestic product] losses caused by the blockade since 2007 were above 50 percent and entailed large welfare losses. Gaza’s manufacturing sector, once significant, shrunk by as much as 60 percent in real terms due to the wars in the past 20 years and the blockade.

“Three out of four people in Gaza are refugees. Unsafe drinking water has led to a worsening health crisis. Gazan children suffer from diarrhea, kidney disease, stunted growth and impaired IQ. Twenty years ago, 85 percent of Gaza’s drinking wells were too contaminated for human consumption. Today, that figure is 97 percent.” Read the entire article at tinyurl.com/tyzxy3a/.

The Chinese government delivered 10,000 coronavirus testing kits and ventilators to Palestine on March 31. 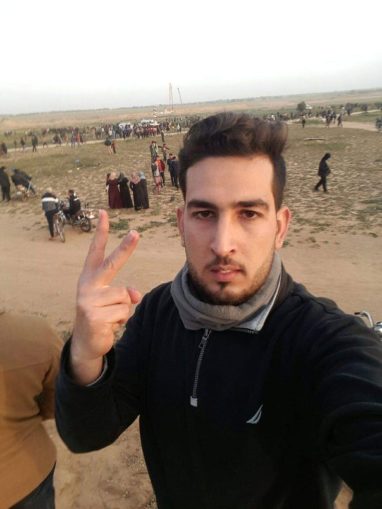 Workers World:  What is your name and where do you live?

Muhammad Khalid Qudaih: My name is Muhammad Khalid Qudaih.  I am 23 years old. I was born in Gaza and live in Gaza. I have a diploma in engineering which is in interior design.  My full-time work now is as an advocate in an Al- Awda camp for the poor and children. It is also a camp where many poor people live who lost and had their homes destroyed in the wars in Gaza by the Israeli military.  Everyone knows that the Gaza Strip suffers from a comprehensive blockade by Israel.

WW:  Gaza is considered to be the world’s largest open-air prison due to the Israeli settler occupation.  Can you describe what conditions Palestinians face like yourself living under the Israeli blockade?

MKQ: This blockade made living in the Gaza Strip like living in a large prison.  It is forbidden to enter with food aid, but Israel is allowed to bombard homes, kill children and youth, wound many, cut off electricity and have a shortage of clean water.  The unemployment rate is 90 percent in Gaza.

WW:  Can you talk about the goals of the Land Day protests that took place on Fridays from March 2018 until March 2019 and their significance?

MKQ: The goals of the march were the return of the Palestinian cause and the right of return to the Palestinians, to cause an embarrassment to Israel in the international arena because the Palestinians succeeded in photographing its army firing to kill and wound Palestinians. Actually, the occupation forces killed 22 civilians in one week and wounded about 1,500 overall in crimes described as excessive force. 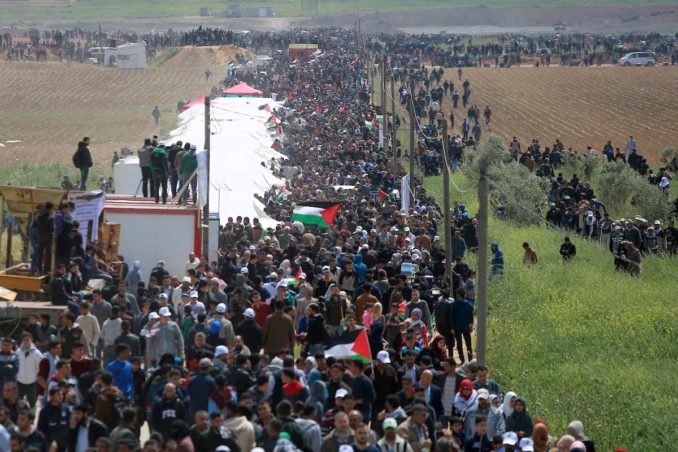 [The goals are] to make again the issue of the blockade of Gaza and the humanitarian crisis there the forefront of global attention; to put more obstacles in the way of the so-called “century deal” for President Donald Trump; to convert the eastern, southern and northern borders of Gaza into new centers of friction between the Palestinians and the Israeli army; and to restore the popular character of the conflict that the Palestinians are waging.

WW:  What is the return camp?

MKQ:  The return camp is where many poor people live who lost or [had homes] destroyed in the wars in Gaza. A return march on Earth Day (April 22) will be the largest witness and a reminder to the world of the size of the Palestinian catastrophe and the extent of the suffering of those who have lived under siege for over ten years.  From their villages and homes, they can see their homeland with their eyes, but they cannot return to it. This camp remains open to anyone who needs help.

WW:  What impact has the COVID-19 virus had on the Gaza population which already suffers from an inefficient health care system and other severe lack of infrastructure due to the occupation and military attacks?

MKQ:  COVID-19 has hit Gaza, so Gaza has started building 500 quarantine rooms in preparation for resisting COVID-19 cases. I know it’s not quite suitable for coronavirus issues, but these are Gaza’s only capabilities! These rooms will still need beds and medical supplies.

WW: The U.S. government gave Israel close to $4 billion in foreign aid alone in 2019.  That amounted to $10 million a day from U.S. taxpayers to maintain Israel’s racist domination against not only Palestine but the entire oil- rich region known as the Middle East.  What message do you have for the people of the U.S. who want to oppose this U.S. support and show solidarity with Palestinians’ right to reclaim their homeland?

MKQ:  Thank you to whoever has a feeling for the oppressed people, and thank you for your interest in Gaza. Thank you to the world.