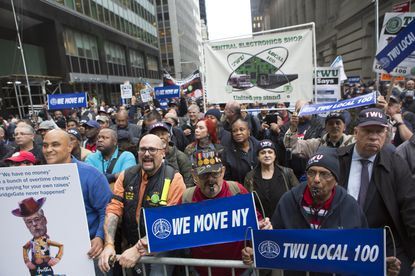 It revealed: “New York City has millions of square feet of office space to accommodate its more than 305,000 municipal employees — and a space-saving initiative aiming to cut the size of cubicles and make even more room for thousands of new workers.

“To make room for more workers, the city’s Department of Citywide Administrative Services changed its space standards, cutting workstation sizes from 6 feet by 8 feet or 6 feet by 10 feet to a standard 6 feet by 6 feet, city officials said.

This makes it very difficult for workers to maintain the six-foot distance apart at all times.

A city employee, who was ordered to work despite the city shutdown, complained to this reporter that it took municipal unions two weeks to successfully force Steven Banks, of the city’s huge Human Resources Administration (HRA), to rescind his order that had banned HRA workers from wearing masks. This worker also said that an African-American female administrative worker, a shop steward in his union and of the Queens community who worked at Elmhurst Hospital, died March 30 of COVID-19.

In addition, city government “is falling far short of the state’s edict that 75 percent of nonessential workers telecommute, prompting fears from union officials that scores of city workers are being needlessly exposed to the coronavirus.” (Daily News, March 19)

Henry Garrido, executive director of the American Federation of State, County, and Municipal Employees District Council 37, the union representing nearly 150,000 city workers, said: “There appears to be a lot of institutional  resistance to working from home.” Garrido cited as an example a city administrative bulletin that says workers who have “had close contact” (less than 6 feet for more than a few minutes) with someone who’s tested positive for coronavirus “can keep working.”

One veteran worker at the Department of Social Services who suffers from high blood pressure and diminished kidney function told the Daily News that when he requested to work from home, citing advanced age and pre-existing conditions that put him at greater risk, his boss denied the request, in violation of the Americans with Disabilities Act.

The Chief newspaper of March 30 featured  an article titled “Layoffs a Possibility in City and  State Due to Virus’s Economic Toll.” New York Mayor Bill de Blasio has ordered agency heads to come up with a combined $1.3 billion in budget cuts. According to The Chief, “One of those victims [of covid- 19], Harry Nespoli, sanitation workers’ union president and chair of the NYC public sector workers coalition in the Municipal Labor Committee, after saying his condition was improving, complained, ‘It’s not right what they’re doing to New York City.’ ”

Sometimes city sanitation workers who finish their routes early but have not been adequately provided with masks and gloves are forced to linger in dilapidated, undersized garages and locker rooms where it’s impossible to accommodate  six-foot social distancing.

This is in violation of the Teamster union contract, which stipulates: “The  Employer and the Union shall conduct periodic inspection of all facilities which house Employees in order to ensure that all such facilities are adequately maintained and provide sanitary working conditions. Where deficiencies are found and/or repair necessary, the Employer will take steps to make such repairs immediately. Since there is a large backlog of needed repairs … if the repairs cannot be made or funds  are not available, and the conditions at the location are such that they constitute a hazard to the life, health, or safety of Employees, the Employer will take immediate steps to transfer all Employees to a more suitable location.”

The New York City government is also in violation of the 1970 Occupational Health and Safety Act which, like the sanitation workers’ contract, guarantees the right to a workplace that doesn’t make workers injured or ill.

Without struggle, there is no progress

After six transit workers had already died of COVID-19, John Samuelson, president of the Transport Workers Union, told Channel 5 on March 29: “There was a dispute about masks. The MTA [Metropolitan Transportation Authority] said masks were inappropriate for transit workers to wear. It took weeks and threats to the MTA to get masks. Our workers still don’t have gloves. This subway system is the greatest spreader of this disease. Whatever equipment we need better be there. We are not going to be used as cannon fodder.”

TWU Local 100 also forced the MTA to allow people to ride the buses for free, using the side exits/entrances to provide safer social distancing and protect both passengers and bus drivers. People with mobility disabilities can still board as usual.

The MTA would do well to heed Samuelson’s warning. TWU 100 has hit the bricks with great strikes in 1966, 1980 and 2005 in defiance of New York State’s anti-labor Taylor Law, which deems illegal all strikes by public sector workers.

In New York, when sanitation workers were ordered earlier this month to service a quarantined yeshiva where students had tested positive for the coronavirus, they refused, even after being offered masks.

Sanitation workers have a rich history of fighting for their safety. Their work is among the most dangerous of occupations. Many become disabled for life, others are killed doing their job of collecting garbage, clearing and plowing snow, and making our communities cleaner and healthier.

In 1968, two days after a New York sanitation workers’ strike ended, the predominantly African-American sanitation workers in Memphis, Tenn., also walked out. The union on the ground was AFSCME Local 1733. This was the famous “I Am a Man” strike, which the Rev. Dr. Martin Luther King Jr. was supporting when he was assassinated.

Earlier, two African-American sanitation workers, Echol Cole and Robert Walker, had been crushed to death in one of the city’s outdated trucks. Memphis had no facilities for Black workers to wash up, change clothes or get out of the rain. Cole and Walker had been sheltering from the rain inside the truck’s barrel when its compacting mechanism malfunctioned. The truck hadn’t been repaired because the city wouldn’t spend money on safety for these workers. It took almost 50 years for  their families to receive their pension benefits.

During the two years after the New York City and Memphis strikes, sanitation workers in Baltimore, Washington, Charlotte, Atlanta, Miami and Corpus Christi all went out on strike.

Labor needs to employ Frederick Douglass’ great rallying cry, “If  there is no struggle, there is no progress,” and stop the bosses from using this pandemic to avoid accountability for our safety.