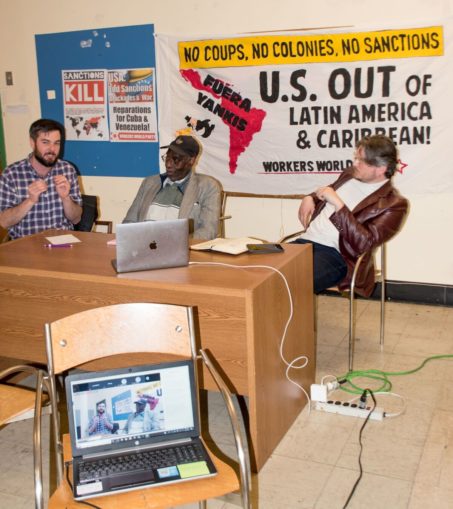 The Sanctions Kill movement in Philadelphia is undeterred in its commitment to expose the truth about genocidal imperialist sanctions that the U.S. imposes on over one-third of the human population. But in this time of historic crisis activists must heed the warnings of health care workers telling us to take extraordinary measures to stem the spread of the COVID19 virus.

The Philadelphia International Action Center, in conjunction with Workers World Party and twelve other groups, went forward March 13 with a planned Sanctions Kill panel discussion – only online rather than in person.

Sanctions Kill is an international campaign endorsed by hundreds of organizations around the world, aimed at organizing a unified challenge to the U.S. empire’s stranglehold on the global working class. The Philadelphia panel discussion was one of many events called over the weekend of March 13-15 and featured Hyun Lee with Philadelphia Korea Peace Now!, Godfrey Sithole of the African National Congress, Indigenous organizer Carmen Guerrero with Coalición Fortaleza Latina, MOVE Minister of Confrontation Pam Africa, and Scott Williams of the International Action Center.

Leading off the program, Williams stated: “This pandemic underscores why we need to say sanctions are an act of genocide. Sanctions are war — not an alternative to war.” He read off the list of 39 countries from Belarus to Zimbabwe that suffer from what is effectively a blockade on medical supplies, food and other resources necessary for any functioning society. “The people of Iran in particular have been placed in a desperate situation because of U.S. sanctions, as hospitals run dangerously low on medical supplies and equipment,” Williams concluded.

Hyun Lee detailed the incredible achievements of the Democratic People’s Republic of Korea despite decades of U.S. sanctions. All workers and oppressed people should be inspired by the resilience of Korean workers, particularly during the period known as the Arduous March, when the dissolution of the USSR coincided with disastrous floods beginning in 1994 that devastated the country’s agricultural output.

An important distinction about the nature of sanctions was raised by Sithole, an ANC member who was forced to flee South Africa to Tanzania as a refugee in the early 1960s. The international anti-apartheid movement called for sanctions against the Boer settler state, much in the same way that Palestinians and their allies around the world engage in the Boycott, Divestment and Sanctions movement to fight back against the Zionist settler state. This tactic should not be confused with imperialist sanctions imposed upon colonized nations and countries which refuse to bow down to the U.S., which are the target of Sanctions Kill.

Sithole took time to mention that for as long as there was resistance to apartheid there were LGBTQ2S+ freedom fighters in the movement, even if these individuals were forced to remain closeted because of bigoted colonial mentalities that had not yet been addressed.

Speaking as an Indigenous woman from a colonized continent, Carmen Guerrero focused her talk on the ecological and environmental devastation caused by sanctions and imperial occupation. The destruction of the land, water and air and of the ability of people to feed themselves and their families is yet another genocidal aspect of sanctions.

The MOVE Organization, founded by its late Coordinator John Africa, has for decades fought against environmental destruction, animal cruelty, racism and state violence. Pam Africa spoke personally as a resident of the West Philadelphia neighborhood that was completely occupied and blockaded by the city and police in order to starve out the MOVE Organization. It was through neighborhood solidarity and individual workers willing to break through police checkpoints that  MOVE was able to survive this period, only later to be attacked with gunfire and firehoses in 1978 and ultimately firebombed by the city government in 1985.

Workers around the world face threats that are truly historic and unprecedented: cataclysmic climate change, a powerful and increasingly desperate global empire headquartered in the U.S., and now a viral pandemic that has already claimed the lives of over 6,500 people around the world. Socialist states like China, Cuba, Vietnam and the DPRK have admirably responded to these threats.

It is clear now, perhaps more than ever, that the only way to save humanity and bring about a just and sustainable future is to wage war against the ruling class — one that would rather we die sick and in poverty than relinquish an iota of comfort and power.