These edited remarks were given by Workers World Party’s First Secretary Larry Holmes at a public meeting on March 5 in New York City.

First a word about the coronavirus (COVID-19).  It is going to become a big political issue even more than it is now. It involves the world capitalist economy. Plants are shut down; production is shut down.  The supply chain that globalized imperialism depends on has been seriously disrupted. Small businesses and big businesses are affected. 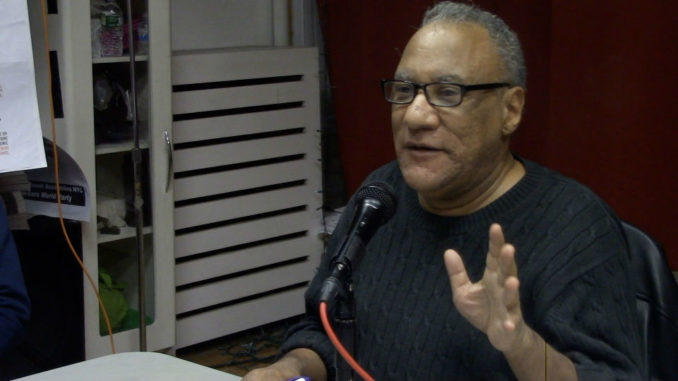 The financial markets over the past week and a half haven’t seen losses like this since the 2008 financial crisis, with 1,000-point fluctuations.  The stock market rose 1,000 points yesterday (March 4), but went down today. I think it rose yesterday because Joe Biden seems to be doing well. But the ruling class can’t really do anything to stop it.

The Federal Reserve Bank and the central banks have put the financial system on life support for the better part of 10 years.  We need to look at this very carefully because it could be the beginning of a new world capitalist crisis. Even though the virus is the catalyst, the impact that it’s having on the economy is significant.

The  economy has been on life support — especially the financial markets, where governmental banking agencies have been pumping in free money for people to borrow. It’s been an enormous, frightening bubble looking for an excuse to start blowing up.  The coronavirus may be the final straw that could break it.

If the U.S. economy begins going down, the Democratic Party leadership may regret what they are doing to Bernie Sanders at a time when the economy is slipping into an even deeper crisis. It’s not only the inequality and low wages here, but people are being laid off and businesses of all sizes are closing down. That’s a whole other level of crisis that could be in the offing.

When something like that happens, sometimes the ruling class wants somebody like Sanders, like FDR [Franklin Delano Roosevelt] to come in and do what they can to make sure the masses don’t rebel and want socialism.

We know what happened on Super Tuesday. Sanders did not do as well as people expected him to do. Most Democratic presidential candidates have gotten out of the race from [Michael] Bloomberg to [Elizabeth] Warren. Most of them immediately supported Biden, with the exception of Warren. We can only view this as part of the panic by the Democratic Party establishment who saw that Sanders was doing very well.  Party leaders were ready to push Biden aside because he didn’t seem to be a very effective candidate and has many weaknesses. Then they panicked about Sanders and figured that they had to come together and back Biden. This change happened this week. The media changed, too.

There is an element of fear that some voters had about Sanders. It’s not their fault because the bourgeois media feed them the idea that Sanders can’t win.  Members of the ruling class in both parties are threatening to beat him into the past century. They don’t want him to be the nominee. It’s not that he can’t win. It’s that they don’t want to have anything to do with anything called socialism — even if it’s not really socialism. They don’t want to make any concessions to the working class. They want to keep the wealth that they’ve extracted and robbed from the workers and the oppressed worldwide.  That’s the real factor. It is not over.

We’ll see what happens in the upcoming primaries in Michigan and Illinois.  There may be more surprises, but the Democratic Party leadership may do what they did in 2016 — and that is crush the left wing of the party and usher in the neoliberal capitalist, imperialist wing. Sanders is not necessarily anti-imperialist. There are contradictions.

Our view of why the Democrats lost in 2016 wasn’t because of Russia, but because they abandoned the working class — and not just for a few years — but for decades at a time of globalization, neoliberalism, austerity and union busting.  The Democrats paid the price. They helped Trump get in.

Looking at some of the things that happened in the election; it’s important for us to be clear and honest. A party that’s struggling to be a party of the working class, like ours, has to neither fear nor deny the weaknesses of the working-class movement in our country. We have to accept them and assess what can be done about them.

Default party of the masses

The Democratic Party has been the default party of the masses for nearly 100 years, at least since the New Deal and FDR.  Then the ruling class were worried about the workers rising up and making a revolution or — at the very least — breaking with the bourgeois parties and forming a Labor Party or a social democratic party or a revolutionary party.  At that time, the bosses said the workers shouldn’t be class conscious and shouldn’t break and form their own party and be independent. They said we are giving you the Democratic Party. It is your party.

And that’s the way it’s been for a long time, and it’s hard to undo that. There have been efforts to undo that.  For the left to break, for the working class to break, there has to be a break of oppressed people. Jesse Jackson’s campaign was one such example. Maybe such a movement would have developed, not led by him, but by some people who supported him 30 or 40 years ago. The effort to do that now could be much bigger and much more consequential.

But the point is to still understand the hold that the imperialist Democratic Party leadership has over the workers. What you hear ad nauseum is how the Black workers in the South are so loyal and voted for Biden.  One way to look at it — and it’s not the whole picture, but one dimension of it — is this: Older Black workers in Alabama, Georgia, Mississippi and South Carolina are old enough to remember apartheid and when they could not vote. They certainly know the oppression their parents and grandparents faced.  They see Trump coming in and giving a green light to white supremacy — and it scares the hell out of them. Part of the vote for Biden is their reaction to Trump.

When Rep. Jim Clyburn from South Carolina, probably the highest-ranking and most influential Black congressperson, publicly endorsed Biden a few days before Super Tuesday and the primary in South Carolina, we knew it would affect the vote.

Congressman John Lewis is a hero, who was nearly beaten to death on the Edmund Pettus Bridge during the great march from Selma to Montgomery, Ala., in 1965. He has stage four pancreatic cancer, yet he had his staff drive him to the 55th anniversary of that historic march.  He got out of the car and said people have to vote like they have never voted before. What he says has a lot of credibility. Just look at what happened in the South and other areas on Super Tuesday.

That’s one dimension of it; another dimension of it is this:  Many younger Black people may not agree with that and have other feelings about it. The question is whether they can assert themselves with or without the help of more radicalized elements in the working class.

Another interesting dynamic is that the Latinx community, especially the younger members, are more in favor of Sanders.  They have a different experience. Many of them are recent migrants. They’re not so anticommunist because of where they come from.  That’s a problem for the Democratic Party leadership.

The fact is that the official labor movement leadership in the U.S. is to the right of Sanders politically.  Sanders is way to the left of them. One would think that the labor movement would support Sanders. His program is much better for workers.

But no. Top labor leaders are afraid of Sanders. This is a huge contradiction that’s held back political and class consciousness in this country. It is a big factor. Also Sanders has his own contradictions. He may be very good on some issues but not all. We learned this four years ago.

Sanders seems to be very dismissive of racism and the national question. He’s not unlike a lot of those in parties and forces in the global working class that consider themselves pro-working class, including some Marxists, who are dismissive of the struggles of people of color, women and queer people.

When Elizabeth Warren and Kamala Harris dropped out of the race, Sanders said little about it. He didn’t say it is very unfortunate that the women who were in the race were forced to drop out. But we would be kidding ourselves to say that had absolutely nothing to do with patriarchy and misogyny.

If Sanders had admitted that link, it might have gone a little way in terms of the women who were for Warren because they were hopeful that she could be the first woman president.  But that’s not how he thinks. If Sanders doesn’t say more about it, he’ll suffer the consequences.

What is WWP’s program and what are its long-term goals? Why should we not try to find a way to intervene, rather than just wait for the outcome of whoever wins the nomination or election in November.

Some other formation that is independent, more pro-working class, more labor-oriented, maybe social democratic may come out of it. It’s not preordained, but this is so big — with the economic crisis, climate crisis, war crises and all of the other crises that are interrelated — that now is the biggest opportunity for a historic social and political break from the domination and control of the Democratic Party.

I hope that WWP will follow this carefully, comment on it and have a view to being in the revolutionary wing of it.