The constitutionally mandated State of the Union address opened Feb. 4 with the first of many boasts: “Jobs are booming, incomes are soaring, poverty is plummeting.” Trump went on with the lie, “The average unemployment rate under my administration is lower than any administration in the history of our country.” 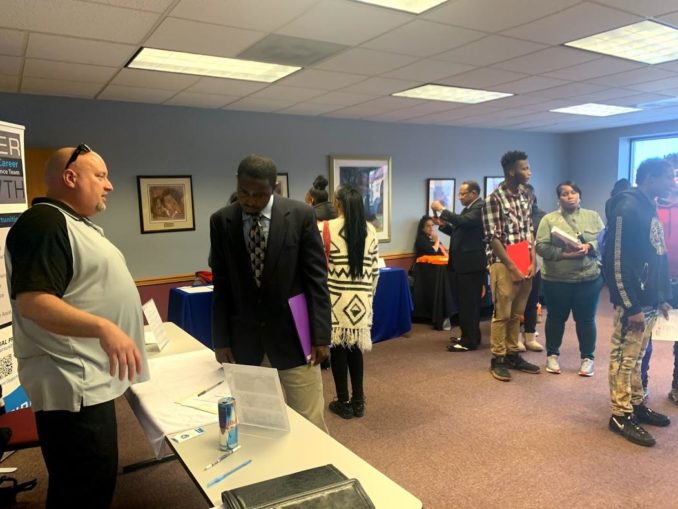 A Milwaukee, Wis., job fair in November 2019 verifies the fact that unemployment is high in Black communities in cities.

Actually, the current unemployment rate is 3.5 percent, greater than the 2.5 percent in 1953 under President Dwight Eisenhower, when the U.S. war on Korea stimulated the capitalist economy. But that’s not the worst distortion the president made. The real question is the ability of the new jobs to provide an adequate income.

While Trump’s tax cut gave a tremendous trillion-dollar boost to the incomes of the wealthy, some 38.1 million people still live below the federal poverty threshold in the U.S. As per the U.S. Census Bureau, that was $25,465 for a family of four people in 2018.

These researchers say the lower average workweek in low-wage jobs reveals an enormous “slack” in the total number of jobs seen as available — and that’s a weakness in the economy. They calculate that if these 60 million low-wage workers, who are now underutilized, worked the same 38.26 hours weekly as high-wage workers, this would translate into 12.6 million more jobs at 38.26 hours weekly. (Pamphlet available at www.jobqualityindex.com.)

The official unemployment rate hides these 12.6 million missing jobs that would exist if the capitalist economy was really thriving. This analysis explains why so-called “full employment” has actually meant weak wage growth. There is a lot of slack in the job market; 12.6 million full-time jobs are needed to absorb the “reserve army of labor” stuck in part-time work.

Moreover, workers who are in unstable or precarious jobs — many of whom are Black and Latinx workers and women workers — are in a difficult position to demand more pay. Difficulties in union organizing of precarious workers have kept wages down. And the gig economy includes more than 57 million U.S. workers, or 36 percent of the total workforce, which plays a big role in keeping wages low. (Forbes, Aug. 31, 2018)

What is even more shocking is that 40 percent of all young workers — between the ages of 26 and 32 — do not know from one week to the next what their hours will be.

The Fight for $15 per hour, which unions have been waging, has led a number of states and cities to increase their local minimum wage. These increases have boosted the national income figures for low-wage workers, which Trump’s boasting ignores. The federal minimum wage has been $7.25 an hour since 2007.  To no one’s surprise, Trump’s State of the Union speech made no mention of raising it.