China is showing the world what is needed — and possible — to combat the outbreak of a new, highly contagious virus.

The steps China has taken around the coronavirus are unheard of in capitalist countries. They reaffirm the basic socialist character of the Chinese state. In a crisis or emergency, the welfare of the people comes before capitalist profits. 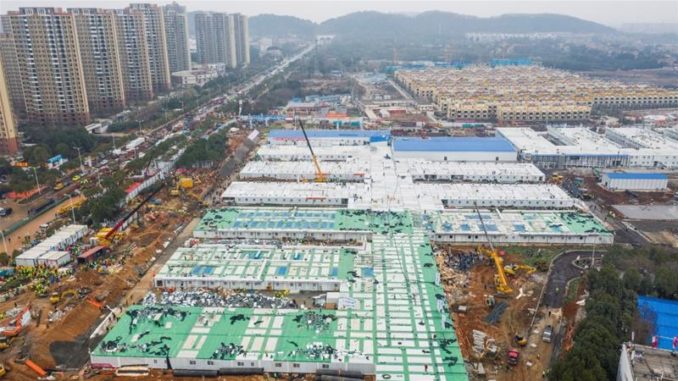 Chinese workers built the 1,000-bed Huoshenshan hospital in the city of Wuhan in 10 days.

A capitalist class exists in China. There are millionaires and even billionaires. But in a crisis, the Communist Party controls the state and has the leverage to make decisions not dictated by capitalist profits.

Starting three weeks ago, China imposed a limited quarantine on 35 million people in Wuhan city and Hubei province. That has now been extended far wider and restricts all unnecessary social interaction until more is known about the virus.

Lunar New Year celebrations were canceled nationwide. Schools, factories and workplaces were closed an additional week to control contagion. The whole population was asked to self-quarantine and limit social interaction. Only food deliveries and other essential services continued nationwide.

China has made an all-out effort to learn and share with the world the genome of the virus, how contagious it is, its symptoms, what organs it attacks, the mortality rate, and what treatments or combinations of treatments are most successful.

Why China is so concerned

Worldwide, influenza causes up to 5 million cases of severe illness annually, killing up to 650,000 people, according to the World Health Organization. Some viruses are new and more dangerous than others because humans are not yet immune to them and vaccines have not been developed to control their spread.

The H1N1 swine flu virus, which began in the U.S. in 2009 and spread worldwide, infected more than 1.63 million people and caused 284,500 deaths, with a fatality rate of 17.4 percent. No efforts were made by the U.S. government to slow the spread of this particularly dangerous flu, which especially targeted young people.

China’s massive efforts around the current outbreak of the coronavirus, however, have restricted the fatality rate so far to around 2.1 percent — lower than usual for a new disease. By Feb. 1, the number of people cured in China exceeded the deaths, indicating that the epidemic is controllable. But it is not yet controlled, and determined work is continuing, including building solidarity with Wuhan.

Each day new medical teams go to Wuhan and Hubei from other parts of China. More than 6,000 medical staff arrived on Feb. 9, following a national call for “pairing-up support for Hubei.” One-on-one support systems have been established in 16 provinces and municipalities to help cities in Hubei battle the epidemic.

Faster diagnosis and treatment plans are being aggressively tested and immediately disseminated worldwide.

What China is doing stands in sharp relief to current U.S. policies. In an emergency or crisis in the U.S., maintaining property relations is the first and strongest consideration.

Time and again, National Guard units are mobilized to stop desperate people from “looting” stores for needed supplies or to keep people fleeing floods and earthquakes from moving into unoccupied hotels and resorts. But no government measures are taken to stop businesses from hoarding, speculation and price hikes. Even food, water, blankets and generators donated to charities can end up sitting in warehouses.

This happened when Hurricane Katrina flooded New Orleans in 2005, and happened again in the U.S. colony of Puerto Rico with the disastrous hurricanes of 2017 and recent earthquakes, as well as the fires in California in 2018 and 2019. Millions are left on their own to survive as best they can in armories and overcrowded stadiums.The  Federal Emergency Management Agency and the Red Cross are immediately overwhelmed.

Those with resources can leave the area, try to rebuild their lives, file insurance claims and wait years for settlements. But orders to evacuate don’t help people without cars or with nowhere to flee.

When a contagious virus causes a health crisis, millions still go to their jobs sick because more than 40 million workers in the U.S. lack paid sick leave. Staying home to care for sick family members means many workers are at risk of losing a job. Advice on what to do is limited to telling people to get a flu shot, along with a series of ads for cough drops and fever meds.

Spending government funds in preparation for an impending health crisis or natural disaster is just not on the U.S. agenda.

So far this winter the flu virus has sickened 22 million people in the U.S., with 210,000 hospitalizations and 12,000 deaths, according to the Centers for Disease Control and Prevention. But no special provisions are being made, even though the death toll here already far exceeds the 1,000 coronavirus deaths in China.

Hospital emergency rooms across the U.S. are already overwhelmed, according to the Feb. 8 New York Times. Vital medical supplies, including medications, ventilators and respirator masks, are in critically short supply. To maximize profits and cut costs, large for-profit medical conglomerates with hundreds of hospitals keep inventories of even basic items like masks, gowns and gloves in short supply.

But the idea of shutting down factories, schools, shopping malls, movie theaters, restaurants and sports arenas to save thousands of lives is inconceivable.

China just built two major hospitals in 10 days, with a combined capacity of 2,600 beds. It has mobilized thousands of health care workers. How? Through socialist planning and the cohesive leadership of the Communist Party.

Thousands of medical volunteers have responded to the government’s call to assist in Wuhan. With mass transit shut down to lessen contagion, squads of free taxis are operating for those who need health care or shopping. Food is easily available and quickly delivered. Fresh fruits and vegetables are being shipped in. There are no desperate people breaking into shops for food.

As of Feb. 10, Beijing’s vast subway system is operating again. Subway stations and train compartments are disinfected every hour.

China Global Television Network, CCTV English, Peoples Daily and Global Times provide up-to-date information. Coverage focuses on the role of science, technology and a broad-based people’s campaign to adhere to the quarantine and observe strict health measures. The shortages, price spirals and mass chaos predicted by the U.S. media are not happening.

Why capitalism can’t do this

When the Chinese government imposed a partial quarantine on the 35 million workers in Hubei province, it also declared that rent and payments on loans and credit cards were frozen.

Could a capitalist government do that? Would capitalist banks tolerate freezing credit card debt, car payments, insurance premiums and mortgages?

Would the mega sports entertainment industry tolerate canceling the Super Bowl or other professional sports events that generate billions in advertising revenue?

Would corporate giants allow major factories to temporarily close when profitable orders were waiting to be filled? Every week that Chinese factories are closed cuts $26 billion in world trade. (New York Times, Feb. 8)

Would the pharmaceutical industry allow essential medicines to be distributed at cost or free? This industry is the most profitable sector of the U.S. economy, with the highest prescription drug costs in the world. Millions of adults in the U.S. skip their medications due to high prices, according to Harvard Health Reports.

But rather than spend billions to improve health care or basic infrastructure, Washington lavishes money on military bases to surround China and new weapons to threaten the world.

Workers here need to know the truth about China and demand the levels of health care, monitoring and national planning that everyone has a right to expect.