May 9 marks the 220th anniversary of this great abolitionist’s birth. This article was originally published in Workers World on Sept. 14, 2006.

Many historians agree that the Civil War really started on a flat patch of land known as “Bloody Kansas” 150 years ago, in the spring, summer and on into the autumn of 1856. 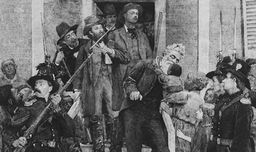 A depiction of John Brown moments before execution, Dec. 2, 1859.

This area of land covering some 82,000 square miles now sits at the geographic center of the continental United States. It rarely gets national attention these days, and when it does it’s usually for reactionary developments, like the effort to ban evolution from the public schools’ science curriculum.

Yet this was once the hub of the most important political conflict of its day, indeed of all U.S. history: the struggle over slavery. This was where diametrically opposed forces — abolitionists and pro-slavers — clashed.

When 1856 began, the pro-slavery forces had looked to be ascendant. Congress had passed the Kansas-Nebraska Act on May 30, 1854. The law provided for popular sovereignty — voting by white male landowners, that is — to decide whether Kansas and Nebraska would be free or slave states. Kansas had since been the scene of a violent terror campaign, based across the border in Missouri.

Death squads, known as Border Ruffians, aimed to kill or drive out those who opposed the spread of slavery to Kansas, and to flood the territory with their own numbers. Jesse and Frank James, glorified as “rebellious” outlaws in the movies and folklore, were the most well-known of these ruffians.

The Border Ruffians hunted down and murdered African Americans who had escaped slavery and were heading north to Canada. They brazenly assassinated Underground Railway station operators and anti-slavery newspaper editors.

It had started to seem like a foregone conclusion that Kansas would enter the union as a slave state. Then John Brown arrived.

With a small, brave band of stalwarts, he took on the slave owners’ death squads in direct combat, and bested them. He revived and rallied the anti-slavery forces.

At the Battle of Osawatomie, on Aug. 30, 1856, his brilliant tactical maneuvers led to the defeat of a pro-slavery force of 300 soldiers by his group of under 20 — and from then on he was affectionately known as “Old Osawatomie” by admirers around the country.

In Lawrence, Kanasas, in the first two weeks of September, he led the military defense of the state capital against a pro-slavery assault — and ever after was respectfully called “Captain Brown” by those who fought alongside him.

But before Osawatomie, before Lawrence, John Brown had already become a legend. That happened at Pottawatomie Creek.

At Pottawatomie on the night of May 24-25, 1856, John Brown led an armed band in a lightning raid against an encampment where he knew he’d find several of the worst of the Border Ruffians who were terrorizing the territory.

When Brown and company rode off, they left the dead bodies of five racist thugs. The criminals Brown and his band killed had been responsible for many assaults and murders; they were also known for capturing Native women and forcing them into prostitution and sexually assaulting Free State women.

Until Brown acted, the slavocracy had been waging an undeclared war with what seemed like impunity. And not just in the fields and towns of Kansas. On May 22, two days before Brown rode to Pottawatomie, Preston Brooks, a member of Congress from South Carolina, had strode onto the floor of the U.S. Senate and beaten anti-slavery Sen. Charles Sumner of Massachusetts nearly to death as retaliation for Sumner’s speech “The Crime against Kansas.”

After Pottawatomie, all this changed. The slaveocracy did not surrender — it would take the Civil War for that. But from Pottawatomie word went out.

No longer would the racist death squads have free rein in Kansas. A new force, a force for freedom, was fighting back.

For years afterward, in fact to this very day, bourgeois historians have misrepresented what happened at Pottawatomie. It has been portrayed as an insane, isolated event, as a senseless, inexplicable act of violence — and its perpetrator as a wild-eyed, crazed, fanatical maniac. The official bourgeois version removes the Pottawatomie raid from its historic context — the bloody terrorist war the Border Ruffians were waging — and omits the fact that the men Brown’s troops killed were racist murderers.

John Brown was no lunatic. He was a hero. By first frost in the fall of 1856, he had accomplished what six months earlier no one thought possible. The territory had been secured. Kansas would enter the union as a free state.

The victory came at a high personal cost for Brown. His son Frederick died at the Battle of Osawatomie. Another son, John Brown Jr., was captured by the pro-slavery forces and tortured horribly while held prisoner, which led to many years of illness and anguish.

Brown himself was now a wanted man. A price on his head, he went underground, leaving Kansas. He headed toward the Northeast.

There he would spend the next three years raising funds, recruiting troops, writing, speaking and planning. His goal was nothing less than to launch a guerrilla war, whose leadership would be taken up by African Americans, to end slavery and establish full freedom and equality for all.

On to Harpers Ferry

Before, during and after his time in Kansas, John Brown was keen to learn how to wage the kind of guerrilla warfare he believed would be necessary to destroy slavery. To whom did he look as his teachers?

To Nat Turner, Denmark Vesey and other enslaved African American leaders of U.S. slave revolts; to the Seminole nation that had resisted domination by colonial settlers; to the Maroons of the South and of Jamaica and Surinam, escaped slaves who fought the settler state’s forces in daring raids from bases in the hills and mountains; and to Toussaint L’Ouverture, one of the great liberators of Haiti.

Most well-meaning whites, including abolitionists, were under the sway of racism to varying degrees. In contrast, Brown not only admired but sought to learn from and emulate Black and Native leaders. He was that free of the taint of racism.

In Kansas, Brown worked closely with a Native ally, Ottawa Jones, who sheltered, fed and helped arm Brown’s group at several points during the months of conflict. Although he himself was a fiercely devout Christian, Brown counted Jews and atheists among his troops.

For three years after leaving Kansas, Brown was based in North Elba, N.Y. [in upstate New York].There he established a cooperative farming community, the first ever where Black and white families lived and worked as equals.

Along with farming and guiding escaped slaves along an Underground Railroad route across the border to Canada, Brown would spend those three years preparing for the action he was determined would give rise to a generalized mass uprising by enslaved Black people. He would write a new constitution for the United States which first and foremost proclaimed race and sex equality.

He would travel to Canada and recruit several African Americans, including Osborne P. Anderson, who would fight alongside Brown at Harpers Ferry, Va. (now W.Va.), and live to write about it. He would meet often with the great organizer and orator, Frederick Douglass, and the two would become close friends. Douglass had escaped from slavery as a young man.

He would confer with the “Moses” of the Underground Railroad, Harriet Tubman, whom he always respectfully referred to as “Gen. Tubman.” Some believe that Tubman helped plan the raid on the U.S. Army arsenal at Harpers Ferry and would have taken part in it had she not fallen ill.

African-American freedom fighters Dangerfield Newby, Lewis S. Leary, John Brown’s sons Watson and Oliver, and six others of their number would die at Harpers Ferry in October 1859. Five would escape and survive. Seven, including John Brown, would be captured and hanged.

Gen. Robert E. Lee, who scant months later would lead the secessionist Confederate army, led the opposing force that captured John Brown at Harpers Ferry. John Wilkes Booth, who would assassinate President Abraham Lincoln in 1865, was among the troops guarding the scaffolding on the day they hanged John Brown.

On that day, Dec. 2, 1859, just before they led him from his cell to the gallows, this great soldier for human liberation would write, “I, John Brown, am now quite certain that the crimes of this guilty land will never be purged away but with blood.” Brown was buried in the majority Black cemetery in North Elba, a fitting tribute indeed.

In April 1861 the Civil War would begin.