Published by Resumen Latinoamericano and translated into English by its North America bureau. Slightly edited by Workers World. The author is a Basque Marxist. He’s writing about an important anti-imperialist conference held in Caracas at the end of January and the five obstacles U.S. imperialism created as part of its relentless attack on revolutionary Venezuela.

Jan. 23 — The hostile reaction directed from abroad against the Anti-imperialist Encounter for Life, Sovereignty and Peace, held in Caracas on Jan. 22-25, demands thoughtful attention from all of us, especially from those who were not allowed to attend the event. 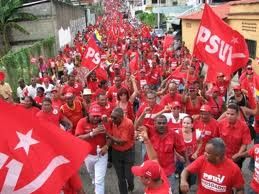 Members of the United Socialist Party of Venezuela (PSUV) in Caracas.

First: The boycott carried out by several airlines trying to prevent delegates from attending the event confirms the need to celebrate that it happened at all and that the United Socialist Party of Venezuela (PSUV) made a good move in organizing it.

Nowadays, we are facing several decisive battlefronts in the war between imperialism and exploited humanity.  Venezuela is one of them. Together with Cuba, it forms the most decisive front in the double task of restoring the emancipating forces of Our America and moving the revolutionary process to the offensive.

But Venezuela and Cuba are also important worldwide because, besides strengthening their alliance with other powers that are in one way or another confronting imperialism, and given their own diverse interests above all, these two countries also confirm the unquestionable historical lesson that the people’s sovereignty depends on its capacity for self-defence.

Bolivia’s catastrophe confirms history once again: Imperialism will never give up. It is always updating its counterattacks; it never ceases its destabilizing attempts to bribe and co-opt despicable people, getting mercenaries appointed to fulfill the orders given by the local bourgeoisie and by imperialism itself.

Second: For a while good people, revolutionary people, have been enduring airport restrictions and attacks on their freedom of communication, of movement, of attending events, debates and solidarity meetings. We face increasing repression directed against these rights. These repressive steps remind us of the desperate measures taken by many states that go back generations.

Let’s start with the prevention of any expression of solidarity during the Roman–Greek and medieval wars; the suffocating vigilance over enslaved people; the peasant wars; Andean and continental revolts; the first bourgeois revolutions; the beginning of working-class and popular movements — all faced every sort of obstacle. There were the 1848 repressive controls imposed on meetings to organize the First International and the siege during the 1871 Paris Commune.

Then came the anti-socialist laws of the late 19th century and the siege laid against the Second International and Third International. And today there is the obsession over limiting and silencing Cuba and Our America, which always fails.

Third: Everything indicates that the open repressive trend is speeding up. This time, imperialism coordinated sabotage against the anti-imperialist event taking place now in Caracas, getting civilian airlines from a third country not to process airline tickets to Venezuela.

Thus political-military commands have torpedoed foreign civilian companies, extending this attack to the basic human rights of travel and free speech. We are witnessing another leap forward in the recent process of coordinating repression carried out by secret services and international political bodies, confirming that imperialism’s nature is irreconcilable with the slightest democracy. This complexity is right now explaining this obsessive attack against the anti-imperialist event in Caracas.

Fourth: The capitalist economy nowadays and the power of the United States and the European Union are facing more and more serious obstacles. For instance, the giant global debt won’t stop growing, given the suicidal policy maintained by the large banking system during the last few years amidst what’s known as “cheap money.”

This debt represents about 320 percent of the world’s annual gross domestic product. According to the perspective of imperialism, there are only two ways to reduce it to a manageable amount: transferring it to workers, as well as to any competing powers that refuse to be pawns of imperialism.

But this is not the only existing threat. There are more. The most serious are the Law of the Tendency of the Rate of Profit to Fall and the General Law of Capitalist Accumulation [as explained by Karl Marx].

When the different levels of this crisis merge in a single collapse, imperialism has no other recourse than mass destruction of accrued value, or dead work, so that infrastructure and productive forces can try to start another phase of expansion. This is why they can’t stand it if people just gather to discuss a minimal step toward the people’s emancipation.

Fifth: Regardless of the repression and harassment, we must multiply these encounters, these debates. We must coordinate them and advance in the anti-imperialist practice, because every second we lose is a vital second we give to the imperialists to regroup and counterattack.