Workers and community groups held a spirited rally in front of the office of New York Gov. Andrew Cuomo on Jan. 30 to protest his veto of the Securing Wages Against Theft Bill. SWEAT legislation would give tools to workers and the New York State Department of Labor to stop bosses from transferring and hiding their assets to cheat workers out of the pay they owe them. (sweatnys.org) 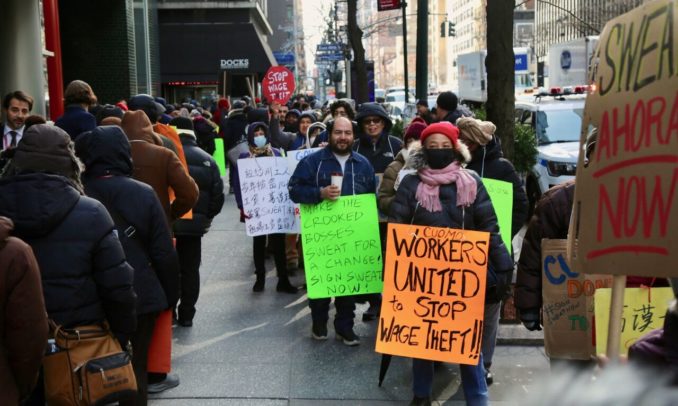 Protesters demanded, “Wage Theft Commander-in-Chief” Cuomo — who has shown he would rather aid and abet criminal bosses who refuse to follow labor law than workers — should right his wrongs and support the reintroduced SWEAT bill, A9008/S7256. The rally was organized by members of the SWEAT Coalition, grassroots organizations, workers centers, legal service providers and advocates, who are fighting to ensure workers in New York state are able to recover the wages which employers owe them.

— Photo and report by Brenda Ryan