Published in the Italian daily Il Manifesto on Feb. 4. Translation by John Catalinotto.

“A historically privileged relationship, which must be strengthened as much as possible.” This is how, during his Jan. 29-31 visit to Washington, D.C., Italian Defense Minister Lorenzo Guerini (of the Democratic Party — PD) defined Italy’s ties with the United States. 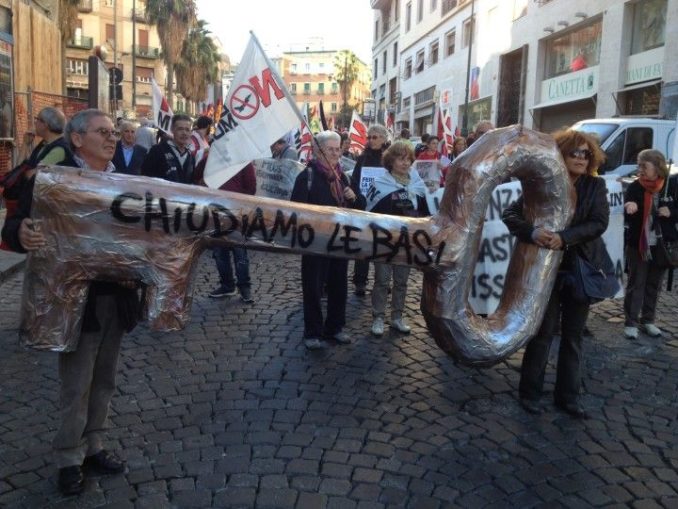 A demonstration against NATO in Naples, Italy, on October 25, 2015

U.S. Secretary of Defense Mark Esper called Italy a “solid NATO ally” which, hosting over 34,000 military and other Pentagon employees, “plays a vital role in our projection of force in Europe, the Mediterranean and North Africa.”

Italy’s role is more important than Esper himself says. Enabled by U.S./NATO headquarters and bases, the Pentagon can launch military operations from Italian territory into an area that extends from the Atlantic Ocean to Russia and, more to the south, to the whole of Africa and the Middle East. Always with the consent and collaboration of the Italian state.

“Both countries,” underlines the official Pentagon communiqué, “recognize the destabilizing influence of Iran in the Middle East and agree to continue to work together to contain the increasingly disruptive Iranian activities.”

The formal position taken by the Italian government (and therefore by Guerini himself) after the Trump-ordered killing of Iranian General Qassem Soleimani, and after the Iranians reacted, had underlined the need to “avoid further escalation and encourage a lowering of tension through diplomacy.” Thus Guerini cancelled this formal Italian policy.

Confirming that it is Washington and not Rome that decides, Guerini declared in the press conference at the Pentagon that “Italy has decided to stay in Iraq after a telephone conversation with Secretary Esper.”

Guerini, reports the Ministry of Defense, was also received by President Trump’s advisor Jared Kushner, “promoter of the recent peace plan for the Middle East.” In other words, the plan that creates a “Palestinian state” on the model of the Native “Indian reservations” created by the USA in the 19th century.

Minister Guerini also got some earfuls from U.S. Secretary of Defense Esper: Italy must do more to bring its military spending (now about $77 million U.S. a day) up to at least 2 percent of its gross domestic product  (about $111 million a day). It must also limit or ban the use of 5G Chinese technology, in particular Huawei, which the U.S. claims “compromises the security of the Alliance.”

Immediately afterwards, however, Minister Guerini had his greatest satisfaction: The head of the Pentagon thanked him for having strengthened Italy’s role as a fundamental partner of the United States in the defense industry, and for his strong support for the F-35 fighter program in which Italy, a second-level partner, “has made important investments in research and development.”

In Washington, according to a statement published in Rome, Minister Guerini met “representatives of the Italian defense industry and the main think tanks in the sector.”

Holding first place, certainly, are the executives of Leonardo — the largest Italian military company, in which the Ministry of Economy and Finance is the main shareholder.  Leonardo in the U.S. provides products and services to the armed forces and intelligence agencies, while in Italy it manages the Lockheed Martin F-35 fighter plant in Cameri.

Guerini also met in Washington with the managers of Fincantieri, over 70 percent under the control of Italy’s Ministry of Economy and Finance. In the U.S. the Fincantieri Marine Group builds coastal fighter ships for the U.S. Navy.

Four ships of the same type are now being built by the Fincantieri company for Saudi Arabia, under a $2 billion contract signed with Lockheed Martin.

Fincantieri, controlled by the Italian government, signed a contract last year to build warships for Saudi Arabia, even as Italy’s Lower House was passing a motion calling for an embargo on the sale of armaments to Saudi Arabia. The motion was tabled by the government majority.