Four members of the Embassy Protection Collective — Kevin Zeese, Margaret Flowers, Adriene Pine and David Paul — spoke in Philadelphia on Jan. 28. They were there to spread awareness about their struggle for Bolivarian Venezuela, as well as raise money for their ongoing court battle against the criminal Trump administration. The event was sponsored by the Coalición Fortaleza Latina PA, Black Alliance for Peace, the International Action Center and Workers World Party. 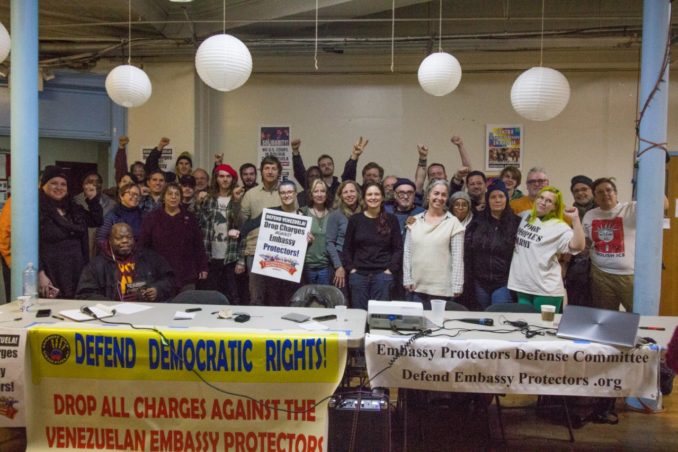 On April 24, 2019, the democratically elected president of Venezuela, Nicolás Maduro, recalled his diplomatic staff from the Venezuelan embassy in Washington, D.C. He gave the keys to a group called the Embassy Protection Collective in hopes that they could occupy and hold the embassy until a protective power agreement could come into play. That legal action would have prevented U.S.-backed anti-Maduro forces from taking over the embassy.

While inside, the embassy protectors were besieged by a pro-U.S. coup mob that refused to let anyone come through with food or water. The coup opposition in Venezuela is characterized by extreme right-wing positions on race and class, including promoting anti-Indigenous genocide. The opposition in D.C. frequently displayed these attitudes, exhibiting homophobia, transphobia, racism and sexism as well as committing physical and sexual violence. Many of the opposition mob looked like they had come for a vacation or on business, with some of them in suits and ties.

On May 16, 2019, the four embassy protectors remaining in the building — Zeeze, Flowers, Pine and Paul — were arrested under U.S. law, in violation of the Vienna Convention, which affirms the sovereign integrity of a nation’s embassy

These protectors now face an uphill court battle where it is anticipated that the judge will not allow them a “discovery phase” for evidence — thus setting up a show trial to guarantee they are convicted. The documents the embassy protectors seek to submit in discovery would prove their innocence under international law.

Information the jury would not be able to know includes that the four were allowed to be there by the democratically elected Maduro administration, which held sovereign power over the embassy.

At their Philadelphia presentation, the four talked about their experiences not only in the embassy but also when they travelled to Venezuela. Flowers noted, “What we hear in the United States about Venezuela is basically the complete opposite of the reality down there.”

– Report and photo by Scott Warren